The Westphalian Mining Trail is a 16 theme route one part of the Route of Industrial Heritage . On it, the mining facilities typical of the Ruhr area , such as collieries, miners' settlements, operating devices and heaps from the Westphalian region, are presented.

In the course of the decline of the coal and steel industry ( colliery dying ) and the structural change in the Ruhr area, the face of the area has changed, mining has migrated further and further north, and afterwards the colliery also went north. The typical appearance was not completely lost, however, because many industrial monuments of the mining industry have been preserved, have been extensively restored and given new uses such as museums, technology centers or cultural institutions.

The anchor points of the route include the German Mining Museum in Bochum and the Nachtigall and Zollern collieries as the locations of the Westphalian Industrial Museum and the Nordsternpark in Gelsenkirchen. This also shows that the term "Westphalian" is quite broad and refers more to the cities belonging to the Westphalia-Lippe Regional Association (LWL) than to the state of Westphalia.

Other points are the heaps heaped up from the overburden from coal mining, which have now been landscaped and artistically designed, the colliery colonies , which are largely listed , which were built for the miners close to their workplaces, and other mining facilities such as administrations, schools and processing companies.

as well as these locations of the LWL-Industriemuseum : 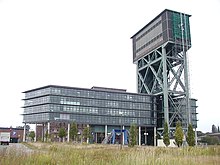 Tomson-Bock headframe of the Gneisenau colliery 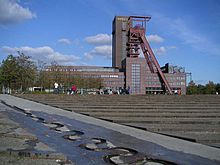 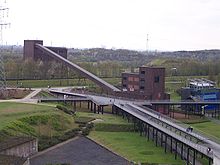 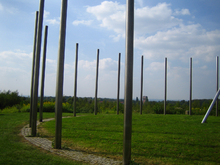 Sundial on the Schwerin dump 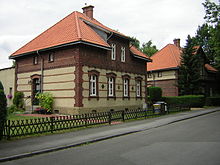 Typical house in the old colony of Eving

Tomb in the Ostenfriedhof in Dortmund