Steel box headframe from 1974 above shaft 2

The Hugo colliery was a hard coal mine in Gelsenkirchen-Buer .

In the years 1870 to 1872, various mutation wells were found west of Buer. Under the leadership of the Essen merchant Hugo Honigmann, shareholders from Essen, Mülheim an der Ruhr and Buer founded the trade union of the Hugo coal mine on March 24, 1873 and approved under mining law on April 2, 1874.

1873 to the road to Horst with the sinking of the first shaft started. In 1875 this could go into operation. It was equipped with the first iron headframe of the Promnitz design in Germany. Due to technical difficulties in commissioning the shaft, the inflow of foreign capital soon became necessary. For this reason, the mining trade union Hugo was converted into a stock corporation in 1881 , in which the international mining group Harpener Bergbau AG held the majority of shares.

To the concentration of the promotion to the pits 1 and 2, these were removed with the time to double pits. There were brought down:

In 1906, shaft 2/5 was also given a coking plant . A coking plant blown on shaft 1/4 in 1914 had to be shut down again shortly afterwards. The mining operations were gradually modernized. Shaking chutes were increasingly used.

After the First World War , Harpen AG carried out several consolidation measures. In 1928 mining shaft 3 was taken out of service. It continued to be operated as a cable car and weather shaft system. In 1930 the Hugo 2/5 coking plant was also shut down.

From 1934 the expansion of the mine was started again due to the changed political framework. The processing plants shaft 2/5 were extensively renewed.

The eastern and northern pit field area was gradually opened up by cableway shafts.

In 1944 the mine suffered 2/5 severe bomb damage. The production had to be shifted to the shaft system 1/4. After the war damage had been repaired and shaft 2 was equipped with vessel extraction, extraction was moved back to Hugo 2/5 in 1947 . Mine 1/4 finally stopped production. At the same time, however, a new coking plant with 140 coke ovens was put into operation on 1/4 . In 1952 the Hugo colliery was spun off from Harpen AG in accordance with a resolution of the Allied Control Council and assigned to Essener Steinkohlenbergwerke AG .

From 1954 onwards, plant 2/5 was extensively expanded. The new buildings were designed by the architect Fritz Schupp . From 1957 to 1960 the new conveyor shaft 8 was sunk on 2/5, which took over the main conveyance with large-capacity wagons. A new processing facility was set up next to him. This ensemble was also designed by Schupp.

In 1967 the no longer required shaft 3 was filled . In 1968 the Hugo colliery became part of the newly founded Ruhrkohle AG . The power plant Hugo 2/5/8 was taken over by Steinkohlen Elektrizität AG ( STEAG ) .

In 1971, the colliery was able to take over many of the miners released from the former Graf Moltke colliery as part of the total adjustment plan for Ruhr coal . Further modernization measures were carried out. The container conveying capacity of the Hugo 2 shaft has been increased. In 1974 the shaft was given a new steel box structure with four-rope conveyance so that it could be conveyed in 30-tonne containers.

From 1973 onwards, efforts were made to reduce the coal stocks of the former Graf Bismarck colliery . For this purpose, the southern field had to be better developed in terms of weather. Therefore, from 1974 to 1979, the Hugo 9 shaft was sunk purely as a weather shaft. The Emschermulde 2 shaft, abbreviated EMU 2, served the same purpose on the site of the Bismarck II colliery .

In 1977 the 1/4 coking plant was finally shut down. The shafts 1/4 were equipped with smaller conveyor systems. The 1980 production amounted to 3.5 million t of fat , gas and gas flame coal with 5000 employees. In 1986, shaft 5 was equipped with a tower hoisting machine to serve as a central cable car and material shaft . On 1 January 1993 the bill Hugo was in accordance with the decisions of the coal round with the Consolidation colliery and North Star joined to the mine Hugo / Consolidation.

In June 1996 there was a mine fire at a depth of 1,170 meters. Conveyor belts, cable harnesses and explosion barriers caught fire. This released higher amounts of dioxin. Dozens of miners suffered skin infections, narrowed airways and other symptoms of poisoning. Then high dioxin values ​​were measured.

On April 1, 1997, the association with the Ewald / Schlägel & Eisen mine to form the Ewald-Hugo mine took place. Funding for the Hugo construction site was relocated to Ewald in Herten from January 1998. This mine was closed on April 30, 2000.

The remaining shafts were backfilled between 1997 and 2001 after plans for a visitor mine , which could have been operated via shafts 5 and 8, were finally abandoned in 2001 for cost reasons. This was followed by the almost complete demolition of the daytime facilities of all pits, including the extensive Schupp buildings on Hugo 2/5/8 and buildings from the Wilhelminian era , which ended with the blasting of the power plant on Hugo 2/5/8.

It is thanks to an initiative by former miners and non-miners Hugo that the headframe and hoist of the Hugo 2 shaft were not demolished. They were taken over by the city of Gelsenkirchen in 2005 and are set up as a museum. Klaus Herzmanatus , the last chairman of the works council of the Hugo mine, is the managing director and engine of the Hugo Schacht 2 eV sponsoring association. The action group for the preservation of the mine now has a strength of almost 50 people. The sponsoring association maintains the small museum together with the history circle Hugo / Schüngelberg , here you can experience mining and local history, as well as the connection between FC Schalke 04 and the miners. 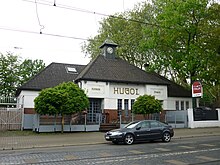 The Hugo 1/4 brand control has also been preserved, which today houses the catering trade. The old management and some officials' offices on Horster Strasse also bear witness to the mining past. In addition, you can of course always find decommissioned trolleys in front gardens and rope sheaves on Horster Strasse (corner of Horsterstrasse and Hugostrasse).

The outer shafts north, east, 9, EMU 2 were also filled - some of them are currently being used for mine gas.

On the site of the former 1/4 pit, mine gas is sucked in via manhole pipes and used to generate electricity. The mine gas recovery system consists of gas suction devices (rotary piston blower) and the recovery system consists of gas engines with coupled electricity generators. The components are housed in containers and the electricity is fed into the public grid. Mine gas extraction plants are also set up on the site of the ancillary facilities Hugo Ost and Hugo 9.

The gatekeeper's house on the Hugo-Bahn on Horster Strasse was preserved thanks to Alfred Konter. The former employee of the Hugo Railway, popularly known as Don Alfredo, refused to leave the building when the demolition excavator was rolling. In the end he was able to prevent the demolition, the house is now administered by the Regionalverband Ruhr, and Alfred Konter has exhibited memorabilia in the house. The route of the Hugo-Bahn has been converted into a cycle path and leads past the gatekeeper's house.

The Schüngelberg settlement is also included in the Route of Industrial Culture.

Map with all coordinates of the shafts: OSM