The title of this article is ambiguous. Further meanings are listed under barrel (disambiguation) . 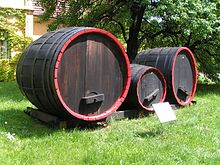 A barrel - also tonne (from latin Tunna ) in Bayern also Banzen (derived from the Italian pancia , which as much as Wampen means') and also particularly in Austria for larger barrels containers called - is a made of wood , metal or plastic produced , cylindrical ( cylindrical ), often bulbous container .

A barrel either has a small opening, the bunghole, for filling and emptying the liquid or is completely open on one side and can be provided with a lid. This second type of barrel is more used to store solid or powdery substances. 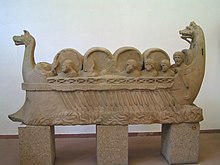 In ancient times, hoses made from animal hides or large clay vessels ( dolia ) were used instead of the common barrel . The famous Diogenes barrel was one such vessel called a pithos . Wooden containers carved from blocks of wood or logs were already around 1000 BC. In use.

Wooden barrels composed of staves are considered an invention of the Celts ( Gauls , Bojer ). The first mention of such barrels goes to various Roman sources from 50 BC. BC ( Aulus Hirtius , Caesar , Strabo , Pliny ). Barrels were certainly used in the Celtic area a few centuries earlier.

The first detailed description of the barrel is received from Pliny when he describes the wine barrels of the Celts as a vessel composed of staves, closed at the top and bottom by a bottom and held together by hoops . Barrel representations on the column of Trajan provide evidence of the barrels in the time after Christ.

Barrel sizes were often standardized. In the German-speaking world, the historical units of measurement ohm, piece and fuder were used for barrels .

Oak barrels in an underground storage room at Rutherford Hill Winery in Napa Valley AVA . The red color of some barrels comes from red wine that overflowed during the filling.

The cylindrical shape of a closed barrel allows, at least for smaller specimens, to be effortlessly moved (rolling) by hand to another location at a short distance. The bulged shape also makes it easier to change the direction of impact while moving. At the same time, a barrel can be stacked well and space-saving on the flat or rounded surface, depending on requirements and local conditions. In the second variant, the liquid can be easily removed from the tap at the front . The very large wooden barrels, which are unusual today, were also provided with an access opening in the bottom through which a person could climb inside and clean the barrel with a brush and water (which then ran out through the opening); Because of their size, children were often used for this work.

The transport of large filled wine barrels was very dangerous because of their great weight, especially pulling them up or down over steep cellar stairs. Before the development of wine pumps in the 19th century, however, this was part of everyday life and was carried out by specialized professionals, the Schrötern .

Depending on the intended use, a barrel must have certain properties. For example, a barrel must be absolutely leak-proof and, if necessary, breathable , i.e. allow oxygen or withstand high pressure . It may have to be resistant to certain chemicals (dangerous goods). In particular, wooden barrels are intended to impart a certain taste to the stored liquid . This is made easier by the dissolving properties of alcoholic beverages such as wine or beer . However, this release only takes place over a certain period of time, after which the relevant wood components are loosened and the barrel has to be replaced with a new one, with barrique aging this takes place after about two to three years.

The following barrels are distinguished according to application and type of withdrawal.

The steel drum or steelpan, a musical instrument , is handcrafted from the separated lower half of a steel barrel, the sub-floor . This is native to Trinidad and Tobago .

The largest wooden barrel in the world ( Dürkheimer Riesenfass ) is in Bad Dürkheim (Rhineland-Palatinate) and holds 1.7 million liters. It was never filled with wine, but it is home to a restaurant. From the start, this barrel was not intended for storing wine. A comparable giant barrel used as a restaurant ( Obří sud ) with a capacity of more than 1 million liters is located in the spa town of Lázně Libverda (formerly Bad Liebwerda) in the Liberec district in northern Bohemia.

The largest barrels intended for wine are in the Badisches Winzerkeller Breisach with 1.2 million liters. These are only used for blends. The large barrel of Heidelberg Castle (221,000 liters) was only filled three times because it was constantly leaking. The cuvée barrels in Freyburg (Unstrut) ( Rotkäppchen Sektkellerei , 120,000 liters) and in Mainz ( Kupferberg Sektkellerei , 100,000 liters) are the largest wooden barrels filled.

Under August the Strong , the third Königstein wine barrel with a capacity of 238,000 liters was produced in 1725 . The barrel stood on the Königstein Fortress in the Elbe Sandstone Mountains and emerged from a competition between Augustus the Strong and the Elector Palatinate , who also had giant barrels built at Heidelberg Castle. The Königstein wine barrel was only filled twice. At the time of the Napoleonic Wars it fell into disrepair and was dismantled.

The Fürstenfass in Pfedelbach was built in 1752 and is the attraction of the local wine museum. It has a clear diameter of 4 m. The circumference is 15.5 m, the total length 5.2 m. The barrel holds 220 buckets from Württemberg , that is 64,664 liters.

The phrase "to go on the barricades" refers to the use of barrique barrels to build a barricade in revolutionary France.

The phrase "to be out of control" alludes to a barrel whose staves or hoops (straps) have slipped and endanger its stability.