The title of this article is ambiguous. Further meanings are listed under Tyr (disambiguation) .

Týr represented intact here with both arms ( Iceland , 18th century), is often associated with the god of war Mars equated

Tyr ( reconstructed in ancient Germanic * Teiwaz, * Tiwaz ) is a god in the old Icelandic writings of the Edda , where he is named on the one hand as the god of struggle and victory, but on the other hand also appears as the guardian of the legal system. The Old Norse form of the name is the best known and most common. Other individual language forms in Old English are Tiw, Tig , Old Dutch dīs and Old High German Ziu, Tiu, Tiuz .

The root of his name suggests that Tyr was originally a father or sky god who was later ousted from this position and declared the son of either Odin or Hymir . In the Interpretatio Romana , from the perspective of the Teutons, probably because of the connection between war and law, he is equated with the Roman god of war Mars .

Original Germanic * Teiwaz, Tiwaz , Indo-European * deiwos , means "God" or "divine" and corresponds to the Latin divus . In Old Norse ( Völuspá ), the plural form tívar means "gods" and represents a relic of the basic meaning of teiwaz . The name and the figure are originally related to the Indo-European "father and sky god". The Germanic form is related to the Greek " Zeus " Ζεύς πατήρ ( Zeus patér ), the Roman Jupiter (from Diēspiter , heavenly father), the Vedic- ancient Indian Dyaúh pitá and the Illyrian Δει-πάτυρος ( Dei-pátyros ). All of these forms can be traced back to a word * dyews 'heaven' and 'day', which can be understood as "appearance" or "radiation". Derived from this is * deywo- > old Indian “ deva ”, Latin “deus” etc. This connection of names can still be found in Baltic mythology , where Dievs appears as the supreme god of heaven.

It is assumed that Tiwaz was the original main god until the time of the Migration Period in Germanic Central Europe . The French religious scholar Georges Dumézil (1898–1986) has a. a. also pointed to the structural parallels to the figure of Scaevola in the ancient Roman heroic saga. There is also a similarity to the Irish Nuada with the "silver hand". However, the similarity is limited to the loss of a hand or an arm under fundamentally different circumstances. Part of the research believes that archaic Germanic society understood itself in its structure to be of divine origin. One thesis sees the two-part tip Tiwaz / Tyr - Wodan / Odin , analogous to the Indian god figures Mitra - Varuna , as characteristic of the Indo-European system of gods.

Otto Höfler and Karl Helm assume that Tiwaz was ousted as the main god by Wodan . This shift in focus of the religious cult is due to the spread of the vodan cult from north-west Germany in the Lower Rhine region. However, this view is still an open issue in research today. Inner-Germanic changes, for example the unification and formation of large tribes such as the Saxons and Franks, may have contributed to this.

Tiwaz / Tyr is the sovereign of the law. With Odin, however, a dynamic, ecstatic figure would emerge who is endowed with the highest creative power and, among other things. a. works magically, by blinding the opponent and provides advantages over Tiwaz / Tyr in military combat. In contrast, Tiwaz / Tyr remains relatively statically the guardian of the law and protector of the thing assembly.

Tacitus mentioned in the Germania Mars besides Hercules and Mercury as Germanic gods, also in his annals that the main god of the Teutons Mars was “ praecipuus deorum Mars ”. Older research, based on Snorri Sturluson , mostly interpreted Mars as Tyr due to the naming of the days of the week, whereby Freyr can also be used due to Nordic and Indo-European parallels .

In the 6th century in Norway the Tiuz was sacrificed before all other gods (human and animal sacrifices) and he was worshiped as the highest god. The structural proximity and the connections between the two figures of God and the dynamic social upheavals within Germanic societies then led in the 9th and 10th centuries to a reorganization of the North Germanic pantheon , which is reflected in the high medieval written collections of the Edda, in which the original Image of the Tiwaz only partially, but still recognizable.

Minor forms of the name of God

The name is documented as Mars Thincsus on a stone altar that was found in " Temple 2" in Housesteads in County Northumberland in Northern England on the Scottish border. Several altars were erected there in the 3rd century AD by Frisian legionaries who were stationed as Roman auxiliary troops in Britain on Hadrian's Wall .

The name form is based on the common Germanic word " Thing " (people, court assembly) and the god is characterized as the "protector of things". The Germanic equation with the Roman god Mars shows that it is an epithet of the Tiwaz .

Tyr is not mentioned as Ziu in the Old High German sources, but a gloss on the so-called Wessobrunn prayer names Cyowari (probably: Admirer of Cyo ) for the Alemanni . Augsburg is given the name Ciesburc in the Notitia Galliarum , a list of cities from late antiquity . For both names, however, there is also the possibility that they are prescriptions for Raetiovari (residents of Rhaetia) or Ogesburc (Augsburg). Augsburg ( Augusta Vindelicorum ) was the capital of the Roman province of Raetia and has been a bishopric since late antiquity .

Furthermore, the name Ziu is included in the Alemannic word for Tuesday ( old high German ziostag ) ( see below ).

The Saxon baptismal vow , which is handed down in a Fulda manuscript from the end of the 8th century ( 772 ), presumably lists the names of the most important gods worshiped by the Saxons .

Donar and Wodan are common Germanic gods. Similarly, there is the possibility that either Tyr or Freyr will appear here as Saxnot . With this name he would only be found in the Saxon world of imagination. However , Saxnot is also associated with the "third nourishing fertility function " that would correspond to Freyr .

In the Anglo-Saxon genealogy , Saxneat is referred to as Woden's son. The mainland Saxons and the Saxons on the British Isles, who took over the vodan cult, subordinated Saxnot to Wodan, as Tyr is also called in the north as the son of Odin or Ares as the son of Zeus. Saxnot is literally Latin for "Gladii consors" ( fellow swordsman , sword-bearer), "Sax" is the short sword, the knife. The tribesmen called themselves "sword comrades", as in Anglo-Saxon "Sweordweras"; by placing the god of the sword in front of their community, they also made the god to be a fellow swordsman (for comparison mhd. wal-genôz → "comrade in battle " ). The deity here took the name of her people and not the other way around. "Saxnot" would then be the nickname of the Tiuz among the Saxons. However, the triad Woden-Thunaer-Saxnot and also the triad Mercury-Hercules-Mars in Tacitus could correspond to the North Germanic triad Odin-Thor-Freyr, especially since Freyr is also a sword god. The fact that the god was originally called Saxnot would not be conclusive in comparison to the current developments among the Germanic tribes of the migration period , but that the people in arms called themselves that is easy to understand. 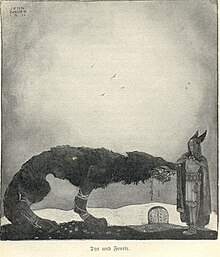 Tyr is severely limited and faded in power in the north, yet all the essential characteristics of the Tiwaz are revealed. According to the Eddic writings of the Song Edda , the giant Hymir is named as the father of Tyr, but in contrast to this, Odin is named as such in the Prose Edda . There is no record of Tyr's mother. He was considered the protector of the thing , the tribal assembly. His symbol is the sword with which he throws himself into the fray. In order to be able to bind the Fenriswolf (Fenrir) through the magical bondage of Gleipnir , Tyr feels compelled to hold the dangerous wolf's own hand in the mouth as a pledge. But when the wolf realizes that the gods want to keep him tied up, he bites off Tyr's hand, and Tyr has to fight with his left hand. In Ragnarök , Tyr kills Garm , the hellhound , but dies himself.

In the West Germanic area, in addition to Tiwaz , the minor form Mars Thingsus also has an influence on the German naming of the weekday name Tuesday (for older things roof). The Old High German translation of the Roman weekday name dies Marti (day of Mars ) was ziostag (Alemannic Ziestag , today's Alemannic Ziischtig , Swabian Zeischdig ) and thus confirms the equation of the Roman god of war Mars with the Germanic Tiwaz for the continent, which has been proven for the Scandinavians and Anglo-Saxons ( see also English tuesday (Tiu) and French mardi (Mars)). In addition, the Danish and Swedish Tirsdag is named after him.

Tyr as the namesake of the asteroid