This article covers the mythological term Ragnarök, for other meanings see Ragnarök (disambiguation) .

The Ragnarök ( Old Norse "fate of the gods"; from regin , gen. Pl. Ragna "god", rök "cause, meaning of the origin") is the legend of the history and fall of the gods ( end of the world ) in Norse mythology , like it the Völuspá prophesies.

The last section of the Ragnarök describes the new world that emerges after the fall of the old world.

Odin and Fenriswolf, Freyr and Surt (drawing by Emil Doepler , 1905)

Thor and the Midgard Serpent 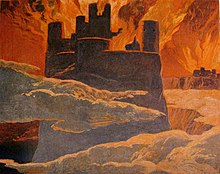 The new world of Ragnarok as in the Völuspá is described

Ragnarök is the name of the battle of gods and giants , in the course of which the whole world goes under. Three years of fierce fighting and then an equally long Fimbulwinter announce it.

The wolves Skalli and Hati (another tradition according to Managarm ) pursue the sun and the moon, respectively, in order to devour them. Stars should then fall from the sky. As a result, the earth begins to shake; all trees are uprooted, all mountains fall. The Fenriswolf can detach itself from its chain through these quakes , the Midgard serpent comes ashore, which is flooded.

The flood floods the death ship Naglfar made of fingernails and toenails of the dead. The Fenriswolf breathes fire, the Midgard serpent sprays its poison, which ignites the air and the sea. Muspel's sons come ridden through this tumult - above all Surt , the fire giant . You cross the Bifröst bridge , which then collapses. They move to the Wigrid Plain , where they meet the Fenris Wolf , the Midgard Serpent , Loki , Hrym (the helmsman of Naglfar), all of the Hrimthursen and Hel's entourage. There they adopt the order of battle.

Heimdall rises and thrusts his Gjallarhorn, a shout horn , with all his might and warns all gods who consult. Odin rides to Mimir's well for advice. The Aesir and all Einherjer , ie the dead from Valhalla who fell in battles, then arm themselves for battle. At the head, Odin rides with his spear Gungnir , his gold helmet and his beautiful armor.

In the following battle, Freyr fights Surt , where Freyr succumbs because in another myth he had given his sword to his servant Skirnir . The dog Garm , the guardian of the underworld, attacks Tyr . Both kill each other. Thor succeeds in defeating the Midgard Serpent. As soon as he has taken nine paces from the snake, he dies of its poison. Odin takes on the Fenris Wolf, who devours him. Odin's son Vidar avenges his father. He climbs into the mouth of the Fenris Wolf with his leather boot, tears its mouth in two and stabs him through the throat. Loki fights against Heimdall, they also kill each other. Finally, Surt hurls fire over the whole world, which destroys everything ( world fire ).

The sir gather. Flames and smoke will shoot up to the sky. By balancing order and chaos, a balance will arise that will help the reborn all-father Fimbultyr (Odin) to create a new world. The sir meet on the Idafelde . All evil gets better. The 65th stanza of the Hauksbók is:

Thor's sons Magni and Modi meet with Odin's sons Vidar and Vali in the former Asgard . Balder and Hödur return from Hel .

It is not entirely clear whether Nidhöggr , the human strangler who sucks the dead bodies, dies at the end of the Ragnarök. It can be interpreted that "he is bowing down" means his death; but also that evil will survive the end of the world and return.

At the end of the 19th and beginning of the 20th century, an influence of Christian eschatology was sought . In the meantime, the view has gained acceptance that ideas about the end of the world were at home in the entire Indo-European region and that Christian influence is rather unlikely. In particular, some researchers considered the 65th stanza of the Hauksbók quoted above to be an insertion that should point to Christ. Sigurður Nordal thought the stanza was original, but the content of the introduction was influenced by Christian ideas. Steinsland, on the other hand, has shown that this stanza does not fit into a Christian but rather into a pagan worldview.

Battle of the sinking gods by  Friedrich Wilhelm Heine

Richard Wagner treats the subject in his opera Götterdämmerung , the fourth part of the tetralogy The Ring of the Nibelung .

The third Thor film in the Marvel Cinematic Universe , Thor: Day of Decision (Original title: Thor: Ragnarok ), deals with the fall of Asgard, whereby the film does not strictly adhere to the historical template. Among other things, Hela, the main antagonist in the film, is not a child of Loki, but of Odin himself.