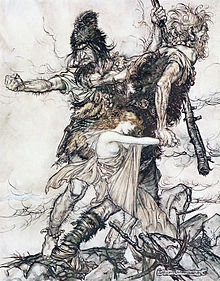 Jötunn (plural jötnar, an. Iötunn, ahd. Enz, aeng. Eoton, dä. Jætte, sv. Jätte) is the oldest family of gods in Norse mythology . They are the descendants of the ancient giant Ymir . The name is derived from the verb to eat ( ahd. Ezzan), with which the name could be translated as the voracious . The plural word is used for both female and male members of this people. For the majority, there is also the spelling Joten in German .

The Jötnar live in Jötunheim , which lies beyond the human-inhabited earth. The lord of this realm, which coincides with the realm of the dead, is Utgardloki .

They are sometimes friendly towards them and people (such as Aegir and Mimir ). Other jötnar are the Aesir and Vanir (and humans) hostile ( Thursen . See Rune Thurisaz). That's why Thor fights them all the time. This fight will continue until Ragnarok .

The Jötnar are often translated as “giants”, but there is no evidence that they are bigger than other gods. Only in the Utgardlokisage is he presented as a giant of enormous size, but it soon turns out that this was just a ruse. Selvårv Stigård therefore suggested that Jötnar be translated as “ Ettin ” instead of the word “giant” in order to clarify the difference in meaning.