The title of this article is ambiguous. Further meanings are listed under Freya (disambiguation) . 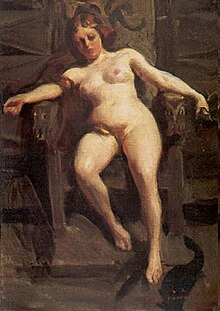 Freya , also Freia or Freyja ( Old Norse "mistress"), is the name of the Nordic Vanity Goddess of love and marriage. She is considered to be the second goddess of the Nordic pantheon after Frigg , with whom she is often equated or confused in modern reception. She resembles the Venus of the Roman heavenly heaven and the Aphrodite of the Greek Olympus .

Some descriptions are known from the Skald poetry, which are understood as Freya- Kenningar . These are Mardöll, Menglada, Hörn, Gefn , Sýr and Vanadís . Due to her nickname Gefn, she is (rather speculatively) associated with the goddess Gefjon . The South Germanic Frija (Old High German Friia, Frea) refers to the Aes goddess Frigg . 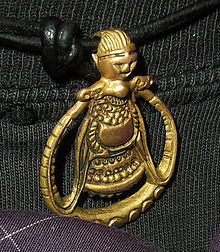 Freyja (copy of the Hagebyhöga find)

Freya belongs to the Wanen , one of the two gods of Norse mythology. Her brother is Frey (aisl. Freyr), her father is the sea god Njörd , her mother is called Skadi , daughter of the giant Thiazi . Her husband is the god Óðr in Eddic mythology . With him she had the daughters Hnoss and Gersimi (both names are synonyms and mean "preciousness"). Freya is considered the "most famous of the goddesses" ( Gylfaginning , chap. 23).

She is considered the goddess of fertility and spring, happiness and love, as well as the teacher of magic (seiðr).

Freya owns a collar forged by dwarves , brisingamen , a wagon pulled by forest cats and a falcon robe with which one can glide through the air like a falcon . According to the poem Hyndluljóð, she also rides the boar Hilisvini. Freya also appears in Gylfaginning . Afterwards she cries golden tears as Oðr continues. After the Grímnismál, their farm is called Fólkvangr . Your hall is called Sessrúmnir . According to the Ynglinga saga Snorris, she taught the sir the magic. But her main task is that she is at home on the battlefields as the leader of the Valkyries and can claim half of the fallen warriors, while Odin (the supreme god, god of war) is entitled to the other half.

The weekday Friday ( ahd. Frîatac, ae. Frīgedeag) is not, strictly speaking, derived from the North Germanic “Freya”, but from “Frija”, the South Germanic form of the name of the Germanic goddess Frigg , which, depending on the reading of the (sparse!) Sources, comes from that is to be distinguished. However, in Old Norse there were both the terms Freyjudagr and Frjádagr as a name for Friday, once referring to Freya and the other time to Frigg. (Compare Friday)

Freya plays an important role in the Eddic texts Hyndluljóð , Lokasenna and Þrymskviða . In Grímnismál she appears as the goddess of death and in Völuspá she shimmers through the singing Od's Bride (Óðs mey). The sorceresses Gullveig and Heid, who spark the war between Asen and Wanen in the previous stanzas, are also taken to be hypostases of the goddess Freya. According to Snorris Gylfagynning , whenever she attends a fight, she receives half of the dead, the other half falls to Odin .

Since it (eg. As German or English) no südgermanischen traditions to Freya's and Südgermanen (Friday) joined the day of Venus nor Frija / Frigg, it is believed that Freya a Viking Age detachment of the aspects of love, love magic and promiscuity of Frigg educates. The following episodes are described in the Edda and Gylfaginning : The necklace of Freya, the Brisingenschmuck, was made by the dwarves Alfrigg, Dvalin, Berling and Grervier (Gerr), the price of the acquisition was that the goddess had four consecutive nights with one each the dwarf spent - to the displeasure of Odin, who forced Freya as a punishment to start a war among the people. Another report said that Loki insulted all those present at the drinking bout organized by Aegir and accused Freya of having had affairs with all the sir and albums in the hall. It should be added that Loki languished in unrequited love for Freya. Freya's literary developments during the Icelandic renaissance of the 13th and 14th centuries are not, however, authentic sources of the pagan figure of the goddess. In modern times she has completely supplanted the goddess Frigg in the Icelandic processing of the old sagas. In an illumination in a paper manuscript from the 17th century, however, she only appears as a loyal family mother.

Well-known sources about Freya are two poems from the Song Edda . In the Lokasenna (“Diatribe of Loki”) the god Loki accuses her of having had intercourse with every god and every mythological figure. In the Þrymskviða ("The Song of Thrym") she has an outburst when the giant Thrymr (aisl. Þrymr) demands to marry him in order to trigger the hammer of Thor from the giants, which is important for the continued existence of the world of gods is. Freya also appears in Gylfaginning and Grímnismál.

Danish and Swedish place names go back to the goddess. So is z. B. Fröjel on Gotland, a Viking Age port and cult place of the Freya (Swedish. Fröja), where a Fornborg and a Trojaburg (north Trojeborg) refer to the old function of the place, which was also Thingplatz . In Denmark in Jutland Frøslev on Zealand also Frøslev and Lolland Frejlev such places.