This article is about the Norse god Loki. For other meanings of Loki, see Loki (disambiguation) .

Image sequence of the shackled Loki from the cross of Gosforth

Loki (also Old Norse Loptr , Hveðrungr ) is a figure from the Eddic poetry of Snorri Sturluson . The literary sources for the figure of Loki are, in addition to the Prose Edda and the Song Edda , including the Lokasenna (“Loki's quarreling”), and the works of the Skaldendichtung . Loki is one of the Aesi gods , although he is the son of a Jötunn , a giant. Furthermore, he is the blood brother of Odin . He is the most versatile of all gods, but also the one with the most negative qualities. There was no Loki cult and place names that refer to Loki are not known in Scandinavia.

Etymology of the name Loki

The meaning of his name is uncertain and is probably a short form of Loptr , which means "the airy" or "air god" in Old Norse. However, this term should be understood more in the sense of "Luftikus". Maybe that's also the old north. lúka , which means “to close”, which indicates his role in Ragnarök . Loki is not identical to the fire giant Logi .

In the Snorra Edda, Loki is the handsome and deceitful son of the giant Fárbauti and Laufey , who is also called Nal. His brothers are Byleist and Helblindi . His wife is Sigyn , his sons are Narfi (also Nari) and Vali . With the giantess Angrboda, Loki begat the death goddess Hel , the Fenriswolf and the Midgard serpent . In the shape of a mare he gave birth to the stallion Svadilfari the eight-legged horse Sleipnir , which he gave to Odin.

Loki is one of the most complex characters in the Nordic pantheon: on the one hand he helps the gods, on the other hand he plays tricks on them and betrays them. He makes use of his ability as a shapeshifter and appears, for example, in the shape of a salmon or a fly. Because of this ambivalent role, he is often interpreted as a trickster figure. There are many stories in the Edda in which Loki plays a role:

Loki's punishment is told in Lokasenna, a small mythological story from Gylfaginning (Edda).

Loki's relationship with the gods in Asgard finally falls apart after he deliberately caused Balder's death . First he escapes up a mountain. During the day it transforms into a salmon that is in Franangerfors, a waterfall. The sir manage to drive Loki into a corner with the help of a net he invented until Thor can catch him. They take Loki and his sons Narfi and Vali to a cave. There the gods transform Vali into a wolf who tears up his brother Narfi. Loki is tied to three rocks with Narfi's bowels. The goddess Skadi attaches a poisonous snake over Loki, from whose jaw poison is constantly dripping on him, from which his wife Sigyn can only temporarily protect him with a bowl that she holds over him. Every time she has to empty the bowl, the poison drips onto the helpless Loki, who rears up in pain so that the earth shakes (explanation for earthquake). With the beginning of Ragnarök , Loki can free himself from his bonds and fights in association with the giants against the gods. Loki dies in a duel with Heimdall , a guardian god.

Spread in the Viking Age

The god was generally not very popular; one did not name one's children after him. Viking Age depictions are accordingly rare. One was found as a pendant in the Gnesdowo hoard in Russia , another on the Snaptunstein . It is not certain whether the figure on the Gosforth Cross in Cumbria, formerly Northumberland (Great Britain), from the 9th or 10th century really represents Sigyn and the shackled Loki.

In Richard Wagner's Ring des Nibelungen the figure of Loki appears as a box . This goes back to a confusion of Wagner with the giant Logi (German "Lohe, Flamme"), who was Loki's enemy. This is reported in the tale of Thor and Utgardaloki. 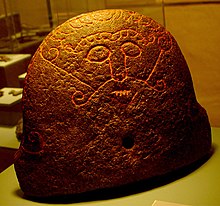 The shackled Loki and his wife Sigyn. Detail of an Anglo-Saxon stone cross from the 9th / 10th centuries. Century, Gosforth ( Cumbria ).