Anders Zorn was born as Anders Leonardsson in Yvraden near Mora in 1860. His father, Johann Leonhard Zorn, was a German brewer from Reichenberg , his mother, Grudd Anna Andersdotter, worked as a seasonal worker in Uppsala . Zorn's parents met in a brewery in Uppsala, where they both worked at the time. The relationship was short, there was never any question of marriage, and Zorn never met his father (who died in Helsinki in 1872). Even so, he later decided to take his last name.

Since his mother had no time for her son because of her work in Uppsala, Zorn first grew up on his grandparents' farm in Yvraden. He soon moved to Enköping to start his school education there. His teacher noticed early on the extraordinary artistic talent of young Zorn. He drew pencil sketches of his classmates, pictures of Enköping, and made some remarkable woodcuts of people and horses, many of which are now on display in the Zorn Museum in Mora.

In 1875, at the age of 15, Zorn began studying art at the Royal Academy of Arts in Stockholm, which, coming from a poor family, he could only afford through his father's small inheritance and the support of the German brewery company in Stockholm.

After Zorn had initially dealt with woodworking, he soon concentrated on painting with watercolors - possibly influenced by a visit to a memorial exhibition for the recently deceased Egron Sellif Lundgren . At a student exhibition in 1880 he presented his first important watercolor , “In Trauer” ( I care ), which earned him high recognition in the art scene. He quickly made a name for himself as a good portrait draftsman and in the following years received many commissions from wealthy Swedish families. On one of these assignments he met Emma Lamm, the daughter of a wealthy Jewish family. The two became engaged in June 1881. Emma Lamm's family liked the young man, but the young artist's financial situation did not allow him to support a family; marriage was therefore out of the question at this point in time.

To continue his studies and to earn enough money to support a family, Zorn left his home in Sweden. During the four years that he spent mainly in England and Spain , he was able to improve his style significantly. He spent a lot of time studying the movement and reflections of water's surfaces. With this new knowledge he later created works such as "Summer Pleasure" ( Sommarnöje ). His work “Liebes-Nymphe” ( Kärleksnymf ) was also created in Madrid in 1883 , which finally secured his reputation as a renowned artist. The pictorial representation of naked women also influenced the painter Brynolf Wennerberg . He received commissions from various members of the Portuguese and Spanish nobility , from which he benefited not only artistically but also financially.

After returning to Sweden, Zorn married Emma Lamm in the autumn of 1885. On their honeymoon to Hungary and Turkey ill anger Konstantin Opel difficult at a typhoid fever. It wasn't until three months later that he had recovered enough for the couple to continue their journey.

From Sweden, Zorn made many other trips to Spain, North Africa and England. In 1888 he presented at the Paris Salon his work "Fischer in St. Ives" ( Fiskare i Saint Ives ) and the portraits of ballet dancer Rosita Mauri and journalists Antonin Proust , which earned him considerable success. 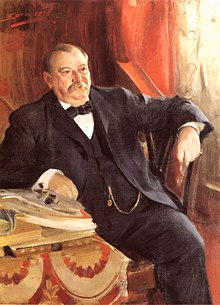 From the 1890s onwards, Zorn tried to convince the German art market of his works. In 1890 he received an order from the director of the Hamburger Kunsthalle , Alfred Lichtwark , to produce a watercolor with a port motif, which Lichtwark wanted to include in his “Collection of Pictures from Hamburg”. This picture was completed in 1891, but only exhibited in the Hamburger Kunsthalle from 1901. It was Zorn's etchings that were shown in two exhibitions in Hamburg as early as 1892 and that helped him achieve his breakthrough in Germany. The Port of Hamburg was Lichtwark's only commission for a painting, but by the time he died, Lichtwark bought a total of 42 etchings by Zorn, which later became the property of the Kunsthalle Hamburg. Further exhibitions followed, especially in Berlin, Dresden and Munich, so that Zorn became known in Germany in this way. In 1893 Zorn began to produce works for large industrialists and politicians in the USA. During this time he created a well-known portrait of the 22nd and 24th President of the United States, Grover Cleveland , and the 27th President William Howard Taft . In 1896 he received a large gold medal at the International Art Exhibition in Berlin .

Zorn later returned to Sweden and mainly painted landscapes and nudes . He also dealt with sculpture again and created sculptures such as "Nymphe und Faun" ( Nymf Och Faun ) or a statue by Gustav Vasa .

Anders Zorn bequeathed his entire legacy (worth the equivalent of over 6 million US dollars) to the Swedish state with the condition that a museum should be set up to display not only his own works, but also his considerable collection of international art. The Zorn Museum, opened in 1939, is now in his hometown of Mora.

The life of Anders Zorn at the beginning of the 20th century was portrayed in the 1994 Swedish film Zorn with Gunnar Hellström , Linda Kozlowski and Liv Ullmann in the leading roles.