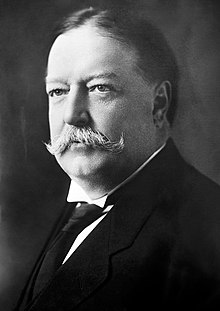 President Taft (front, with top hat ) on a visit to New Orleans

William Howard Taft was born on September 15, 1857 in Cincinnati to a distinguished Republican family. His father, Alphonso Taft , was part of the Grant Cabinet and was then envoy to Austria-Hungary and Russia under President Chester A. Arthur . The mother, a merchant's daughter from Boston , later advised her son not to seek presidency. He graduated from Yale University and the Cincinnati Law School . During his time at Yale, he was accepted into the local fraternity Skull & Bones . He served as a lawyer and court reporter for a short time before embarking on a lengthy career in various senior legal positions. He initially worked as an assistant attorney in Hamilton County and as a lawyer in Cincinnati until he was finally appointed judge at the Superior Court of the City of Cincinnati. From 1890 to 1892 he served as the United States Solicitor General ; subsequently he was a judge at the federal appeals court of the sixth judicial district, which has its seat in Cincinnati, until 1900 .

In 1886 he married the music teacher Helen Herron . The couple had three children. The daughter studied history, the two sons became politicians like their father. His eldest son Robert was an influential senator and an internal party opponent of the future President Dwight D. Eisenhower in the fight for the presidency in 1952 .

Taft's wife had been to the White House for the first time when she was seventeen , when Rutherford B. Hayes, a friend and lawyer of her father's, was in office. She was so impressed by the grandeur of the house and the aura of power that, as soon as she returned to her native Cincinnati, she announced that she would marry a future president and move into the White House herself.

In 1900 Taft was appointed chairman of the Taft Commission , and consequently in 1901 the first civil governor of the Philippines . In this capacity, he made moderate efforts to further pacify the still troubled island colony, promoted the school system and managed to sell the valuable monastery lands there to the USA for the sum of 7.2 million US dollars at the Vatican. He returned to the Philippines in 1907 to address the inaugural session of the Philippine Assembly .

In 1904 he was appointed Theodore Roosevelt to Secretary of War ; his father had already exercised this office under President Ulysses S. Grant . He soon became a close adviser and friend of the President, and he proved himself as a politician and diplomat in difficult situations in relation to Cuba and Japan . In 1904 he inspected the start of construction of the Panama Canal , was involved in the negotiations that led to the 1905 Treaty of Portsmouth between Russia and Japan, and in the same year negotiated a modus vivendi with the Japanese government ( Taft-Katsura Agreement ). In September 1906 the President appointed him provisional governor of Cuba for a month against the background of the American gunboat policy in order to avert an impending revolution against Tomás Estrada Palma .

After his remark that he did not want to run again in 1908, Theodore Roosevelt increasingly began to see Taft as an ideal successor and to build him up. At a dinner the Tafts were invited to, the President joked that he could see into the future and see something dangling over Taft's sturdy head. However, he is not sure whether it is a seat in the Supreme Court or even the presidency. "Let it be the Supreme Court !" Interjected Taft, while his wife Helen exclaimed: "Let it be the presidency!"

When the Republicans nominated him as a presidential candidate in 1908, he had not yet held an election. He, who as an administrative specialist did not belong to the inner circle of the Republican leadership, owed his appointment mainly to the then President Roosevelt. Taft won the election against the third unsuccessful candidate for Democrat William Jennings Bryan by more than 1.2 million votes. Taft's campaign hit was "Our Good and Honest Taft".

The great goal was achieved, but his wife was much more proud of it than her husband. After the trip to the White House together, Taft slumped into an armchair and, as two servants describe it, only groaned: "I'm president now and I'm tired of being pushed around." A high-circulation newspaper wrote: "Without his wife Mr. Taft never ran for president ”.

Henry Stimson considered Taft to be the best of the US presidents in the first half of the 20th century: During his tenure, responsibilities were clear, the cabinet meetings were well prepared, the execution of decisions was followed up and there was an effective exchange of information. Nevertheless, Taft did not succeed during his tenure in stepping out of the shadow of his predecessor Roosevelt, with whom he was also close friends. Taft's goal was to consolidate the reforms initiated by Roosevelt. He came more and more into conflict with the wings and interest groups within his party, the Republicans. Taft ran for re-election in 1912 , but only came third behind Woodrow Wilson and Roosevelt, who was running for the Progressive Party . Only in Vermont and Utah he was able to win a majority of votes and thus eight electoral votes. It was the worst result ever achieved by a president who stood for re-election. Woodrow Wilson replaced Taft as president on March 4, 1913.

Two states joined the United States during his presidency: New Mexico on January 6, 1912 and Arizona on February 14, 1912.

After his presidency, he withdrew into private life. Between 1913 and 1921 he was mainly a professor of administrative law at Yale University. In 1914 he was elected to the American Academy of Arts and Sciences . He also wrote several books on questions of state and politics in the USA, of which the book on the powers of the president, published in 1916, received special attention. 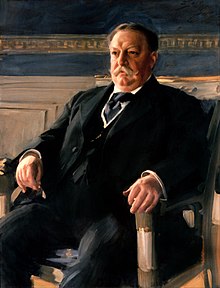 Official portrait of Taft in the White House

During the war years, he was President of the League to Enforce Peace, founded in 1915, which - with a conservative orientation - advocated the restructuring of international relations after the end of the war (International Court of Justice, sanctions, conferences). In 1918, President Wilson appointed him co-chair of the National War Labor Board, a labor dispute arbitration board established during the war. 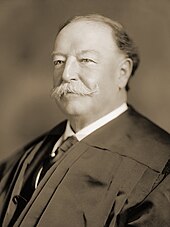 In 1921 he was nominated by Warren G. Harding , the first Republican president since Taft's defeat, for the post of Chief Justice , Chairman of the Supreme Court of the United States . In this a long dream of Taft came true. He held this office until February 3, 1930. Thus he is the first - and to this day only - American who was President and Chief Justice of the United States. Furthermore, by virtue of his office as Chief Justice , he was allowed to swear in two future presidents ( Calvin Coolidge (1925) and Herbert Hoover (1929)). When asked about his time as President and in the Supreme Court, he replied, "I don't remember ever being president."

Due to an illness - probably a heart condition - he resigned from this position on February 3, 1930. He finally died 33 days later on March 8th at his home in Washington, DC. Three days later he was buried as the first US President and Chief Justice in Arlington National Cemetery (the other President was John F. Kennedy , the other Chief Justice were Earl Warren , Warren E. Burger, and William H. Rehnquist ). His wife is reported to have said: "He served as Secretary of War [under Theodore Roosevelt ] and also as Commander in Chief [as President], this qualifies him to be buried here."

Taft was born on February 18, 1909 at Kilwinning Lodge No. Admitted to Cincinnati as a Freemason in 356 . His father and two brothers were also members of this lodge .

U.S. Governors and Governors General of the Philippines

Presiding judge at the Supreme Court of the United States