Joel Roberts Poinsett (born March 2, 1779 in Charleston , South Carolina , † December 12, 1851 in Stateburg , South Carolina) was an American doctor, botanist and politician . He was a member of the US House of Representatives , the first US diplomatic envoy to Mexico , US Secretary of War under Martin Van Buren and co-founder of the National Institute for the Promotion of Science and Useful Arts (a predecessor of theSmithsonian Institution ) as well as the namesake of Poinsett County and the poinsettie , a popular Christmas flower.

Joel Roberts Poinsett was born in Charleston, South Carolina, the son of Dr. Elisha Poinsett and his wife Ann Richards. He was educated in Connecticut and Europe, acquired law skills and studied medicine at Edinburgh University . From 1801 to 1809 he toured Europe and the Middle East with short breaks. In 1806 he was shown petroleum in Persia . From 1810 to 1814 he was President James Madison's Special Plenipotentiary for the South American countries to explore the perspectives of the revolutionaries in their struggle for independence from Spain . At times from Santiago de Chile , at times from Buenos Aires , he supported the Chilean and Argentine freedom struggle. In 1815 he returned to his home state of South Carolina.

He ran there for office and was from 1816 to 1820 a member of the House of Representatives from South Carolina , in addition, from 1818 to 1820 also President of the Board of Public Works of South Carolina .

From March 4, 1821 to March 7, 1825 he represented South Carolina in the lower house of Congress , first for the Democratic Republican Party , then after its split for various factions (18th Congress: Jackson Republicans, 19th Congress: Jacksonians); later he became a member of the Democrats . He was also special envoy to Mexico from 1822 to 1823. In 1825 he was elected to the American Academy of Arts and Sciences . Also in 1825 he was appointed the first official American diplomatic representative ( US Minister ) in Mexico and was embroiled in the country's domestic political conflicts until his recall in 1830. During this time he also traveled to southern Mexico and found in the area around Taxco del Alarcon the poinsettia , which later became known under the generic name poinsettia. The Aztecs spoke of this winter flowering plant as "cuetlaxochitl"; its Latin name is Euphorbia pulcherrima or the most beautiful Euphorbia .

Poinsett, an avid amateur botanist , sent samples of these plants to the States. Since 1836 this plant has been popularly known as "poinsettia". 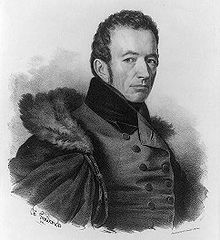 In 1830 Poinsett returned to South Carolina to support the unionists in the dispute over nullification and to hold a seat in the South Carolina Parliament from 1830 to 1831 . That preoccupied him until 1833 when he married Mary Izard Pringle.

Poinsett was from March 7, 1837 to March 5, 1841 as successor to Lewis Cass Minister of War in the Van Buren cabinet . With the extensive removal of Indians from the areas west of the Mississippi and beyond the Seminole Wars , he pursued a policy that counteracted the fragmentation of the army by combining associations at central points. With the authorization of the Army organization act issued in 1821 , he equipped artillery regiments with light batteries. He then retired to his plantation near Georgetown in 1841 .

In 1840 he co-founded the National Institute for the Promotion of Science and the Useful Arts . A group of politicians campaigned for James Smithson's estate to be used for a national museum that would show the relics of the country and its leaders, represent American technology, and document and preserve the national resources of North America . The group's efforts were unsuccessful, however, as other groups preferred to allow naturalists rather than political leaders to determine the fate of the institution that later became the Smithsonian Institution.

Poinsett died in Stateburg in 1851 and was buried in the Church of the Holy Cross Episcopal Cemetery . Cape Poinsett on the Budd coast of Wilkesland in Antarctica is named after him .

Joel Roberts Poinsett was an active Freemason , so he was also the lodge master of Solomon's Lodge No. 1 in Charleston, South Carolina .