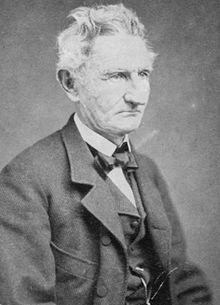 In the late 1830s, the Whigs' party gained significantly more influence at the federal level. In 1840, they even won the presidential election with William Henry Harrison . In South Carolina it was feared that the Whigs would favor the north and introduce new protective tariffs to the detriment of the south . For this reason they wanted to create a counterweight. Therefore, the contradictions within the Democratic Party that had been torn up in the nullification crisis in 1832 were reduced. Both factions agreed on a common political line. As a result, a candidate for governor was elected with John Richardson who had opposed the annulment of the federal laws in 1832. Senator John C. Calhoun was instrumental in this process .

Richardson's tenure began on December 10, 1840 and ended two years later on December 1, 1842. Richardson's biggest problem was the Bank of South Carolina . This rejected new laws to control the banking system, which had been passed as a result of the economic crisis of 1837 , categorically. The dispute over this issue has been brought to court repeatedly. In the last instance, the bank was defeated, but the conflict continued for some time. A new federal customs bill passed in 1842 also caused unrest in South Carolina, although the reactions cannot be compared to the nullification crisis ten years earlier. It is also noteworthy that it was during Governor Richardson's tenure that plans were drawn up to establish a military academy in South Carolina. The academy itself, dubbed The Citadel , opened in Charleston in December 1842, a few weeks after his tenure ended . This academy, which still exists today, is one of the most famous US military academies after West Point .

Even after his resignation from the governor's office, Richardson remained politically active. In the 1850s he took part in several conferences of the southern states at which a further course of action in the emerging conflict with the north was discussed. In December 1860, John Richardson was also a delegate at the Congress that decided South Carolina's exit from the Union ( secession ). He co-signed this Ordinance of Secession .