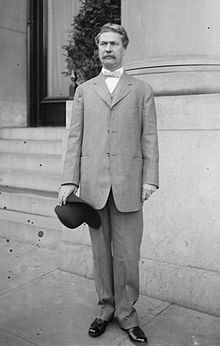 Coleman Blease attended Newberry College and the University of South Carolina . Eventually he studied law at Georgetown University in Washington . After his admission to the bar in 1889, he opened a law firm with his brother. Between 1890 and 1900 Blease was with one interruption in the House of Representatives from South Carolina , from 1904 to 1908 he was a member of the State Senate . He was also Mayor of Newberry in 1910. After several unsuccessful attempts, he was nominated in 1910 by the Democratic Party as their top candidate for the upcoming gubernatorial election. He won the subsequent election on November 8, 1910, in which he remained unopposed. Because the Republican Party was so weak in South Carolina during those years that it practically did not exist, political debates were fought within the Democratic Party, which was split into two opposing factions.

After Blease was confirmed again on November 5, 1910 without opposing candidates for two more years, he was able to serve as governor for a total of four years. The fact that he had no opponent in each case did not mean that he was undisputed. There was an opposition within the party, against which he had to prevail before the two elections. During his tenure, the Medical College in Charleston came under state administration. The governor took action against wastage in administration and promoted education. But there were also downsides to his government. His application of the right to pardon was particularly controversial. In his four years as governor, he had pardoned 1,500 to 2,000 prisoners, including those guilty of serious crimes. Apparently the governor wanted to give these "poor guys" a second chance. At the same time, he had vetoed many parliamentary bills.

On the racial issue, he was a racist who was convinced of the inferiority of the black compared to the white race . He was not only a supporter of racial segregation , but as a politician he was also involved in the so-called disfranchisement , the legal discrimination of the black population through laws. He also advocated lynching and thus the illegal terror against the black population. Finally, he came into conflict with the federal government over the issue of the National Guard's operational readiness. For this reason and also because of his increasing unpopularity, he resigned five days before the end of his term on January 14, 1915 from his office. Another reason for resigning so close to the end of his term in office was that for personal reasons, he did not want to be present at the inauguration of the elected successor Richard Irvine Manning . Another storm on August 28, 1911, when a hurricane destroyed the country's rice harvest, is noteworthy.

After leaving the office of governor, he remained politically active. Between 1925 and 1931 he was in the US Senate in Washington. There he put forward a legislative proposal that should tighten the illegality of mixed marriages, but failed. In the years 1922, 1934 and 1938 he failed each in the primary elections with an attempt to become governor of South Carolina again. Coleman Blease died in January 1942.

US Senators from South Carolina