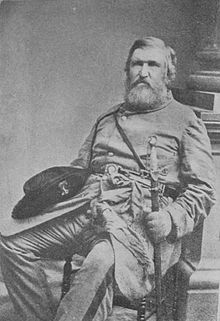 John Means attended Mount Zions College in Winnsboro and then until 1832 South Carolina College, later the University of South Carolina . After that he worked as a planter. He was a supporter of the radical forces in South Carolina, which advocated more state rights over the federal government.

Because of his political views, he was elected the new governor in 1850. During this period, the contrast between the northern and southern states of the United States overshadowed all other events across the United States. South Carolina was the spokesman for the South. Although the question of extending slavery to the new territories acquired by Mexico was resolved with the compromise of 1850 , new tensions arose during Means tenure. In 1851 a convention in South Carolina decided to leave the Union because the country felt that it was being patronized by the northern states and was also unwilling to compromise with the north on the hotly debated issue of slavery, let alone abolish this institution. A referendum in the same year, however, rejected this decision again. Accordingly, one only wanted to leave the Union if the other southern states would also join this step. At that time, however, the majority of the other states decided to remain in the Union. South Carolina then joined that majority. Governor Means was in favor of secession . He increased the National Guard's budget to prepare them for an eventual war with the north.

John Means term ended on December 1, 1852. Since the constitution did not allow two consecutive terms, he could not be directly re-elected. As a result, he remained true to his political principles. In December 1860 he was a member of a congress that decided the exit of South Carolina from the Union. Means co-signed the crucial document, the so-called "Ordinance of Secession". When the civil war broke out, he placed himself as a colonel at the head of an infantry regiment from South Carolina. This regiment was placed under Confederation command and fought in Virginia. Colonel Means was fatally wounded during the second battle at Bull Run . He was married to Sara Rebecca Stark and the couple had two children.