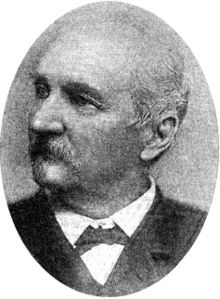 John Richardson came from a prominent political family in South Carolina. He was related to at least four other governors of that state, all of whom were named either Richardson or Manning. His father, John Peter Richardson senior , had been governor between 1840 and 1842. Young John graduated from South Carolina College, later the University of South Carolina , in 1849 . In the following years he worked on his plantation in Clarendon County and served intermittently in the state parliament of South Carolina in the 1850s . During the American Civil War he fought in the ranks of the Confederation.

After the war he was re-elected to the state parliament and then to the South Carolina Senate, where he remained until 1867. From 1878 to 1886 he was the Treasury Secretary of South Carolina. For the upcoming gubernatorial election in late 1886, he was preferred to incumbent governor John Calhoun Sheppard within his Democratic Party .

In the actual elections he was unrivaled. Both in 1886 and when he was re-elected two years later, the Republican Party waived an opposing candidate. During his four-year term of office, the prerequisites for the establishment of the "Clemenson Agricultural and Mechanical College" were created. It is also worth mentioning that in those years the Farmers Association gained great political influence in South Carolina.

After the end of his tenure, Richardson withdrew from politics. He died in 1899.