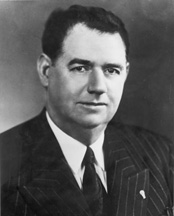 Johnston enrolled at the Textile Industrial Institute , now Spartanburg Methodist College , in 1913 and graduated a year later. He then attended Wofford College. After the American entry into the First World War , Johnston interrupted his studies and joined the army. After the war, Johnston returned to Wofford College and graduated there in 1921. He then studied law at the University of South Carolina . Between 1923 and 1924 and again from 1927 to 1930 Johnston was a member of the state parliament of South Carolina . As a young MP he was an advocate for the state textile mill workers. Its main achievement lay in the introduction of a law, which meant that the factory owners had to build a sewer network in the factory villages.

Johnston campaigned for the first time in 1930 for the governor of South Carolina. Already then he was leading the internal party candidate list in the area code. In the subsequent runoff election, however, he suffered a defeat. The lead of his competitor Ibra Charles Blackwood was about 1,000 votes. Four years later he was able to prevail within his party against the former governor Coleman Livingston Blease . He then won the elections on November 6, 1934 without any opponents. Right at the start of his tenure, a law was passed regulating the sale and trade of alcohol after Prohibition ended in South Carolina. A welfare program was also adopted. The governor advocated better education policies and banned child labor for children under sixteen. In October 1935 there was a conflict with his Highway Department. Originally it was about a dispute about the occupation of the offices in this authority. After the matter could not be settled to the governor's satisfaction, he mobilized the National Guard and had the ministry occupied, which he has since been accused of having irregularities. In the end, however, it was found that his allegations were unfounded. Johnston thereby lost his authority to appoint highway commissioners, a power that the governors' office has never regained. Johnston also proposed a number of bills to support state textile workers. A passionate New Dealer , Johnston pushed his legislative program through the House of Representatives to fail in the Senate. It became the most famous governor-legislature battle in South Carolina's history. During his tenure, the first state labor ministry and the first industry commission were also formed. Furthermore, an important large rural electrification project was started under his leadership.

Since the constitution of the time ruled out direct re-election of the governor, Johnston applied for a seat in the US Congress in 1938, albeit unsuccessfully. In 1942 he managed to return to the office of governor. This second term in office was marked by two special events. On the one hand, the governor had to support the federal government's war efforts, organize mobilizations and drafts into military service, and stimulate war production. The other issue was an attempt to circumvent an April 3, 1944, US Supreme Court judgment, Smith v. Allwright , who allowed African Americans in Texas to take part in primaries. In order to circumvent the transfer of this judgment to South Carolina, the state regulations on primaries were abolished and the parties were given private organizations. These in turn were not bound by the verdict and blacks were still excluded from participating in primary elections.

On January 3, 1945, he announced his resignation as governor of South Carolina to take up a mandate in the US Senate. He held this post until his death in 1965. For several years he was the chairman of the Post Office Committee, which no longer exists. Johnston was not as conservative as most of the other Southern Senators. He always maintained a populist stance on many economic issues. Unlike most Southern Democrats, Johnston opposed the anti-union Taft-Hartley Business Act of 1947. This was noticeable, for example, in his 1964 vote on two bills, the War on Poverty and Medicare , which happened in his last year in office. Johnston was against civil rights laws . He signed the 1956 Southern Manifesto , a letter of protest that was against racial integration and thus the equality of blacks. Meanwhile, Johnston was not a prominent figure nationwide, but was very well established in his home state. Despite the challenge from Strom Thurmond in 1950 and Fritz Hollings in 1962, he retained his seat in the democratic primary. In both cases, Johnston was the liberal candidate. Hollings, then governor, attacked the senator for being "the tool of the northern economic bosses".

US Senators from South Carolina