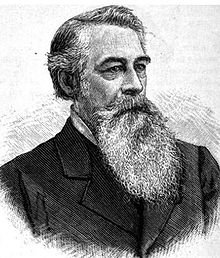 John Richardson was born on the Bloomhill Plantation in Sumter County . He first attended a school in Cokesbury and then studied until 1850 at South Carolina College , now the University of South Carolina in Columbia . After a subsequent law degree and his admission as a lawyer in 1852, he began to work in Sumter in his new profession.

During the Civil War served Richardson as an officer in the army of the Confederate States . After the war he began a political career as a member of the Democratic Party . Between 1865 and 1867 he was a member of the South Carolina House of Representatives . In 1876 he was a delegate to the Democratic National Convention , on which Samuel J. Tilden was nominated as a presidential candidate.

In 1878 he was elected to the US House of Representatives in Washington, DC in the first constituency of South Carolina . There he took over from Joseph Hayne Rainey on March 4, 1879 . After re-election in 1880, he was able to complete two consecutive terms in Congress until March 3, 1883 . After serving in the House of Representatives, Richardson was employed as a Master of Equity in Sumter County between 1884 and 1893 . He died on February 24, 1894 on his estate "Shadyside" near Sumter.