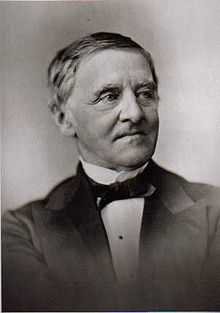 Samuel Jones Tilden (born February 4, 1814 in New Lebanon , New York , † August 4, 1886 in Greystone at Yonkers , New York) was an American lawyer and politician . From 1866 he was chairman of the State Committee of the New York Democratic Party , then from 1874 to 1876 Governor of New York . Extremely popular with the Democrats due to his reform policy and successful fight against corruption, he ran for the presidential election in 1876 .

Tilden achieved an absolute majority in the popular vote nationwide with a lead of about 250,000 votes, but was defeated by the Republican Rutherford B. Hayes in the electoral college by a single vote. The election was followed by fierce controversy as the counting of votes from Florida , Louisiana and South Carolina was not finally resolved, both parties claimed the results for themselves and accused each other of fraud. In Oregon , a voter should also not be recognized. It was only two days before the beginning of the following term of office that a specially established electoral commission finally passed the votes to Hayes as part of the unofficial compromise of 1877 .

His father was Elam Tilden, who died in 1842, and his mother was Polly Youngblood Jones. He had two brothers, Henry A. Tilden and Moses Y. Tilden. In 1834 he attended Yale University, but soon had to give up due to illness. He later studied at New York City University. He was admitted to the bar in 1841 and quickly rose to the fore in the bar. His specialty was corporate law. In the financially troubled years between 1850 and 1860, it is said that more than half of the railroads north of the Ohio River and between the Hudson and Missouri Rivers were at some point his clients. Here he made big money.

Despite his court duties, Tilden had an interest in New York politics, serving in the 1846 State Assembly and the 1867 Constituent Assembly.

In 1848, largely because of his personal ties to Martin Van Buren and John Bigelow , he took part in the revolt of the "Barnburner" (barn lighter) or Free Soil faction (Free Soil) of the Democrats in New York, and in In 1855 he was a candidate for the softshell, or anti-slavery faction, for the post of attorney general of the state.

The draft riots followed the draft riots and the violent riots that raged in New York from July 13-16, 1863, plunged the city into the worst chaos in its history. One of the reasons for this was the introduction of compulsory military service as a result of the American Civil War . On the other hand, a provision aroused particular resentment that made it possible to evade military service by paying $ 300. In the middle and lower classes, the American Civil War was seen as a war of the rich man and the fight of the poor man ("the rich man's war and the poor man's fight").

In 1866 Tilden was chairman of the New York Democratic Party in New York State . Tilden was criticized by Thomas Nast of "Harpers Weekly" for tolerating the corrupt activities of William Tweed, the city's political leader. Tilden was initially reluctant to join the campaign against Tweed, but in 1871 agreed to set up a committee to look into the matter. Until 1874 he was head of the Democrats and as such smashed the Tweed Ring , a corrupt organization that had formed around William Tweed , the "boss" of Tammany Hall in New York City and which was in the process of looting the city coffers. This eventually led to Tweed's arrest and conviction for corruption .

"New York [cannot] remain the center of commerce and capital for this continent, unless it has an independent bar and an honest judiciary."

"New York cannot remain the center of trade and capital for this continent unless it has an independent court and an honest judiciary."

Tilden was elected governor of New York in 1874, and two years later he was the Democratic candidate for the presidency.

He was nominated on June 28, 1876 in St. Louis in the first ballot as a candidate in the 1876 ​​presidential election. In the election he won a majority for the Democrats against the Republican candidate, Rutherford B. Hayes , but the results from four states - Florida, Louisiana and South Carolina, as well as a legal issue in Oregon - were unclear. By the time the votes were counted, Tilden (4,284,757) had won 51% of the vote for his party, against 48% of his Republican opponent Rutherford Hayes (4,033,950). The Congress continued to clarify the result is a a 15-member commission, which included one Republican over Democrat and zusprach every 20 angefochteten votes from the four states Hayes. Florida tipped the scales. This resulted in the unbelievable result of 185 votes to 184. In the so-called compromise of 1877 , Hayes had promised, among other things, to end the reconstruction of the South ( Reconstruction ) in order to allow his assumption of office to be tolerated by the Democrats.

The move to Yonkers

Tilden withdrew from politics and in 1879 bought the country house "Greystone" from John Waring, a hat manufacturer from Yonkers. The house was named after the gray granite that was quarried nearby and used to build the house. John Davis Hatch was the architect. Tilden converted the house for his own purposes and had a large complex of greenhouses built by the Lord and Burnham company.

Samuel Untermyer bought "Greystone" from the heirs at an auction in 1899. He employed 60 gardeners and grew flowers in 60 greenhouses on 150 acres overlooking the Hudson River. In 1948 the house was demolished and only the garden is accessible.

His legacy to New York

Tilden died on August 4, 1886 in Yonkers, New York, a wealthy man. He was buried in the Evergreen cemetery in New Lebanon, New York. His quote was carved into his tomb: I still trust people (“I Still Trust in The People”).

Since he was unmarried, he left the city of New York the sum of 5 million US dollars to establish a public library. With his two nephews challenged, the litigation dragged on for several years and the sum fell to $ 1 million. His books were merged with those of Johann Jacob Astor and James Lenox and formed the basis for today's New York Public Library in Bryant Parc .