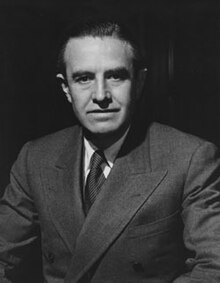 He was US Ambassador to the Soviet Union during World War II . He served under President Harry S. Truman as Secretary of Commerce, Marshall Plan Coordinator, and Director of the Mutual Security Agency (1951–53). Harriman was Governor of New York State from 1955 to 1958 . During the presidency of John F. Kennedy , he headed the Department of East Asia and the Pacific at the State Department, then he was 1963-65 Under Secretary of State for Political Affairs . Averell Harriman is counted among the six "wise men" who had a great influence on US foreign policy from the Second World War until the 1960s.

Harriman was the son of the railroad mogul EH Harriman and Mary Williamson Averell; his brother was E. Roland Harriman . Averell was first married to Kitty Lanier Lawrence, who died in 1936. He later remarried, Marie Norton Whitney, who had left her husband, Cornelius Vanderbilt Whitney , to marry Harriman. His third and final wedding was to Pamela Beryl Digby, the former wife of Winston Churchill's son Randolph, and Broadway producer Leland Hayward .

He was a successful student at Yale University , a member of the Fraternity Psi Upsilon and was called to the Skull & Bones Society with Prescott Bush . 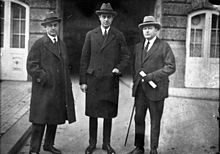 His father's fortune helped him found WA Harriman & Co investment bank in 1922. When his brother E. Roland Harriman joined the company in 1927, the name was changed to Harriman Brothers & Company . In 1931 she merged with the investment bank Brown Bros. & Co. to successfully organized as a partnership bank Brown Brothers Harriman & Co. to found. On behalf of Fritz Thyssen , he founded the Union Banking Corporation . This bank was closed in 1943 because it was also used to finance activities in the warring German Reich . Harriman's partners and collaborators in its activities were George Herbert Walker and Prescott Bush .

In the rail sector, he used the family-owned block of shares in the Union Pacific Railroad to actively shape business policy as Chairman of the board from 1932.

In of President Franklin D. Roosevelt as part of the New Deal launched Authority National Recovery Administration Harriman 1934-1935 worked as an administrator and Special Assistant . From 1937 to 1939 he was chairman of the Business Advisory Council , which advised the US Department of Commerce . In the Office of Production Management , a government agency created in January 1941 to centralize federal procurement programs ahead of the United States' entry into the war, Harriman was head of materials in the manufacturing department.

Ambassador to London and Moscow

Harriman (right) with Churchill and Stalin at the Moscow Conference , August 1942

Harriman worked under US President Franklin D. Roosevelt as a special envoy in Europe and attended the Arcadia conference between Winston Churchill and the president in Placentia Bay in August 1941. The result of that five-day meeting became known as the Atlantic Charter , a joint declaration of the principles of the United States and Britain. Roosevelt hired him to prepare the Lending and Lease Act , which provided for the delivery of military and supplies to Great Britain and the Soviet Union.

He was the successor to Admiral William H. Standley from 1943 to 1946 US Ambassador to Moscow. In 1944, in a letter to the State Department in Washington, he supported the Soviet version of the Katyn massacre , according to which the mass executions had been committed by the Wehrmacht . In January 1944 he had sent his daughter Kathleen with a delegation of journalists to a press conference of the Burdenko Commission , the Soviet investigation commission under Nikolai Burdenko , in Katyn . Kathleen Harriman's Katyn report came into circulation. In 1952, both of the Madden Commission , the investigative committee of the US Congress headed by the Democratic MP Ray J. Madden , who was supposed to clarify how the US authorities dealt with information about the mass murder, had naively fallen for Soviet propaganda to be.

Like Roosevelt, Harriman was originally fascinated by Stalin . According to the later KGB general Pawel Sudoplatow , Harriman, whose family owned shares in chemical plants, ironworks, and coal and zinc mines in Poland, proposed to the Kremlin to establish American-Soviet joint ventures. The Soviets alleged that Harriman had spoken out in favor of major concessions to Moscow at the Yalta conference out of fear of losing these possessions . On his departure from Moscow in January 1946, Stalin gave him and his daughter Kathleen two competition horses.

Harriman (2nd from left) with Secretary of State Dean Acheson , President Harry S. Truman and Secretary of Defense George C. Marshall in the Rose Garden of the White House (1951)

After his return to Washington, however, Harriman's attitude towards the Soviet Union changed: he became an advocate of containment policy . At the end of April 1946, the new US President Harry S. Truman sent him to Great Britain as ambassador. But after just a few months, in October of the same year, Truman appointed him Minister of Commerce , taking the place of Henry A. Wallace , who was critical of Truman's foreign affairs .

In April 1948, Harriman von Truman was given a new task: the coordination of the European Recovery Program , better known as the Marshall Plan . In 1950 Harriman was elected to the American Academy of Arts and Sciences . That same year the President appointed Harriman as his special assistant . In this position he traveled to Tehran in July 1951 to mediate in the conflict over the nationalization of the Anglo-Persian Oil Company by the Iranian government under Mohammad Mossadegh . Harriman was also a US representative and chaired a NATO commission to study Western defense plans.

Harriman is sworn in as director of the Mutual Security Agency , with President Truman and Chief Justice Fred M. Vinson

A separate agency was created in October 1951 to administer American support funds for Europe, the Mutual Security Agency (MSA), of which Harriman was director until it was dissolved in 1953. Harriman ran for the Democratic presidential nomination in 1952 and 1956, but was defeated both times by Adlai Stevenson , who in turn lost the elections to Republican Dwight D. Eisenhower .

In the race to succeed Republican Thomas E. Dewey on the governor's post of New York in 1954, he defeated Dewey-sponsored Irving Ives . He was governor from January 1, 1955 for a four-year term until the Republican Nelson Rockefeller defeated him in 1958.

He was named Ambassador at Large in the John F. Kennedy administration , a position he held until November 1961. He later became Assistant Secretary of State for Far East Relations in the State Department, which was then headed by Dean Rusk . At the International Conference to Solve the Laos Question in Geneva (1961–1962), Harriman was deputy representative of the USA. He headed the State Department's Asia-Pacific Division until April 1963, when he became Under Secretary of State for Political Affairs . As the US President's special envoy, he was responsible for the nuclear test ban agreement that was signed in Moscow in August 1963.

After the assassination of Kennedy, Harriman held the office of Under Secretary of State under the administration of President Lyndon B. Johnson until March 1965, when he was reappointed Ambassador at Large and held this office for the remainder of Johnson's tenure until 1969. In 1968, Harriman was also chairman of the President's Commission for the International Year of Human Rights. As the personal representative of President Johnson, he led peace talks with North Vietnam from 1968-69 . His stance on the Vietnam War is very controversial because he rejected the Paris peace negotiations .

Harriman received the Presidential Medal of Freedom in 1969 . At the Democratic National Committee (party headquarters of the Democrats) he was in 1976 the working group for foreign policy. He was also a member of the Council on Foreign Relations , the American Academy of Diplomacy Charter , the Club of Rome , the Knights of Pythias, and the Jupiter Island Club .

Secretary of State for Political Affairs at the US State Department