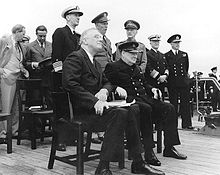 Roosevelt and Churchill aboard the Prince of Wales

The Atlantic Charter of August 14, 1941 is a joint declaration by the then heads of government of the USA , Franklin D. Roosevelt , and Great Britain , Winston S. Churchill , in the common principles of their international policy in the "hope for a better future for the world" were formulated.

Under the impression of the German invasion of the Soviet Union , Roosevelt and Churchill met from August 9 to 12, 1941 in the highest secrecy on the British battleship HMS Prince of Wales in Placentia Bay off Newfoundland . Here they agreed the Atlantic Charter, which was published on August 14, 1941.

In addition, increased US arms deliveries to Great Britain and the USSR were agreed at the conference, as well as an expansion of the American security zone for these deliveries to Iceland . Discussions that mainly revolved around the situation in the Republic of China and Spain did not lead to any strategic military decisions.

A total of eight points were recorded, including: renouncing territorial expansion, equal access to world trade and raw materials, renouncing the use of force, right of nations to self-determination, closest economic cooperation of all nations with the aim of creating better working conditions, economic equilibrium and the protection of workers , Security for the peoples from tyranny, freedom of the seas, disarming of nations to ensure a system of permanent security.

Two of the points relate directly to a world organization. The declaration was signed on September 24, 1941 by the Soviet Union and nine [ exile ] governments of occupied Europe, namely Belgium, Greece, Yugoslavia, Luxembourg, the Netherlands, Norway, Poland, Czechoslovakia and representatives of Free France . The Atlantic Charter thus became the fundamental document for the United Nations . It had the goal of a better world order in compliance with international law and, above all, the right of peoples to self-determination to establish a state . A certain style of the fourteen-point plan of Woodrow Wilson can not be denied.

Several points of the charter were disputed between Roosevelt and Churchill. Point three, for example, contradicted England's dominance in the Commonwealth , which did not provide for individual states to leave this group. Point four stood in the way of the British Commonwealth's trade isolation from the outside world. Churchill agreed to the charter with the caveat that Great Britain would not allow its application to the Commonwealth. The USSR later claimed, on a case-by-case basis, particularly in Poland and the Baltic States, to decide whether the Atlantic Charter should be applied to its area of ​​interest.

Point two of the Charter contradicted the ideas of the governments-in-exile of the countries occupied by Axis troops, which had their own drafts of the future borders of their states after the war. They made reservations. The Polish government saw its claims to Danzig , East Prussia and Upper Silesia in danger. Yugoslavia wanted to revise the Italian border with Slovenia in its favor and to preserve Trieste. Czechoslovakia was concerned with the Sudetenland.

The President of the United States and Prime Minister Churchill, representing His Majesty's Government in the United Kingdom, consider it their right to propose some general principles of their countries' policies, principles upon which their hope for a better future for the world is based establish.

Adopted by the Inter Allied Council on September 24, 1941

In its 2nd meeting at St. James's Palace in London on September 24, 1941, the Inter Allied Council adopted the general principles of the Atlantic Charter with the following resolution:

“The governments of Belgium, Czechoslovakia, Greece, Luxembourg, the Netherlands, Norway, Poland, the Soviet Union and Yugoslavia and representative of General de Gaulle, the 'Leader of the Free French', have taken note of the statement made by the President of the United States and Prime Minister Churchill for His Majesty's Government of the United Kingdom recently. You hereby declare your consent to the general political principles set out in that declaration and your intention to work to the best of your ability to achieve them. "