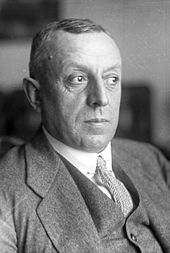 Fritz Thyssen (born November 9, 1873 in Styrum ; † February 8, 1951 in Martínez near Buenos Aires ) was a German industrialist from the Thyssen family . At first he was one of the sponsors and later one of the staunch opponents of the National Socialists.

Fritz Thyssen was born as the eldest son of the industrialist August Thyssen and his wife Hedwig Pelzer in Mülheim an der Ruhr . His parents separated in 1885 when Thyssen was twelve years old. He first attended the municipal high school (Oberrealschule) in Mülheim before he switched to a Catholic school in Düsseldorf .

Part of the group's inheritance since 1885, after a year of internship in his father’s company and three years of study in London , Liège and Berlin, he took on various positions in his father’s group from 1897, including on the mining board of the German Emperor’s colliery (1897), on the supervisory board of Saar- und Mosel-Bergwerks-Gesellschaft (1900) and Gelsenkirchener Bergwerks-AG (1907), whereby he was always in the shadow of his father until the death of his father (1926).

In 1923 he became famous overnight the German public because he is the spokesman of the German coal mine owner in the Ruhr fight against the orders of the French-Belgian occupation force involved through passive resistance. He was arrested, tried in a military court in Mainz and sentenced along with other industrialists from the Ruhr. When he returned to Duisburg , he was celebrated triumphantly by the public. Five years later he was awarded an honorary doctorate by the law faculty of the University of Freiburg .

After the death of his father in 1926, he brought major parts of the group to Vereinigte Stahlwerke AG , where he became chairman of the supervisory board. He held this position until his escape in September 1939. In 1926 he founded the International Crude Steel Community together with Emil Mayrisch .

Although he was still a member of the monarchist DNVP , he publicly supported Adolf Hitler and the National Socialists as early as 1930 - he had already supported the NSDAP with extensive donations since 1923. According to the diary of the American ambassador to Germany William Dodd , Thyssen stated in February 1936 that he had sacrificed a considerable part of his fortune for Hitler. In Thyssen's denazification process, it became known that from 1923 to 1932 he had donated a total of 650,000 Reichsmarks for all right-wing parties.

At that time Thyssen hoped for the re-establishment of the old class system and hoped that the National Socialists would push back the communist forces. In October 1931 he took part in the formation of the " Harzburger Front " against the Weimar Republic . On January 26, 1932, Adolf Hitler was able to give a speech in front of the Industrie-Club Düsseldorf and advertise his goals there. He belonged to the group of industrialists, bankers and farmers who, in November 1932, submitted the so-called industrial submission to Reich President Paul von Hindenburg , demanding that Hitler be appointed Reich Chancellor.

On May 1 1933 Thyssen joined the Nazi party a ( membership number 2917299). In July 1933 he was appointed a member of the Prussian State Council, which had recently been “redesigned” by Hermann Göring, “for life”, and in November he was a member of the Reichstag for the NSDAP . A little later, the Nazi Gauleiter of Essen, Düsseldorf, North Westphalia and South Westphalia recognized Thyssen voluntarily as the highest government authority on economic policy issues thanks to its membership in the State Council and Reichstag. Thyssen became a member of the Academy for German Law, received a seat and vote in the General Council of Economy and in the Expert Council for Population and Racial Policy at the Reich Ministry of the Interior. Thyssen was also a senator in the Kaiser Wilhelm Society , the forerunner of the Max Planck Society.

Break with the Nazi regime

In May 1933 Thyssen was instrumental in founding the Institute for Estates in Düsseldorf , and had obtained Hitler's approval for its establishment. Othmar Spann's corporate state ideology was to be disseminated and further developed by the institute. Although the majority of the institute belonged to NSDAP members, some saw participation in weekend courses and lectures as an alternative to full membership in the party. But from August 1933 Robert Ley founded two competing schools for economics and labor for his German Labor Front , which dealt with "basic explanations of the class structure" and fought against the Thyssens Institute. As the hostility increased, Thyssen wrote to Hitler in June 1934, complaining about the suspicions and allegations from party circles that he was "doctrinal, know-it-all, subversive, political-Catholic and not National Socialist". Instead of an answer, attending the courses was banned and employees of the institute were taken to prisons and concentration camps. Further differences of opinion arose between Thyssen and Hitler when Thyssen unsuccessfully campaigned for the release of the former Prussian welfare minister Heinrich Hirtsiefer , who had been deported to the concentration camp, and the deposed Mayor of Düsseldorf, Robert Lehr . In response to the dismissal of the Düsseldorf District President Carl Christian Friedrich Schmid , who was chased away because of his wife's Jewish origin, Thyssen wrote to Göring to resign his membership in the Prussian State Council under protest.

Thyssen criticized the Jewish pogroms and the looming war. On August 31, 1939, Thyssen was invited to attend a session of the Reichstag in Berlin . Thyssen telegraphed Göring from the Bad Gastein post office on the same day :

“I cannot follow this request because of my unsatisfactory health. In my opinion, some kind of truce should be possible to buy time to negotiate. I am against the war. As a result of a war, Germany will become dependent on Russia in the field of raw materials and thereby lose its position as a world power [.] "

On September 2, 1939 emigrated he and his wife, daughter and son-in-first into the Switzerland . From there he sent a letter to Göring on September 20, 1939, in which he demanded “that the German public be informed that I, as a member of the Reichstag, voted against the war. If other members of parliament voted in the same way, their vote should also be announced. ”The Nazi regime responded to this provocation by expropriating all of its property in Germany , including, in addition to its industrial assets, Puchhof Castle near Straubing in Lower Bavaria, which was acquired for his daughter Anita in 1937 , and later with expatriation .

In December 1939, Thyssen contacted Hitler directly. Among other things he wrote:

“Your new policy, Herr Hitler, is pushing Germany into the abyss and the German people into collapse. Turn the machine over while there is still time. [...] Give the Reich a free parliament, give the German people freedom of conscience, thought and speech. Provide the necessary guarantees for the restoration of law and order [.] "

Thyssen wanted to follow his daughter and son-in-law to Argentina and had already secured safe conduct through Italy when he traveled to Cannes in southern France to relax after visiting his dying mother in Brussels and his wife collapsing .

In 1940 he wrote the book I Paid Hitler (German: “I financed Hitler”) in southern France in collaboration with the journalist Emery Reves , an account of Hitler and his own role in Hitler's rise. Before the book was finished, France surrendered and the subsequent German occupation . Emery Reves published the book in London in November 1941 without Thyssen's approval. After the war, Thyssen distanced himself from the work that was now being used against him. He succeeded in ensuring that a German edition never appeared. Reves wrote in his foreword in 1941: “By the end of May [1940] we were almost finished. Over half of the book was finished, revised and approved for publication by Thyssen. ”Reves stated that he had not smoothed out or corrected the unfinished passages.

Contrary to Marshal Philippe Pétain's express assurance not to extradite Thyssen to Germany, he was arrested at the end of 1940 under pressure from the Gestapo and yet extradited to Germany.

The couple were imprisoned for over four years. After two and a half years in a psychiatric unit of a sanatorium in Neubabelsberg in Potsdam they came as "special prisoners" (below as "Honorable" designated conditions) in May 1943 to Sachsenhausen concentration camp , on 11 February 1945 to the Buchenwald concentration camp , on April 3 to jail Regensburg and finally to Dachau concentration camp . As members of the hostage transport, Amélie and Fritz Thyssen were deported to South Tyrol by prominent concentration camp inmates and clan prisoners , where they were freed from the hands of the SS guards by the Wehrmacht officer Wichard von Alvensleben shortly before the end of the war (see Liberation of the SS hostages in South Tyrol ).

After the war, Thyssen was interned by the Allies and released again in 1948. A tribunal in the denazification process classified him in 1948 as less polluted . Many points of the indictment had proven to be inconsistent, in particular the blanket accusation that Thyssen had financed Hitler and worked to smash the unions.

In December 1949 Thyssen moved to Buenos Aires ( Argentina ) to his daughter Anita, who had been married to the Hungarian Count Gábor Zichy (1910-1972) since 1936 . On February 8, 1951, he died there of a heart attack . His body was then transferred and buried at Landsberg Castle.

On July 7, 1959, Amélie Thyssen and her daughter Anita Countess Zichy-Thyssen established the Fritz Thyssen Foundation in memory of August and Fritz Thyssen.