Bad Gastein [ baːt ɡasˈtaɪ̯n ] is a spa and winter sports resort with 3944 inhabitants (as of January 1, 2020) in the Gastein Valley in Austria . The place belongs to the communities of the Hohe Tauern National Park and lies at the foot of the Graukogel. In addition to the spa treatments, the valley offers opportunities for relaxation and sport throughout the year.

Bad Gastein at the foot of the Hohe Tauern, view of the Radhausberg massif

A special feature is the location of the center, which was created on the steep slopes around the waterfall and is characterized by very steep and narrow streets. Multi-storey houses were built on these cliffs to save space, so that the appearance of the village is reminiscent of a city (“skyscraper village”). The difference in altitude between the spring park and the train station is around 80 meters. It is possible to overcome part of the height difference from the town center to the station area by using the car park lift (11 floors).

The place, spoken in Pongaurian Boud Goschdei , was called Wildbad or Wildbad Gastein in the past centuries . From 1906 to 1996 the community was called Badgastein . On January 1, 1997, the spelling was set to Bad Gastein . The name "Gastein" goes back to two Indo-European roots and means either "gray river" or "spraying river". The oldest existing document with the name "Gastuna" can be found in 963 in a certificate of the noble Rosmuot.

In the beginning, the bathing facilities were shared pools, in which bathers passed the time with breakfast and board games. For the successful bathing cures of the Middle Ages , long bathing times and also the generally long cure duration of six weeks were required. The Gastein healing cave is also supposed to offer natural help with rheumatic diseases as part of radon balneology .

In the Middle Ages, word of the healing power of the Gastein thermal baths spread. Despite the primitive bathing facilities and accommodations at the time, princes and nobles took long and arduous journeys to the thermal springs. The thermal water was conducted from the springs to the inns in open wooden gutters, later in wooden well pipes. The medicinal water was brought to the neighboring Bad Hofgastein by means of barrels and horse-drawn carts before a thermal water pipe was built in 1830.

On August 14, 1865, the Gastein Convention was passed between Austria and Prussia in Bad Gastein , which regulated the condominium over the duchies of Schleswig (administered in Prussia) and Holstein (administered in Austria) acquired as a result of the German-Danish War in 1864 .

The centers of gold mining in the Hohe Tauern are located in the Böckstein district . The most important gold supplier at all times was the Radhausberg . In 1557, 830 kg of gold and three times as much silver were brought into the Salzburg silver trade (purchase monopoly of the sovereign) from Gastein and Rauris. The mining of precious metals was nationalized in 1616. This operating period, now referred to as " Aryan ", lasted until 1865/1868.

After the state shutdown, private investors took over the mining industry and founded the first Radhausberg trade union , which lasted until 1904/1905. Then the Swiss tunnel builder Karl Imhof (1873–1944) became interested in mining, found a financier in the Swiss tobacco producer Fritz Mayer, and set up the Second Radhausberg Company . The economic success remained low. Production was inactive from 1926 to autumn 1937. After a brief engagement by the English Edron Trust, the German mining company Preussag started mining at the end of March 1938 ; Although this did not achieve any success, it was responsible for the creation of today's Gasteiner Heilstollen. Today, the Böcksteiner Montanmuseum and the Via aurea association remember this time.

The buildings marked in red, which make up a large part of the center, have been empty for years (as of 2010)

After the Second World War , a DP camp was set up from requisitioned hotels in Bad Gastein for Jewish, so-called displaced persons , most of whom had been moved from the DP camp on the grounds of the Ebensee concentration camp to Bad Gastein. The camp, in which up to 1,300 people lived at times, was closed in March 1946.

After the First and Second World Wars , Bad Gastein was no longer able to assert itself as a fashionable health resort for the upper classes. As compensation, winter sports tourism was established from 1946. Furthermore, rehabilitation clinics of health insurances and wellness hotels have increasingly settled due to the alleged healing effects of the radon-containing thermal water.

For many years, the tourist infrastructure of the place has increasingly shifted from the historical core to the station area. Due to the flat location, the location on the main road and the immediate vicinity of mountain railway stations (winter sports), it is more attractive and convenient for tourists to reach. The Felsentherme, also located there, which was facing bankruptcy due to ailing facilities, was extensively modernized by November 2017. Due to changed leisure habits (the summer season, which used to be dominant, was replaced by the winter season) and completely outdated buildings (many hotels had not been modernized since the 1970s and had insufficient heating facilities), the former Belle Époque hostels were increasingly decaying. The Grand Hotel Gasteinerhof , which only had three bathrooms, closed in 1987, and the owners of the renowned Grand Hotel de l'Europe , once one of the largest and most exclusive luxury hotels in Europe, had to file for bankruptcy in 1988. Since then, the multi-storey house has been used as an apartment building, with most of the owners only being there for a few weeks a year. The casino moved out in 2015. Between 2001 and 2005 the Viennese real estate entrepreneur Franz Duval acquired five historic buildings that characterize the center ( Haus Austria , Kongresshaus, Hotel Straubinger , Badeschloss , k. U. K. Post office) for a total of five million euros . Since then, the properties have fallen into disrepair, and son Philipp Duval, who inherited the property in 2013, did not present any redevelopment plans either. However, the Viennese architect Franz Wojnarowski announced in February 2017 that there were potential buyers who, like himself, were striving for "an architectural combination of old, classicist building tradition and modern new buildings". Wojnarowski held 50 percent of some of the old buildings on Straubingerplatz, Philipp Duval the other half. Duval was the sole owner of the House of Austria and the desolate congress center and, according to the municipality, had "broken off all contact".

Since investments in the tourist future of the town center were uncertain for years, there were attempts to temporarily use the "eyesore" artistically and to inspire guests for the "morbid charm" of the area. The Summer Fresh Art Festival has been held in July since 2010 and since 2011 artists have been invited to work in studios in the listed power plant at the foot of the waterfall and to live in hotels for a few weeks. In this context, the press referred to avant-garde performers, high-quality restaurants and described Bad Gastein as a “stronghold for the creative and the crazy”.

At the beginning of November 2017, the State of Salzburg bought the vacant historical ensemble on Straubingerplatz with the Hotel Straubinger, the Badeschloss and the post office building, which was in need of major renovation, for 6 million euros and financed an initial, makeshift renovation. In November 2018, the buildings were sold on to the Munich-based Hirmer real estate group for 7.5 million euros, subject to the condition that at least one 4-star superior or a 5-star hotel would be built no later than three years after the necessary permits had been obtained. A 520 meter long pedestrian tunnel and a new multi-storey car park should solve the traffic problems in the center by 2021. The number of overnight stays has risen significantly regardless of the inner-city ruins. In 2018 they were 1.2 million a year compared to 850,000 in 1990. In February 2019, there was even talk of a new “gold rush mood”.

The stylized silver jug ​​in the coat of arms is taken from the seal of Diepold von Gastein (1327).

The community council has a total of 21 members.

View of Preimskirche, hotel and spa facilities in the lower part of the town center (photo: 2020) 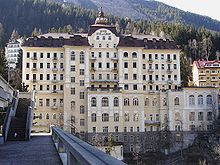 Bad Gastein offers a variety of natural historical and architectural sights. Outstanding are the waterfalls in the center and in Böckstein, the glacier mills, the hotel complexes of the Belle Époque . The architectural image of Bad Gastein was shaped primarily by the architects and builders Wolfgang Hagenauer , Josef Wessicken , Valentin Ceconi and Jacob Ceconi , Angelo Comini and Franz Franzmair .

The economic basis was and is the 17 thermal springs that are located on the “Badberg” (at the foot of the Graukogel) to the left of the waterfall, with temperatures ranging from 40 ° C to 46.4 ° C and a daily pouring of around five million liters .

The second economic basis since the development by the Tauernbahn and especially today is the pronounced tourism , in winter skiing in the alpine area and in summer mountaineering and hiking.