This article explains the community, the place there see Hüttau (community Hüttau) .

Hüttau is a municipality with 1460 inhabitants (as of January 1, 2020) in the district of St. Johann (Pongau) , Land Salzburg in Austria .

The community is located in the Fritztal in the Salzburg region. The valley forms the transition area between the Salzburg Salzachpongau (on the Salzach around Bischofshofen and St. Johann) and the Ennspongau (on the upper Enns around Altenmarkt and Radstadt), as well as the Lammertal , which is already part of the Tennengau (Hallein district) the valley watershed of St. Martin and the St. Martinsbach is connected.

The Hüttau municipality stretches both to the right in the valley northwards up the southern roof of the Tennengebirge (Northern Limestone Alps) and to the left (south) to the Hochgründeck  ( 1827  m above sea level ) of the Fritztal Mountains (Salzburg Slate Alps). Hüttau has no share in the high mountains, the municipality is located in the mid-mountain intermediate Alps that lie between the limestone and central Alps (main Alpine ridge of the Tauern).

The municipality includes the following four cadastral communities and five localities (population in brackets as of January 1, 2020):

The only counting area is Hüttau.

Archbishop Gebhard had already handed over the Fritztal to the Salzburg spin-off Admont Abbey in 1074 , and the place was first mentioned in documents in 1325 ( Admonter Stiftsurbar ). In the 16th to 19th centuries the place was characterized by mining and smelting works. The place name is interpreted as Au an der Hütte .

Hüttau, Iglsbach and Sonnhalb belonged to the Werfen court from ancient times , but Bairau and Sonnberg belonged to the Hofmark Wagrain and thus to the Radstadt court . In 1686 a separate pastoral care district of Hüttau was set up by Pfarrwerfen , at that time with 61 houses (28 from Pfarrwerfen, 33 from Altenmarkt). In 1786 41 houses belonging to Untere Fritz were added, and in 1787 30 more houses belonging to Pfarrwerfen. After the revolution of 1848/49 the local community was created, and in 1856 the parish of Hüttau was established.

The coat of arms of the municipality is described :

In a green shield , accompanied at the top right by a faceted red diamond and at the top left by a similar silver diamond , a red-roofed hut and in front of it a brick furnace from which flames beat. Everything in its natural colors .

The community council has a total of 13 members.

Hüttau is a two-season tourist destination with 50,000 overnight stays a year. The wood industry and the agricultural machinery trade are also important branches of business. 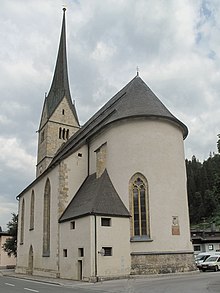 Structure of the municipality of Hüttau