Pfarrwerfen is a municipality with 2443 inhabitants (as of January 1, 2020) in the Salzburg region in the St. Johann im Pongau district in Austria .

View of the Salzach Valley to the north, the village of Pfarrwerfen and throwing with Hohenwerfen and the municipality at the Tennengebirge southeastern flank, behind the Pass Lueg 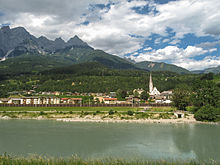 The community is located in the Salzachpongau , in the Salzach Valley on the right and up the southwest foot of the Tennengebirge .

The community consists of the cadastral communities of Dorfwerfen and Grub .

The municipal area comprises nine localities (population in brackets as of January 1, 2020)

The only counting area is parish throwing.

∗Golling only borders on one point, in the furnace channel at Hochtörl

From the 5th century BC The area was settled by Celts , around 200 BC. Part of the Kingdom of Noricum , which was established from 15 BC. Roman occupation and around 50 AD part of the Roman Empire . After its division, today's municipality becomes part of Noricum Ripense around the year 300. In the 5th century, Roman rule collapsed, and in 488 Odoacer ordered the withdrawal of the Roman population from Noricum. The systematic Christianization began in the 8th century (see History of Christianity in Austria ), the Archdiocese of Salzburg was founded by Rupert von Salzburg , and in 711 the monastery "Cella Maximiliana" was founded in Bischofshofen .

Pfarrwerfen was first mentioned in a document in 1074 in a donation letter by Archbishop Gebhard von Helfenstein ( parochia s. Cyriaci , Parish of St. Cyriak) and since 1398 belonged to the Prince Archbishopric of Salzburg .

With the Peace of Pressburg of 1805 Pfarrwerfen came with Salzburg to Austria. On April 9, 1809, Austria started a war against France. As a result of the Austrian defeat, Salzburg temporarily fell to Bavaria ( Peace of Schönbrunn , October 14th), after the Congress of Vienna in 1816, Salzburg came back to Austria through the Treaty of Munich (April 14th).

The community council has a total of 17 members. 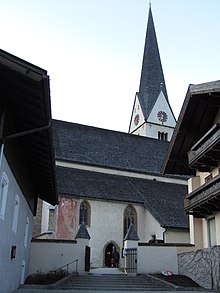