This article deals with the Austrian municipality, the place there see Werfen Markt , for other meanings see Werfen (disambiguation) .

The market town of Werfen with 3058 inhabitants (as of January 1, 2020) is located in Pongau , about 40 km south of Salzburg in Austria . The most famous sight is the largest ice cave in the world, the Eisriesenwelt . 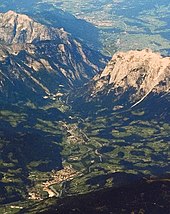 View into the Salzach Valley to the north, from Bischofshofen to Hallein. Market throw with fortress lower center

The rock formation of the Werfen layers is named after the place Werfen ( type locality ). This slate formation forms the basis of the limestone Alps , on which they have slid north and south from the main Alpine ridge. The Werfen layers build the entire southern roofing of the Tennengebirge and also the southeast of the Dachsteinstock up to the Fritztal and continue westward into the Blühnbachtal as well as south of the Hochkönig (Werfen-St.-Martin shed zone), the limestone of the Hochkönig forms a pronounced fault in the Layers that are open-minded in all their diversity around Werfen.

The Werfen layers are a rock zone that is sometimes extremely susceptible to the weather and leads to major structural problems, especially in the direction of Mühlbach.

The municipal area comprises five cadastral communities and six localities (population of the localities in brackets as of January 1, 2020):

Counting districts are Werfen , Tenneck , and Werfen-Umgebung for the rest of the municipality.

Take the market by the Hohenwerfen from

The Salzach Valley has long been one of the most important Alpine transit routes, and the Lueg Pass is its natural key point. The name Werfen (oldest documented evidence around 1140 Perhtoldus prefectus de Werven) is probably related to Middle High  German werve "Wirbel, Strudel". The word probably originally referred to the entire valley area: Around 1075 the parish of St. Cyriak was established here as the mother parish of Pongau (today Pfarrwerfen ) with the parish village ( Dorfwerfen ), the farming village ( village ) and the valley area Weng (today Werfenweng ) above, as well as the Castle ( Hohenwerfen ). The market town arose around this, Werfen is one of the oldest markets in the Salzburg region . It was granted market privileges as early as 1425. The secular administration was in (Hohen-) Werfen from the 12th century, while the ecclesiastical administration remained with the parish, so the place name has been distributed over several parishes.

Werfen was the seat of a Salzburg nursing court throughout the later Middle Ages and modern times (the district was only dissolved in 2002). During the Peasant Wars of 1525/26 Werfen was taken by the rebels without a fight.

Barbara Koller, a skinner in the Werfen area and thus a member of a socially ostracized group, was arrested in 1675 in a witch trial on suspicion of magic and confessed to being a witch using torture . She was executed in August 1675 at the execution site in Salzburg-Gneis. Her son Jakob Koller was popularly known as Schinderjackl .

In 1731/32 there was a large expulsion of Protestants: because they belonged to the Protestant faith, 20,000 people were expelled from the country by decree of the prince-bishop ( Salzburg exiles ). King Friedrich Wilhelm I of Prussia allocated new land to the refugees in East Prussia . After the ecclesiastical principality of Salzburg was dissolved , Werfen and most of the Salzburg region became part of Austria in 1816.

Economically, the place was strongly influenced in the 18th and 19th centuries by the Sulzau-Werfen ironworks (Blahau, then Konkordiahütte). In the 1870s, the Kaiserin-Elisabeth-Bahn (Salzburg-Tiroler-Bahn) was built on the other bank of the Salzach .

On July 25, 1928, after only a year of construction, the East Prussia Hut was inaugurated on the 1630  m high Rettenbachriedel in memory of the ancestors . The fortress was in 1931 partially destroyed by fire, then rebuilt and on August 6, 1938 NSDAP passed to under Karl Springenschmid to Gauschulungsburg to be converted. After the Second World War, the fortress was used as a training facility by the Austrian Federal Gendarmerie until 1987 .

The coat of arms of the municipality is described :

"In the divided shield above in gold the growing forward-facing figure of a pilgrim with a red dress, black cloak and a similar beret-like hat, holding a pilgrim's staff in his right hand, the left one propped up in the side, below in blue an upright black dog turned right ."

Werfen already had market privileges in 1425 and was listed with a coat of arms on the land boards of the Archbishopric. In the 19th century the pilgrim is still explicitly named as a saint Rochus , the dog is his saint's attribute (as such, usually bringing bread).

The Brennhof, the town hall of the municipality

Lengede in Lower Saxony has been Werfen's partner municipality since 1979.

On August 1, 2009, another run-of-river power plant from Salzburg AG was opened on the Salzach near Werfen, with a total annual generation of 76.5 million kWh. The construction took three years and cost around 63.5 million euros.

In the middle of the 20th century, famous films such as Agents Die Lonely or parts of The Sound of Music were filmed here. Lesser known films such as pediatrician Dr. Cheerful with Roy Black or Frankenstein's aunt were produced here.

On September 29, 2006 in Werfen the swearing-in of more than 500  soldiers of the Austrian Armed Forces took place. This was the ET 09-06 and, for the first time simultaneously, the inauguration of nine shooters from the Salzburg Rifle Guild .

The municipality of Werfen