Hüttschlag is a municipality with 909 inhabitants (as of January 1, 2020) in the Salzburger Land in the St. Johann im Pongau district in Austria . Hüttschlag has shares in the Hohe Tauern National Park and is a mountaineering village .

The community is located approx. 8 km south of Großarl in Großarltal im Pongau in the Salzburg region, around 70 km south of the city of Salzburg. The highest point in Hüttschlag is the Keeskogel ( 2884  m ). This is also the only glacier in Grossarltal.

The municipality includes the following three localities (population in brackets as of January 1, 2020), which are also cadastral municipalities :

The Grossarl Valley was first mentioned in a document around 930 AD. Around the year 1000 the Archdiocese of Salzburg became the landlord and, since the late 14th century, also the provincial ruler of Salzburg. In 1672 the valley became an independent regional court district. From 1805 to 1810 and since 1816 the place belonged to Austria.

According to tradition, Slavs from Carinthia and Lungau invaded the valley around this time. Several place names such as Klettn, Karteis, Schrambach, Tofern or Moritzen are of Slavic origin. The Bavarians, who later invaded, ousted the Slavs, and acts of war are said to have often taken place, especially in the Tappenkar and Bundschuh regions. After that the Bavarians got the upper hand.

The population of the Archdiocese of Salzburg, which at that time still belonged to Bavaria, grew steadily and the farmers were no longer able to feed the people. Archbishop Konrad therefore suggested clearing more land and making it usable.

Areas in the subalpine region have been used as alpine pastures since ancient times, the lower lying area was often still heavily forested. Soon, however, the first settlers made their way into the valley. Initially, they were looking for the best and, above all, the sunniest places to erect the so-called branches there and to protect their pets from bears and lynxes. One such branch was also branch huts.

On the left side of the gorge, the first climb into Grossarltal is said to have been built around 1330.

Hüttschlag has held shares in the Hohe Tauern National Park since 1991. The hiking offer attracts tourists to Hüttschlag. Alongside small and medium-sized businesses, tourism is developing into Hüttschlag's economic mainstay. Since 2008, Hüttschlag has been part of the PES initiative Bergsteigerdörfer , which has set itself the goal of promoting sustainable tourism .

Copper and sulfur mining is said to have been carried out in Hüttschlag as early as the 14th and 15th centuries. Traces of wooden wedges, scratching irons and pickaxes can still be seen in the oldest tunnels. The ore was initially melted in the Hütteggalm. Larger processing and melting plants were located in Wolfau. A natural disaster in 1517 buried and completely destroyed these facilities (Hubalmbach). The mining, however, promised to be more productive and so it was decided to build larger plants in today's local area of ​​Hüttschlag. The large copper smelter with five furnaces, eight sulfur furnaces and all the processing plants were built around 1520. In addition, many buildings were built around them, some of which are still preserved today in their original form. Mining brought an economic boom for Hüttschlag. It was often said in rural circles at the time that the miners had "tricky mouths".

In 1863, under the last mine administrator, Franz Guggenbichler, mining in Hüttschlag ended. Many miners emigrated with their families and looked for employment elsewhere. After mining ended, the valley became increasingly impoverished. The population sank from approx. 2000 to 470. The main occupation had to be switched to agriculture and forestry. The place owes its name to mining, it is derived from hut or smelter and fell, clearing.

With the mining, the Protestant faith came to Hüttschlag. Already in the 17th century it was brought to Grossarltal by foreign miners and spread very quickly. A total of 1,100 people had to leave the valley as a result of the evictions of Protestants . Most emigrated to East Prussia and Northern Germany. The cardholder at the time is said to have been the leader of the Protestants in the valley.

Mine functionaries who were able to read and write campaigned for the establishment of a school in this mining town. In 1755, lessons could be started in the sacristan's house for the first time. The first teacher was the sacristan Max Paumann at the time. Due to the increasing number of pupils in the initial Sunday classes, the sexton's room had to be rebuilt and expanded several times until a classroom was added in 1831 and 1905. The highest number of pupils in this old school, which taught for 205 years, was 165. In the years 1958 to 1960, a new elementary school was finally built. In the period from 1940 to 1972 there was also the Maurach School.

In silver, a red ring with a red cross at the bottom , pushed through by a blue hammer and a similar mallet on crossed black handles, are depicted on the coat of arms of Hüttschlag.

The image “ ♀ ” in the coat of arms stands for copper (mining- alchemical symbol). 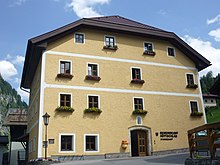 The community council has a total of 13 members.

Over the years, several small and medium-sized companies have settled in Hüttschlag. They became important employers for the residents.

Another mainstay is tourism. Three hotels and other landlords in each accommodation category have around 550 guest beds. Together with Grossarl, Hüttschlag is part of the Grossarltal holiday region.

Hiking and mountaineering are the main tourist attractions in Hüttschlag in summer. The Grossarltal has received the nickname "The Valley of the Alms" due to its highest density of managed alpine pastures in the state of Salzburg. The Grossarltal offers around 400 km of marked hiking trails in every difficulty level and around 40 managed alpine pastures. Other activities in Hüttschlag include mountain biking, climbing and fishing. There is also a playground, a sports field and a beach volleyball court.

View of the mountaineering village of Hüttschlag in Grossarltal. In the picture the Hotel & Aparthotel Almrösl, one of the restaurants in town.

A free ski bus takes guests to the Grossarltal-Dorfgastein ski area, which is located in the middle of Ski amadé. There are around 80 kilometers of slopes and numerous modern lifts. The following winter activities are also offered in Hüttschlag: cross-country skiing, winter hiking, tobogganing, ice stock sport, snowshoeing, ski tours or horse-drawn sleigh rides.

View of Hüttschlag from the rock face (1965)
See also:  List of listed objects in Hüttschlag

Along the A10 Tauern motorway to the Bischofshofen exit . Along the B311 to St. Johann im Pongau . Then along the Grossarl state road L109 to Grossarl and on to Hüttschlag. Regular buses run between St. Johann (train station) and Hüttschlag .