Rauris is a market town in the Salzburger Land in the Zell am See district in Austria with 3036 inhabitants (as of January 1, 2020). 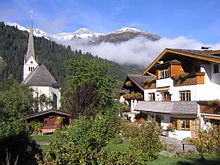 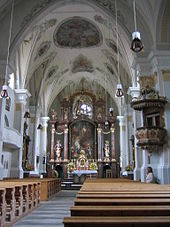 The municipality is located in the Pinzgau in the Salzburg region on the Rauriser Ache below the Sonnblick group in the heart of the Hohe Tauern National Park and extends over the Rauris Valley . Rauris is the largest municipality in Salzburg in terms of area.

The municipality includes the following six localities (population in brackets as of January 1, 2020):

The community consists of the cadastral communities Bucheben, Rauris, Seidlwinkl, Unterland, board area and Wörtherberg.

The Rauris Valley is one of the few permanently populated Tauern valleys. The fact that the paths over the Rauriser Tauern (Hochtor) were already taken very early is shown by various finds, such as that of a massive, gold-plated neck ring on the Maschlalm, which dates from the Latène period around 400 BC. BC. Six silver coins were found in the market, three of which depict the head of King Philip of Macedon , who lived between 360 and 336 BC. Ruled in the Balkans, show. Further finds are a small statue of Hercules from Roman times, important, even older finds are a bronze sword from the time 1300 BC. As well as a scarab from the time of Ramses II around 1200 BC. Chr.

The valley was settled from the south. It began with the construction of Schwaigen in the 12th century. Today's town of Rauris was previously named after the Gaisbach, on whose alluvial cone it was built, and is mentioned in a document as early as 1120. In 1122, when Bishop Heinrich von Freising handed over two farms to his brother Count Friedrich von Peilstein, the name Rurise appears for the first time and describes the entire valley.

The etymology of the name is unclear and, as in the case of neighboring Gastein , is certainly attributed to pre-Bavarian origins. For example, the common Indo-European root * ru / * reu for rivers appears possible, which here as in the neighboring valleys is also conveyed in Slavic or directly Romanic.

As early as 1230, Wörth is proven to be an important transshipment point for wagon and mule traffic across the Tauern to the south (Seidlwinkl) and into the mining area (Hüttwinkl).

The Seidlwinkltal formed the eastern access to the Heiligenbluter Tauern (Hochtor), which compared to all other Tauern crossings had the advantage of being open longer. This also led to the construction of the Rauriser Tauernhaus, which has been preserved to this day, which, like the other Tauernhouses in other valleys, had supply and supervision obligations for the traders and was already licensed in 1491.

The passport and barrier house in the Rauris was in Rauris . This passport was mainly used for food and disease control for the mines in Rauris, and it was also set up to prevent alcohol smuggling across the Tauern . The only Tauern crossing that was open in winter led through the Rauris Valley . It is therefore reasonable to assume that there was a fortification in addition to the pass station in Rauris. This is believed to be 1100  m above sea level on a protrusion of the Wörthberg near today's Burgstall farm .

As early as 1706, the hospital was very dilapidated. After the Protestants were expelled from 1731–1733 under Prince Archbishop Leopold Anton von Firmian , missionary work was promoted by the Franciscans in order to prevent Protestantism from regaining its strength in the country. In 1744 they tried from Hundsdorf to build a guard house in Rauris to prevent the "secret sneaking in" of Protestants from Heiligenblut in Carinthia , since the barrier in Rauris could not take over this function as it was easy to bypass. In addition, the masonry hospital was to be handed over to the bailiff and a prison was to be set up there. Although the military patrols incurred high costs for the landscape , the construction of the pass station was rejected.

In 1203 Chrysant von Einöd built a chapel in honor of St. Michael. In 1339 the new building of the church was requested and 15 years later it was completed. The restoration and the rebuilding of the church are once again mentioned in documents in 1411. Rauris has only had its own parish since 1858. The parish church of Rauris is the hll. Martin and Jakob consecrated.

The valley gained importance through gold mining, which can be documented as early as 1354. From 1377 to 1802 Rauris had its own regional and mountain court. Mining flourished in the 15th and 16th centuries. The trade houses with keel arched doors and bay windows still bear witness to the prosperity of this time. By 1500 the valley had more than 3,000 inhabitants.

From 1636 gold mining was operated by the archbishops from Salzburg.

In 1478 the term “market” appears for the first time for Rauris. In 1884, Emperor Franz Josef confirmed the market rights. In 1928 this was awarded again.

In the course of the eviction of Protestants in 1732, 166 Protestants had to leave the Rauris Valley.

After gold mining in the Gastein and Rauris valleys had almost completely come to a standstill at the beginning of this century, OBR Dipl.-Ing. Imhof, and after Austria's annexation to the German Empire, the Prussian Mining and Hütten AG ( Preussag ) to revive gold mining. However, he was reinstated in 1944.

In recent times, a possible resumption of gold mining has been discussed in detail in public, but rejected by the market town of Rauris and the communities of the Gastein Valley as dangerous to the environment and tourist traffic.

The coat of arms is a shield divided by red and gold diagonally to the left, where a goat is growing out of the dividing line and two crossed, black mining hammers are shown below.

The goat in the coat of arms alludes to the former name of the Rauris market, which used to be called “Gaisbach”, while the mining hammers recall the former gold mining in the valley and the importance of the place as the seat of trades. 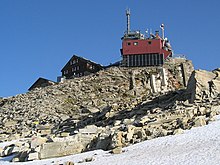 Rauris is a two-season tourist destination with over 420,000 overnight stays per year.

Furthermore, marble and quartzite are quarried in Rauris . The family-owned natural stone center in Rauris mines 50,000 tons of stone annually in two quarries.

Rauris is the seat of the Rauris Literature Days . In the summer of 2017, the film series St. Josef am Berg was shot in Rauris.

Cities and municipalities in the Zell am See district