This article deals with the community in Pinzgau; For the area of ​​the same name in the Saalforste see Saalforste .

Leogang is a municipality in the state of Salzburg in the Zell am See district in Austria with 3358 inhabitants (as of January 1, 2020).

The community takes up the entire Leogang valley . Leogang is located in Pinzgau between the Leogang Steinberge , the highest peak of which is the Birnhorn ( 2634  m above sea level ) in the north, and the Asitz in the south. There Leogang is located northwest of the Schultersbachhöhe (1520 m) on the Leoganger Ache . Leogang borders on Tyrol , the road to Hochfilzen leads over the Grießenpass at an altitude of 1000 m .

The municipal area includes the following 16 localities (population in brackets as of October 31, 2011), which are spread across the six cadastral communities of Ecking, Grießen, Leogang, Pirzbichl, Schwarzleo and Sonnberg. 13 of the 16 localities still have associated districts that bear topographical labels such as desert, hamlet, hunting lodge, Rotte, settlement, ski hut, guest house, hotel or alpine inn. Also pastures and huts are counted among the districts: 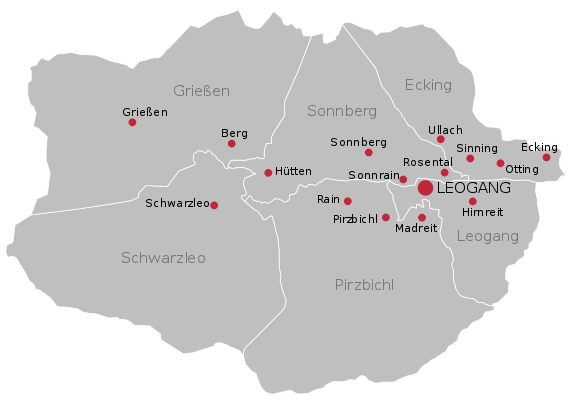 Locations in the cadastral communities

The following area information is available for the six cadastral communities:

The values ​​of the population density are very different in the individual cadastral communities.

Partial areas of the two southern cadastral communities Pirzbichl and Schwarzleo along the southern boundary of the municipality belong to the Bavarian Saalforsten , especially to the Leogang district. The four forest districts Wimbach and Saubach, Schwarzbach and Klamm, Maisbach and Finsterbach with a total area of ​​11.144 km² belong to the cadastral municipality of Pirzbichl, and thus take up more than half of its area. The eight forest districts Krinnbach, Walchersbach, Pründlkendl, Arzeck, Mardeck, Spielberg, Ochseneck and Käsersbach with a total area of ​​11.391 km² also belong to the cadastral community of Schwarzleo, to the west. Here, too, the forest areas in the hall take up more than half of the cadastral community.

Within 15 of the 16 localities (except the newer locality Sonnrain) there are a total of 147 historical farm names , such as B. Wimmgut for house number 31 in the village of Rosental, the forester's house in the Leogang district of the Saalforste.

Further building names, especially for the village of Hütten, can be found in a book from 1953.

As in all rural areas of Austria, house numbers are assigned within the localities after the houses have been built (therefore, apart from the information about the localities in the address, they are not a guide).

Leogang was first mentioned in documents as Liuganga in 930. Leogang is one of the oldest mining sites in the Salzburg region, and a miners' chapel testifies to the mining tradition. Today the place is called "Loigom" in dialect.

In Leogang there was a Protestant center. When Leopold von Firmian became Archbishop of Salzburg in 1727 and promoted the Counter Reformation, they secretly planned to resist. On August 5, 1731 the Protestants swore at the Schwarzacher Salt Licks to remain true to the Lutheran faith. On October 31, 1731, the Archbishop issued the emigration patent , as a result of which 4,000 to 5,000 servants and maids had to leave the country. In the following year, craftsmen and farmers left the Salzburg region. They moved to Protestant Prussia in 16 trains, with about 25% of the exiles dying during the exodus. The Protestant miners had largely left, as they were not subject to any master and did not have to ask for permission. As a result of the Protestant emigration, there was an economic decline in the Salzburg region, the mines fell into disrepair and 1776 farms were empty.

The coat of arms of the municipality is: “In a blue shield within a seven-link chain in Baroque style, open and broken at the upper edge of the shield, a silver lion. The iron chain that spans the church and tower above the windows and is provided with a padlock is intended to refer to the liberation of the oppressed and the economic boom of the community. "

Tourism is the most important economic factor in Leogang. A merger with the tourist association of the neighboring town of Saalfelden created the Saalfelden Leogang holiday region from 1999 onwards.

Butt bearer (18th century) in the mining and Gothic museum in Leogang
See also:  List of listed objects in Leogang

Cities and municipalities in the Zell am See district