Downhill , also downhill , is a variant of various sports, especially cycling (more precisely mountain biking ). It is important to master a downhill stretch in the shortest possible time.

In English usage, downhill is synonymous with downhill skiing as a discipline in alpine skiing .

Downhillers on a racetrack

In downhill (“DH” for short, “downhill” in English) - analogous to skiing - you have to ride a closed, exclusively downhill stretch with special bicycles as quickly as possible. In the roughest terrain, peppered with natural obstacles and at speeds of over 70 km / h, the sports equipment must be under full control at all times. The difficulty is to find the fine line between maximum speed and low risk of falling. Downhill is also practiced as a competitive sport. The UCI organizes races in the Downhill Individual (DHI) discipline at Mountain Bike World Cups and Mountain Bike World Championships . The 10-time world champion Nicolas Vouilloz is considered the most successful driver .

Technology of a downhill bike

High speeds and rough terrain place special demands on the technology of downhill bikes and limit their area of ​​use to downhill riding :

Theoretically, all types of gear shifts are possible on downhill mountain bikes , but some special features have become established.

With pure derailleur gears, single cranks are common; In this case, the switching options are limited to a maximum of 13 gears (as of 2020). Since 2014, special downhill cassettes with gear ratios similar to racing bikes and fewer gears (from 7) have been used, which are narrower and thus enable more stable wheels. Driving uphill is not intended with the reduced gear ratios. As derailleurs short cage rear derailleurs are used. These have a short cage in order to reduce the susceptibility to contact with foreign objects or the ground and the susceptibility of the chain to vibrations. Commercially available racing bike components are sometimes used here. By eliminating the derailleur of the multiple cranks, the chain jumps off the chainring more easily, so chain guides are necessary.

The cable car as a means of transport

Depending on the consistency in the implementation of the above-mentioned requirements, downhill bicycles have deficits in their suitability for climbing uphill. Alternatively, the ascent can be accomplished using motorized aids such as cars or cable cars. More and more mountain areas are equipping their railways with appropriate devices for bicycles.

The terrain offers a wide variety of requirements: bumps, loose stones, smooth roots that run diagonally to the direction of travel, high steps, long jumps, strong impacts, solid and loose ground. The faster the journey, the more actively the driver has to react to every obstacle with appropriate and sophisticated technology. 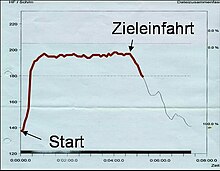 Heart rate during a downhill

A fast and safe journey requires very good physical fitness. Various forces are exerted on the driver by the sports equipment; many muscles are briefly stressed during cushioning:

In summary, quick, short reactions to external influences are required.

Without protective equipment, the driver would expose himself to unnecessary dangers in the field. Thanks to protectors , small falls usually go away lightly, as they protect against minor bruises and open wounds. However, even good protective equipment cannot always prevent fractures , torn ligaments and other serious injuries, so it should not be a reason to take a higher risk.

Complete protective equipment is usually mandatory during races. Likewise in most bike parks .

The dangers and disturbances

The Swiss accident insurance «Suva» classifies downhill as an “absolute risk”, in which insurance benefits can be reduced or even withdrawn entirely. Not only the competition but also the training is associated with high risks, because "it can be assumed that the limits will be explored and risks similar to those taken in the race".

Bikers counter this by saying that unlike road racing , where other road users are a frequent cause of accidents, the biker is responsible for his own actions. The downhiller is well armored and can even cope with rough falls without a scrape, but injuries are still not uncommon. Downhill bikes are forgiving of many riding mistakes that would have made you fall with a less specialized bike. It can become dangerous if inexperienced drivers overestimate themselves or if the unforeseen occurs: material failure, an unmarked wire over the path or hikers on closed routes. The greatest risk of injury, however, is falling on the neck, as this lies directly between the helmet and the back protector and is therefore unprotected. However, there are now neck braces that protect this area. Nevertheless, downhill experts like Marcus Klausmann also consider the sport to be a dangerous extreme sport.

Disruptive environmental impacts, especially at major events, can result from erosion and road damage. Due to the increased speed, downhill mountain bikes cause wild animals a stronger surprise effect than hikers, which can lead to exhausting escape behavior.

Downhill is also a discipline for skateboard or longboard . Competitions are held on closed mountain roads on special downhill or speed boards.

A longboard (often referred to as a speedboard when “downhill”) is a long skateboard without a kicktail. This is equipped with wide axles so that the ride is more stable at higher speeds. So-called speed wobbles occur with loose axes and lower speeds . These are vibrations from steerable wheels or axles that can also be observed on shopping carts, for example.

When skateboarding downhill, a fall (depending on riding style and speed) can have fatal consequences. Leather suit, helmet and protectors are worn accordingly. The leather suit protects against abrasions, the helmet against rough blows to the head and the protectors against bruises.

Experienced riders glide around a narrow curve at relatively high speed, shifting their center of gravity inwards and putting their weight on their hands. Gloves, so-called slide gloves, serve as protection. These are often made from a motorcycle glove and a plastic kitchen board.

Downhill skateboard on the road

Since there are no official downhill routes, you have to train on busy roads. This can lead to a fine ( Switzerland ), as the longboard is classified as "fäG" (vehicle-like device). However, in some regions there are extra facilities and roads that you can use for practicing. You only have to pay a small amount for this.

Since the sport comes from the United States and Canada , the terms of the technical jargon also have their roots there:

High-speed downhill on different surfaces and with standard or special bikes is to be considered an extreme sport, as it involves an enormous risk. Representatives of this variant were or are Eric Barone and Markus Stöckl . The current records are, for example, around 165 km / h (gravel / sand with series model) and 222 km / h (snow slope with special model).