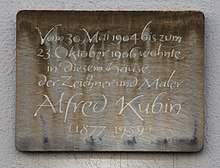 From 1887 Kubin attended a grammar school in Salzburg , from 1892 he was apprenticed to a photographer in Klagenfurt . From 1898 he lived in Munich , where he first attended Ludwig Schmid-Reutte's private painting school . On May 2, 1899, he enrolled at the Royal Academy for painting with Nikolaus Gysis . He soon dropped out of this course. After several study trips in 1905, he settled in 1906 near Wernstein am Inn at the old mansion of Schloss Zwickledt . He lived here until the end of his life: until 1948 with his wife Hedwig, after her death "in almost complete seclusion". He had met the wealthy widow, a sister of the writer Oscar AH Schmitz , in February 1904 in Karl Wolfskehl's house and married soon afterwards. It also made it possible to acquire the so-called "Schlössl". From 1907 to 1914 Kubin financed his stepson Otto Gründler 's visit to the reformed educational rural education home Freie Schulgemeinde in Wickersdorf near Saalfeld in the Thuringian Forest . Kubin wrote numerous letters, including correspondence with Karl Rössing and Hermann Hesse since 1928 , with Hans Fronius since 1931 and with Otto Coester since 1936 .

Kubin's fantastic novel The Other Side , which appeared in 1909 with numerous illustrations by Kubin, was also written in Zwickledt . In it, Kubin describes a world of dreams in the broadest sense - imagination, wishful thinking, states of fear, hallucinations and visions of the end of the world. The fictional narrator, like Kubin a draftsman by profession, is invited by an old school friend to the dream realm he has created, where he spends three years. The initial fascination gives way to an ever stronger horror until the dream city “Pearl” finally collapses in an apocalyptic scenario. The narrator escapes as one of the few and records his experiences in writing under the protection of a sanatorium.

An exchange of letters and four illustrations suggest that a friendship between Kubin and Alfred Karl Mayer, who had been mistaken for a long time, existed even before 1913. It can be assumed that Mayer built up a relatively extensive Kubin collection over the years on the basis of private and business contacts. Further research is reserved to find out which works by Kubin belong to the former property of Mayer.

Also in 1909 he founded together with u. a. Wassily Kandinsky , Alexej von Jawlensky , Adolf Erbslöh , Gabriele Münter , Marianne von Werefkin and Karl Hofer form the Neue Künstlervereinigung München (NKVM). The NKVM became the editorial office of the Blauer Reiter in 1911 , and in 1912 he took part in the second exhibition, which only included graphic works. He illustrated around 60 books, including works by Dostojewski , Edgar Allan Poe and Elias Canetti , published graphic portfolios (1921 "On the Edge of Life", 1918 "A Dance of Death", 1941 "Adventure of a Drawing Pen", 1943 "The Planets") and left thousands of pen drawings. Kubin had also been a member of the Innviertel Artists' Guild since 1923, to which he remained loyal when it was re-established in 1947. In the 1920s he attended literary evenings with his friend, businessman, art collector and Bauhaus sponsor Otto Bamberger , who also acquired Kubin's graphic works. From 1930 Kubin was a member of the Prussian Academy of the Arts in Berlin. In 1949 he became a member of the Bavarian Academy of Fine Arts . Kubin was also a member of the Prague Secession .

Kubin's grave at the church in Wernstein

In 1931, Kubin created the set for Richard Billinger's drama Rauhnacht for its world premiere on October 10, 1931 at the Münchner Kammerspiele , directed by Otto Falckenberg . In several graphic sheets Kubin dealt with the literary work of Billinger, Billinger in turn dedicated several poems to Kubin. Between 1933 and 1936 he had an intense love affair with the doctor's wife Emmy Haesele (1894–1987), who became a painter under his influence. Traces of this love affair can also be found in the series of lithographs Ali, the gray stallion , the illustrated life story of a boisterous Tatar horse that ends in isolation. The first letters of Kubin's three first names form the name ALI. As an artist's wife, his wife showed understanding, but increasingly suffered from her husband's lovelessness and demanded a decision that was then in her favor.

During the Nazi era , 63 of his works were defamed and confiscated as “ degenerate art ”. Nevertheless, he was not banned from exhibiting, but was able to publish various drawings in the General Government's Nazi propaganda sheet , the Krakauer Zeitung , in 1941/42 .

Kubin died on August 20, 1959 in Zwickledt and was buried in the cemetery in Wernstein. The design of his grave was made by the sculptor Karl Prantl .

Alfred Kubin was a cousin of the art historian Otto Kletzl .

Kubin's work is characterized by the representation of fantastic dream visions , which are represented with nervous drawing lines. Kubin was inspired by the visionary and symbolic works of Francisco de Goya , James Ensor , Odilon Redon , Edvard Munch and Max Klinger , among others . He worked almost exclusively as a graphic artist. As a full member of the German Association of Artists , he also took part in the DKB annual exhibitions in the mid-1950s.

In 1955, Kubin bequeathed his entire artistic estate to the Austrian state and the province of Upper Austria in return for a modest annuity . Since his death, his work has been partly in the State Collection of Graphic Art Albertina in Vienna, partly in the Upper Austrian State Museum in Linz . He also acquired 1179 sheets from the artist's graphic collection, mainly prints by Albrecht Dürer , Jacques Callot , Paul Gauguin , Edvard Munch, Auguste Rodin , James Ensor, Francisco de Goya, Félicien Rops . Through further acquisitions and donations as well as the acquisition of 615 drawings and lithographs by his collector friend, the Wernstein pastor Alois Samhaber, this collection of more than 4000 objects expanded to the world's largest collection of original works by Alfred Kubin. The holdings of the Lentos Art Museum in Linz are the third largest collection of graphics, mixed media, portfolios and artist letters in Austria . The comprehensive catalog also documents the relationship between Kubin and his gallery owner Wolfgang Gurlitt .

The Kubin Archive Municipal Gallery in the Lenbachhaus in Munich has a special place as a research center ; it was acquired in full in 1971 by the Hamburg pharmacist Kurt Otte as a supplement to the Blauer Reiter collection . The foundation of the couple Reinhold Koeppel and Hanne Koeppel, who are friends with Kubin, forms the basis of the Kubin collection in the Art Forum Ostdeutsche Galerie Regensburg.

Exhibition hall in the Kubin House in Zwickledt

The "Kubin Memorial" has existed in Zwickledt since 1962 and has been looked after by the Upper Austrian State Museum since 1992. In 1995 the Alfred Kubin Project of the Province of Upper Austria was set up. In 1964, his works were shown in the hand drawings department at documenta III in Kassel . In the same year 299 of his works were on view in the Kestner Society in Hanover. The Alfred Kubin Prize is part of the culture prize awarded by the State of Upper Austria . In 1977, Alfred-Kubin-Platz in Vienna- Donaustadt (22nd district) was named after him.

On September 25, 2010 the world premiere of Michael Obst's opera The Other Side, based on the novel of the same name by Alfred Kubin, took place in the Mainfranken Theater in Würzburg . The music is composed of orchestral parts and electronic sounds, the intensity of which increases with the increasing apocalyptic threat to the content.

From October 8, 2018 to February 2019, Kubin's works were shown in the exhibition Fantastic! Alfred Kubin and the Blue Rider can be viewed in the Städtische Galerie im Lenbachhaus and Kunstbau Munich. For the first time, the exhibition traced the complex personal and artistic interrelationships with the Munich artist group with a wealth of works, documents and photographs.

On the occasion of the 60th anniversary of his death in 2019, the gallery W&K - Wienerroither & Kohlbacher presented the exhibition Alfred Kubin - Fantastic Worlds in Vienna from January 10 to March 22, 2019 . As part of the exhibition, drawings and graphics, from early work to late creative years, were shown. In addition, Annegret Hoberg , the manager of the collection of the Kubin Archive in the Lenbachhaus Munich, guided through the exhibition in the form of an expert talk.

Alfred Kubin at the art market

In addition to lithographs by Alfred Kubin, which can be found frequently, original works by the artist also come onto the art market. A large part of the trade in original works traditionally takes place via specialized galleries such as the Galerie Altnöder or W&K - Wienerroither & Kohlbacher, which publish monographic exhibitions as well as accompanying exhibition catalogs and research results.