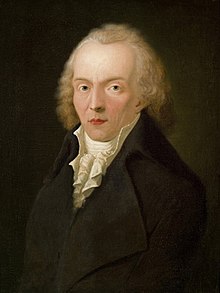 Johann Paul Friedrich Richter, who later called himself Jean Paul, was born in Wunsiedel as the son of the teacher and organist Johann Christian Christoph Richter and his wife, the clothmaker's daughter Sophia Rosina, née Kuhn . In 1765 his father became pastor in Joditz im Hofer Land (since 1978 part of the Köditz community ), in 1776 he got a better job in Schwarzenbach an der Saale . The atmosphere of the Protestant country parsonage shaped Jean Paul's childhood. He was made familiar with the ideas of the Enlightenment less through his conservative father than through a revered teacher and the pastor of the neighboring town of Rehau , Erhard Friedrich Vogel . Apart from the political and literary centers of his time, Jean Paul trained himself as an autodidact and at the age of fifteen he had extensive knowledge of books that he gathered in excerpts . In 1779 Jean Paul moved to the high school in Hof , where he met Johann Bernhard Hermann , who became a close friend and a role model for many of his fictional characters, such as the personal giver in Siebenkäs . A few months later, his father died, which plunged the family into serious financial hardship.

In May 1781, Jean Paul enrolled at the University of Leipzig , but pursued his theology studies only very listlessly. Instead, he began to see himself as a writer: after his first literary experiments, he mainly wrote satires in the style of Jonathan Swift and Christian Ludwig Liscow , which were printed in a collected form in 1783 as Greenlandic Trials . After this first publication, however, there were no further successes. In 1784 Jean Paul had to flee from his creditors and returned to his mother's house at Hof as a “failed existence”. How he felt there can be read in his later novel Siebenkäs . In addition to the oppressive poverty of those years, Jean Paul was also burdened by the death of a friend in 1786 and the suicide of his brother Heinrich in 1789. It was only when Jean Paul found a livelihood as a private tutor for the Oerthel family in Töpen from 1787 that his plight gradually eased . 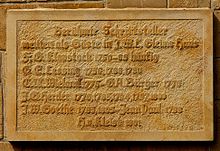 In 1798 Jean Paul stayed in the Gleimhaus in Halberstadt 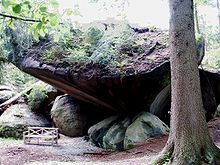 The series of his literary successes began in 1793 with the novel The Invisible Lodge . Jean Paul had sent the manuscript to the writer Karl Philipp Moritz , and Moritz was enthusiastic: “Oh no, that's still about Goethe, that's something completely new!” He is supposed to have said, and through his mediation the book quickly found one Publishing house in Berlin. In The Invisible Lodge , Jean Paul, who had previously written his work under the pseudonym JPF Hasus, used the name Jean Paul for the first time out of admiration for Jean-Jacques Rousseau . But The Invisible Lodge remained a fragment, because Jean Paul devoted himself to a new novel, Hesperus or 45 Hundposttage , which appeared in 1795. The book, which became the greatest literary success since Goethe's The Sorrows of Young Werther , suddenly made Jean Paul famous. Johann Gottfried von Herder , Christoph Martin Wieland and Johann Wilhelm Ludwig Gleim were enthusiastic about the Hesperus - Johann Wolfgang von Goethe and Friedrich Schiller , however, did not like the novel. 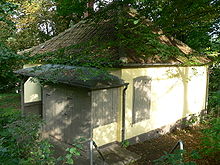 At the invitation of his admirer Charlotte von Kalb , Jean Paul visited Weimar in 1796 . He was respectfully received in the literary center of his time, but the relationship with classics like Goethe and Schiller remained rather cool and distant. Two years later Jean Paul moved to Weimar; in the meantime he had a considerable number of literary works to show: Siebenkäs (1796/97), The Life of Quintus Fixlein (1796), The Jubelsenior (1797), The Campan Valley (1797). In Weimar in particular, the erotic entanglements that accompanied Jean Paul throughout his life increased: he became engaged to Karoline von Feuchtersleben, which caused some difficulties due to the difference in class - and when these were finally resolved, Jean Paul broke up again. With Charlotte von Kalb, too, he had to constantly work out new strategies to avoid marriage. But even Jean Paul, who was shy of marriage, “could not escape his fate”: In the spring of 1800, on a trip to Berlin , he met Karoline Mayer, whom he married a year later.

The trip to Berlin represented the high point of his literary fame: The Prussian Queen Luise , who had met him at her sister Charlotte's “Little Musenhof” in Hildburghausen , showed herself to be an enthusiastic reader of his works. This made Jean Paul move to Berlin in October 1800, where he made friends with the brothers August Wilhelm and Friedrich Schlegel as well as with Johann Ludwig Tieck , Friedrich Daniel Ernst Schleiermacher and Johann Gottlieb Fichte .

Board at the house at Friedrichstrasse 5

The tomb of Jean Paul and his son in the Bayreuth city ​​cemetery: The memorial stone is a boulder overgrown with ivy .

But from the peak of success things gradually went downhill: Jean Paul's next novels Titan (1800–1803) and Flegeljahre (1804/1805) no longer generated the previous enthusiasm among readers, although they are now considered his most important works.

In 1804 he moved to Bayreuth with his wife and two children , after living in Meiningen from 1801 to 1803 and then in Coburg . In Bayreuth he led a withdrawn life from then on, interrupted only by a few trips, for example to Bamberg , where he visited ETA Hoffmann , and to Heidelberg , where in 1817, after an extensive punch feast , he was awarded an honorary doctorate on Hegel's suggestion . His political statements (for example in Cottas Morgenblatt ) met with a lively response, especially from patriotic students. Jean Paul became a leading figure in the German fraternities. During visits to Heidelberg (1817) and Stuttgart (1819) he was even raised to the title of “Germans' favorite poet”. From 1793 until his death, his closest friends and confidants in Bayreuth included the wealthy Jewish businessman Emanuel Samuel , who became an advisor in all family and financial matters and a regular correspondent, as well as the factory owner and private scholar Georg Christian Otto , with whom Jean Paul had been since School days and who stood by his side as a proofreader and well-meaning literary critic.

Jean Paul's works from these years, such as Levana or Erziehlehre (1807) or Dr. Katzenberger's bathing trip (1809) no longer received the attention that Hesperus had received. In 1813 Jean Paul began his last great novel, The Comet , but the death of his son Max in 1821 was a stroke of fate that the author could not get over: The comet was abandoned and remained a fragment. The last years of his life were marked by illnesses: in 1823 Jean Paul fell ill with cataracts and gradually went blind. In 1825 dropsy of the breasts was added, of which he died on November 14th. He is buried in the city cemetery in Bayreuth.

In 1820 the Bavarian Academy of Sciences had appointed him a foreign member.

The Rollwenzelei , a former inn in Bayreuth on the road to Weiden near the Hermitage , was one of his favorite places, where he also wrote poetry. The former poets' room was completely renovated in 2009/2010. It is a small museum with original inventory.

Thoughts before breakfast and before the night piece in Löbigau , 1819

Jean Paul occupies a special position in German literature and has always divided the reading public. With some he earned the highest admiration, with others shaking their heads and disinterest. He took the flowing formlessness of the romantic novel to extremes; August Wilhelm Schlegel called his novels "self-talk", in which he let the reader participate (to the extent that an exaggeration of what Laurence Sterne had started in the Tristram Shandy ). Jean Paul was constantly playing with a variety of funny and bizarre ideas; his works are characterized by wild imagery and rambling, sometimes labyrinthine actions. In them Jean Paul mixed reflections with poetological and philosophical comments; In addition to witty irony, there are suddenly bitter satire and mild humor, alongside sober realism there are transfiguring, often ironically broken idylls, social criticism and political statements are also included.

Female readers especially appreciated his novels. This was mainly due to the empathy with which Jean Paul was able to design the female characters in his works: never before had female characters been depicted with such psychological depth in German literature. However, nowhere else can you find such amusing misogyne taunts as with Jean Paul. Jean Paul's character must have been as varied and confusing as many of his novels: He was probably very sociable and witty, at the same time extremely sentimental, with an almost childlike disposition and quickly moved to tears. His works show again and again how much he was interested not only in literature, but also in astronomy and other sciences.

With such a capricious author, it is hardly surprising that his relationship to the Weimar classics Goethe and Schiller was always ambiguous (Schiller said that Jean Paul was "as strange to him as someone who fell out of the moon"). Herder and Wieland, however, appreciated and supported him. Although he always kept his distance from the classics who wanted to make art absolute and in his theoretical approach - for example in his preschool of aesthetics  - clear influences of romanticism can be seen, he is ultimately not to be counted among the romantics. Here too he kept a critical distance; for despite all the subjectivism he did not absolutize the author's ego: Jean Paul possessed a sense of humor, which had become rare between classical seriousness and romantic irony . He also dealt with the nature of humor in detail - perhaps as the first.

Both the Enlightenment and metaphysics had failed for him, nevertheless they had their place in his worldview. In this way he arrived at a worldview without illusions, combined with humorous resignation. It is fitting that Jean Paul was one of the first advocates of Arthur Schopenhauer's philosophy . He did not try to indoctrinate, but to portray human happiness.

In his writings, Jean Paul not only mentions the literary motif of the " doppelganger " by name and thus shapes it, but also shapes it in countless variations (cf., among others, Siebenkäs and Leibgeber; Schoppe, Liane and Idoine; Roquairol and Albano ). This is how he defines in his Siebenkäs : "Doppelganger (that's the name of people who see themselves)."

Jean Paul's work reflects the entire ideological spectrum of his time. Although E. T. A. Hoffmann's work in its grotesque comedy or in the adoption of the motif of the doppelganger was close to that of Jean Paul - he did not have a successor in the real sense. However, the early Adalbert Stifter was under his influence and in Wilhelm Raabe's work numerous borrowings from Jean Paul can be found. At best, authors of the 20th century such as Georg Heym , Hermann Burger , Albert Vigoleis Thelen and Arno Schmidt can also be regarded as heirs to Jean Paul's prose due to their artistry and digression . Jean Paul enjoyed high esteem again and again in these later generations of poets. From Arno Schmidt comes the quote that Jean Paul was "one of our greats (...), one of the twenty for whom I would fight with the whole world".

In the 21st century, Walter Kappacher refers to Jean Paul's Das Kampaner Tal and the unfinished sequel Selina in his novel Selina or The Other Life through the title variation and the preceding motto "An eternal being watching a being pondering about its destruction." or about immortality . The protagonists Stefan and Heinrich Seiffert discuss Jean Paul's thoughts on how to live after earthly death. 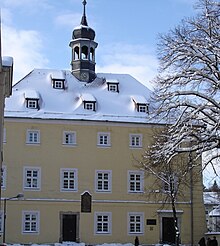 Music hall of the Jean-Paul-Gymnasium in Hof, which Jean Paul attended from 1779–1781.