The title of this article is ambiguous. Further meanings are listed under seven star (disambiguation) .

The seven star ( Trientalis europaea , syn .: Lysimachia europaea (L.) U. Manns & Anderb. ) Is a species of plant that belongs to the subfamily of the myrsine family (Myrsinoideae) in the family of the primrose family (Primulaceae). It is also called the European seven star . Its name is derived from the white flowers with usually seven petals. They are small plants that are widespread in the northern hemisphere and occur in acidic soils that are poor in bases. 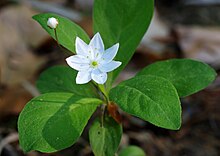 The seven star is a perennial herbaceous plant . It survives the winter with a small tuber from which the 10 to 25 centimeter high stalk sprouts in summer . This bears a leaf whorl and one or two flowers.

The rhizome of the seven-pointed star is white and thin, it measures 0.6 to 1.5 millimeters in diameter and reaches 5 to 7.5 centimeters in length. It usually grows unbranched horizontally about 2 to 5 centimeters below the surface of the earth, at intervals it is covered with scale-like lower leaves .

At its end, a small, elongated tuber develops that is one centimeter long and 0.3 to 0.4 centimeters wide. With this tuber the plant survives the winter. The renewal bud, which is curved upwards in the shape of a hook, sits on the side facing away from the rhizome. The connection between the individual tubers disappears very quickly, so that clonally independent ramets arise. One to five rhizomes can arise from each tuber.

The roots do not arise from the rhizome, but only from the tuber. They are often unbranched, but can be single or double branched. These branches carry root hairs. The root system is located in the raw humus and extends to a depth of 15 centimeters. Occasionally arbuscular mycorrhizal fungi were found in the roots, but not everywhere and not with great intensity.

From each tuber a single, 10 to 25 centimeter long stem arises, which carries a leaf whisk and the flowers. Up to six smaller leaves are alternate on the shoot below the leaf whorl; but these can also be completely absent. The leaves are simple, obovate to lanceolate, wedge-shaped at the base and without a petiole. The leaf margin is smooth, sometimes finely serrated in the front part of the leaf. The color of the leaves is a shiny green. There are five to eight (less often three to ten) in a whorl at the end of the stem, below the flower. The dimensions of the leaves vary in length from 1 to 9 centimeters, in width from 0.5 to 1.5 centimeters; often there are leaves of different sizes on a plant.

Occasionally the stem branches just below the surface of the earth and forms another, smaller stem with leaves, which usually does not flower. Branches in the aboveground area of ​​the stem are less common. Such branches can also behave like rhizomes, grow back into the ground and form a tuber there.

A thread-like flower stalk up to 7 centimeters long arises from one to two (rarely up to four) leaf axils. The single flower at its end measures 1 to 2 centimeters in diameter, it is white or slightly pink. The flowers are usually seven-fold, rarely the flower parts occur in five to nine. The sepals are linear, the petals oval, pointed and twisted in one direction in the bud position . The stamens are shorter than the petals. The ovary is above and usually composed of five carpels.

The 0.6 centimeter capsule fruit opens in five parts and releases about six to eight seeds .

The stem emerges from the tuber in spring. The flowering period extends from May to July; at the same time, the short rhizomes grow underground from the tuber. The flowers are pollinated by various insects; self-pollination is also possible. The seeds ripen above ground by autumn, below ground the nodules for overwintering form at the ends of the rhizomes. Around September leaves and stems wither, and the connection between the individual tubers also loosens underground: fragmentation. 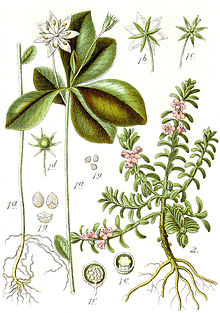 The distribution is Euro-Siberian and North American. The seven-pointed star is rarely found in the Swiss Alps (found in the cantons of Graubünden and Schwyz ); there it rises to altitudes of 2100 meters.

As a raw humus plant , the seven star prefers deciduous and coniferous forests rich in moss as locations. Also fens are among his growing areas. It can be found along streams , in swamps and transitional marshes, as well as in humus-rich spruce and pine forests. The seven-star avoids lime. In the Hercynian area it is a character species of the Calamagrostio villosae-Piceetum from the Piceion association, but nationally a species of the societies of the Linnaeo-Piceion association, the Quercion roboris, the Luzulo-Fagenion sub-association and the Vaccinio uliginosi-Pinetum rotundifolii of the raised bog edges.