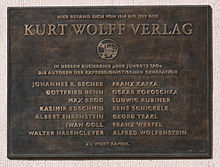 Memorial plaque in the graphic quarter of Leipzig

Kurt August Paul Wolff (born March 3, 1887 in Bonn , † October 21, 1963 in Ludwigsburg ) was a German publisher . He founded the most important publishing house for Expressionist literature in Germany at the time: Kurt Wolff Verlag , which existed from 1913 to 1940.

Kurt Wolff was born in Bonn in 1887 as the son of the professor of music history Leonhard Wolff, his mother came from a Jewish family. From 1904 to 1906 he attended the Philippinum grammar school in Marburg, where he graduated from high school. In 1907 Wolff married the seventeen-year-old Elisabeth Merck. The following year he met Ernst Rowohlt in Leipzig, who founded his publishing house in 1908 and Wolff became its silent partner . On November 1, 1912, Rowohlt left the joint company due to personal differences, which Wolff took over and renamed Kurt Wolff Verlag . The house soon gathered important contemporary authors, including a.

Some writers like Franz Werfel and Kurt Pinthus even worked actively as lecturers in the company. The high-quality and beautiful furnishings of the books played an important role right from the start. The bibliophile series of Drugulin prints was created as early as 1910 , with particular attention being paid to typography and printing. Thanks to their moderate prices, the works were affordable even for less well-off buyers. The Drugulin office , into whose house the publishing house had moved, already achieved worldwide recognition for its work. In 1918 the publisher bought the company, which later passed into other hands.

From Heinrich Mann a complete edition was published in 1916 and 1918 the book The subject , which achieved within six weeks of the publication with a circulation of 100,000 copies.

Since Kurt Wolff had to go to war, in 1914 he appointed Georg Heinrich Meyer as the publishing director in charge, who successfully ran the publishing house until Wolff was dismissed from the army in September 1916 on the initiative of Grand Duke Ernst Ludwig von Hessen and was able to work again as a publisher .

In 1919 the company, which had meanwhile grown to 60 employees, moved from Leipzig to Munich. In the same year Genius appeared . Magazine for ancient and emerging art ; it had to be stopped again in 1921. The publishing program at that time comprised world literature as well as poetry and drama . Since the twenties, the publisher has concentrated increasingly on international literature and art publications. 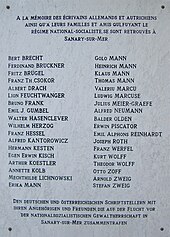 Memorial plaque for the German and Austrian refugees in Sanary-sur-Mer , including Kurt Wolff

In 1924, Wolff founded the Pantheon Casa Editrice SA publishing house in Florence , in which elaborately produced monumental art history editions appeared in many European editions. At the beginning of the 1930s, the Munich house fell into an ever deeper financial crisis, and Wolff gradually began to liquidate its holdings. He divorced his wife, with whom he had two children (Maria and Nikolaus), in 1930 and emigrated to a village near Florence. On March 27, 1933, he married his second wife, Helen Mosel, in London . With her he ran a kind of pension in Florence. In 1938 he fled to France with her and their child (the composer Christian Wolff ). Two years later - Wolff had also been interned in the meantime - they managed to escape from there at the last minute to the USA, where Wolff and his wife founded Pantheon Books, Inc. in New York in 1942 , which was soon very successful. Sometimes English translations by German poets were published here. In 1960 he separated from Pantheon Books and returned to Europe. During a visit to Germany in 1963, on the way to the German Literature Archive in Marbach, Wolff was hit by a truck and succumbed to his injuries shortly afterwards. He was buried in Marbach.

In 1933, Peter Reinhold acquired the majority of shares in the business until the name Kurt Wolff-Verlag finally expired in 1940 and was renamed Genius Verlag . After the owner's death, the company was dissolved in 1956.

Kurt Wolff and his authors

Kurt Wolff's relationship with Karl Kraus deserves special mention . In 1912, the then 25-year-old Wolff was made aware of Kraus by Franz Werfel . Werfel, himself only 22 years old, was working as an editor for the Kurt Wolff Verlag at the time and, as Wolff himself later noticed, one of Kraus' "possessed". Wolff said he had not yet read a line by Kraus, but was supplied with the “torch” by Werfel, who hymnically praised Kraus at the time, and always asked to visit Kraus in Vienna and win him over as an author for the Kurt Wolff Verlag . So Wolff went to Vienna to meet Kraus, "- unfamiliar with the work, clueless, and of an impartiality and naivety that I would certainly not have had a few years later." But Kraus received the "noble youth" very friendly, took him, who obviously felt uncomfortable in the coffee house, to his apartment on Lothringerstrasse after an hour and talked to him until dawn. And so in October 1913, two contracts were actually signed between Kraus and Kurt Wolff Verlag for book publications. The first contract related to “Culture and Press”, a book that never went to print, the second to “The Fall of the World Through Black Magic”, which was only published after the final separation from Kurt Wolff. But despite personal esteem, there was initially no publication, as Kraus did not want to appear in the same publishing house as the writers against whom his polemics were directed. Personal attacks by Wolff authors Kurt Hiller and Max Brod led to the contract being terminated as early as December 1913.

It was Wolff who - in the summer of 1915 - proposed a solution: He wanted to found a publishing house called "Verlag der Schriften von Karl Kraus (Kurt Wolff)", in which only Kraus' books would appear. Kraus, initially astonished, accepted the proposal, and the publishing house for a single author, Karl Kraus, which Wolf later referred to as "chambre separée", was founded in Leipzig in the autumn of the same year. It appeared until the end of the publishing relationship (the publishing relationship ended de facto in spring 1921, nominally the "Verlag der Schriften von Karl Kraus [Kurt Wolff]" was not dissolved until August 1923); its rights went to the publishing house " Die Fackel " Vienna - Leipzig over) five volumes of "Words in Verses", furthermore "Nachts", "Weltgericht" (in two volumes) and "Selected Poems" (Kurt Wolff was allowed to make the selection, which was by no means a matter of course). In addition, the publisher published reprints of "The Great Wall of China", "Proverbs and Contradictions" and "Pro domo et mundo".

From the correspondence between Wolff and Kraus and the publishers “Die Fackel” and the “Verlag der Schriften ...” it can be seen how difficult the cooperation was, especially with regard to the highest demands that Kraus placed on the printer. The Drugulin print shop, praised in some places for its bibliophile editions, is attacked by Kraus precisely because it puts a “good” over a “good” print, which in practice u. a. meant that after the imprimatur the typesetters or proofreaders made unauthorized changes. This not only led to discrepancies between Kraus and the publisher or printer, but not infrequently also to considerable additional work, because entire sheets had to be printed again.

A conflict between Werfel and Kraus had arisen as early as 1913, the occasion of which was a private one: Werfel was in Dresden in October of that year for a theater performance (“L'annonce faite à Marie” by Paul Claudel, October 5, 1913) Sidonie Nádherná from Borutín , Rainer Maria Rilke and Lou Andreas-Salomé . Just a few weeks earlier, Karl Kraus and Sidonie von Nádherný had met in Vienna, which immediately resulted in a very intense love affair. Rilke and Nádherný had known each other for several years. Werfel, who felt rejected by Nádherný at this meeting, retaliated by spreading the rumor of a liaison between her and Rilke. When this rumor reached Kraus, it caused him to break off his contact with Werfel, whom he later attacked because of his works, which led to furious counterattacks. This conflict was to continue for years and also lead to the break between Wolff and Kraus.

The immediate reason for this break was the publication of Werfel's play "Spiegelmensch", which he called the "Magical Trilogy" and which contains a level and insulting caricature by Karl Kraus, in Kurt Wolff Verlag. It is documented that Wolff tried to have a moderating effect on Werfel, but that he did nothing to prevent the publication of the piece in his own publishing house. Kraus then publicly terminated the publishing relationship and any other. Kurt Wolff's request for an interview was not granted.

Nevertheless, decades later Kurt Wolff remembers the end of this ten-year relationship without bitterness: “When the mirror man bomb burst, I was waiting for the lightning bolt from Jupiter. It seemed to me that I deserved it. My attempt to prevent Werfel from engaging in an unworthy, base polemic had been inadequate. I shouldn't have printed this and published it under my name. And not only would I have acted more loyally to Kraus, I would have done a friendship service to Franz Werfel - he too was a young person under thirty. The lightning bolt was due. But - oh wonder - it didn't come, it never came… But it was inevitable that my private relationship with Kraus would also end with the Spiegelmensch incident and the subsequent termination of our publishing connection. My inner relationship with him and his work never changed. And my warm friendship with Werfel remained untouched. "

Wolff's estate has been kept in the Kniecke Rare Book and Manuscript Library at Yale University since 1947 as the "Kurt Wolff Archive, 1907–1938". The collection includes around 4100 letters and manuscripts from Kurt Wolff Verlag from 1910 to 1930. In addition, the German Literature Archive in Marbach has an extensive collection on Kurt Wolff, including his correspondence with Boris Pasternak .

The Kurt Wolff Foundation , established in 2000, has been awarding the Kurt Wolff Prize since 2001 to promote and encourage stubborn, independent publishers. The main prize is endowed with 26,000 euros, the sponsorship award with 5,000 euros.

(in order of appearance)