This article describes the composer Wolfgang Rihm. For the actor see Wolfgang Riehm . 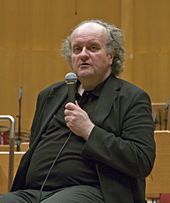 Wolfgang Rihm grew up in Karlsruhe. Inspired by early encounters with painting, literature and music, he began to compose in 1963. During his school days at the humanistic Bismarck-Gymnasium , he studied composition from 1968 to 1972 with Eugen Werner Velte at the Karlsruhe University of Music . He occupied himself with the music of the Second Viennese School , orchestrated Arnold Schönberg's Piano Pieces op. 19 and temporarily oriented himself towards Anton Webern's aphoristic, concise style . Wolfgang Rihm's other composition teachers were Wolfgang Fortner and Humphrey Searle . In parallel with his Abitur, he passed the state examination in composition and music theory at the Musikhochschule in 1972. This was followed by studies with Karlheinz Stockhausen in 1972/73 in Cologne and from 1973 to 1976 at the Hochschule für Musik Freiburg with Klaus Huber (composition) and Hans Heinrich Eggebrecht (musicology). Rihm gained his first own experience as a lecturer from 1973 to 1978 in Karlsruhe, from 1978 at the Darmstadt summer courses (which he had attended since 1970) and in 1981 at the Munich Music Academy . In 1985 he took over the chair for composition at the Karlsruhe University of Music as the successor to his teacher Eugen Werner Velte .

After performing his orchestral piece Morphonie - Sector IV at the Donaueschinger Musiktage in 1974, Rihm found widespread recognition within the music business in the following years. Since 1982 he has been a member of the Presidium of the German Composers' Association , since 1984 a member of the Presidium of the German Music Council , since 1985 a member of the Board of Trustees of the Heinrich Strobel Foundation, and since 1989 a member of the GEMA Supervisory Board . 1984/85 and 1997 he was a fellow at the Wissenschaftskolleg zu Berlin and member of the presidium of the German Music Council , 1984 to 1989 co-editor of the music magazine Melos , 1984 to 1990 musical advisor to the Deutsche Oper Berlin , 1990 to 1993 musical advisor to the Center for Art and Media (ZKM) in Karlsruhe. At the invitation of Walter Fink , he was the fifth composer in the annual composer portrait of the Rheingau Music Festival in 1995 . The Free University of Berlin recognized him in 1998 with an honorary doctorate as an artist, who “embodies the freedom of the creative in his extremely extensive compositional work and advocates an aesthetic of freedom of art, who has written numerous theoretically well-founded writings that are of extraordinary musicological importance . “In 2013/2014 he was Capell Compositeur for the Sächsische Staatskapelle Dresden . In the summer of 2016, Rihm took over the overall artistic direction of the Lucerne Festival Academy founded by Pierre Boulez .

Wolfgang Rihm lives in Karlsruhe and Berlin . He has a son and a daughter.

As a composer and music writer, Rihm represents an aesthetic that focuses on the subjective need for expression. For him, role models in this sense were Hans Werner Henze , later Karlheinz Stockhausen and even later Luigi Nono . In addition, literary texts gave him important impulses: the poetry of Paul Celan , the philosophy of Friedrich Nietzsche , the theater writings of Antonin Artaud and Heiner Müller . The idea of ​​a “work in progress” formulated by James Joyce has influenced him insofar as he likes to view his pieces as temporary arrangements (“attempts”) that - by expanding, supplementing, adding, interlinking and interweaving the material once developed - continuously correct or add to. Rihm likes to use metaphors from the visual arts for this, he speaks of “painting over” or of sculpture: “I have the idea of ​​a large block of music that is inside me. Each composition is at the same time a part of him, as well as a physiognomy carved into him. "

There are comparable processes in the work of Pierre Boulez (who speaks of “derivatives” and “growths”). In 1973 Rihm met the Austrian painter Kurt Kocherscheidt , whose open, radical style of drawing appealed to him immediately. He was also influenced by young artists from the Karlsruhe Art Academy , who have taught there since the 1970s and who would later become the most important representatives of German painting of the 1980s, including Markus Lüpertz , Georg Baselitz and Per Kirkeby .

Stylistically, there are roughly three periods in Rihm's oeuvre: his early pieces build on a tradition that spans from Beethoven's late instrumental works to Schönberg , Berg and Webern . Because of its decided subjectivity, Rihm's music was sometimes assigned to the so-called New Simplicity . From the 1980s onwards, a laconic, expressive style developed; Sounds are interpreted as signs ("ciphers"), in the sense of a new exploration of musical semantics . From the 1990s onwards, these two positions finally appeared as thesis and antithesis; at the same time, Rihm is always looking for ways of synthesis. The increasing conciseness of the musical formulation creates structures of high virtuosity.

In addition to numerous compositions for smaller ensembles and three symphonies, he writes stage works. He first made known the chamber opera Faust and Yorick (1976; with a libretto by Frithjof Haas based on the play of the same name by Jean Tardieu ). The chamber opera Jakob Lenz, premiered in 1979 by the Hamburg State Opera , was a great success . The Hamlet Machine followed between 1983 and 1986 , a music theater piece in five parts with a libretto based on the play of the same name and in 1987 Oedipus based on or with texts by Sophocles . In 1992 the Hamburg State Opera brought The Conquest of Mexico to the stage by him. Proserpina (2009), based on the play of the same name by Johann Wolfgang von Goethe in the Schlosstheater in Schwetzingen , the opera Dionysus (2010; Salzburg, Berlin, Amsterdam) and a horn concerto (2013-2014) are his most recent major works. Rihm was commissioned with a composition for the opening event in Hamburg's Elbphilharmonie in the Great Hall on January 11, 2017. The NDR Elbphilharmonie Orchester with T. Hengelbrock as conductor premiered the triptych and slogan in memoriam Hans Henny Jahnn thanks to radio, television and online broadcasts in front of an audience of millions across Europe. Rihm never met Hans Henny Jahnn .

Laureate of the Christoph and Stephan Kaske Foundation