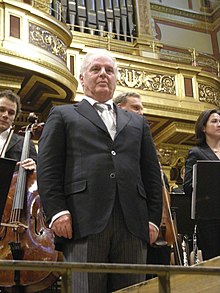 Daniel Barenboim ( Hebrew דניאל בארנבוים; * November 15, 1942 in Buenos Aires , Argentina ) is an Argentine - Israeli pianist and conductor . He has received numerous international honors and awards, including the German Great Federal Cross of Merit . He is a citizen of Spain, Argentina, Israel and Palestine.

Daniel Barenboim at State Opera for Everyone , Berlin 2014

Barenboim was on November 15, 1942 Buenos Aires , the son of Russian - Ashkenazi born parents. From the age of five he received private piano lessons from his parents. On August 19, 1950, Barenboim gave his first concert in Buenos Aires at the age of seven. In 1975 he succeeded Sir Georg Solti as chief conductor of the Orchester de Paris . From 1981 to 1999 Barenboim was the conductor of the Bayreuth Festival , where he conducted Tristan and Isolde , Die Meistersinger von Nürnberg , Parsifal and the tetralogy Der Ring des Nibelungen .

From 1991 to 2006 he was chief conductor of the Chicago Symphony Orchestra , and since 1992 he has been artistic director and general music director of the Staatsoper Unter den Linden in Berlin for life . In autumn 2000 he was elected chief conductor for life by the orchestra of the Staatskapelle Berlin . In July 2011, the Berlin Senate Chancellery announced that Barenboim had extended his contract for a further ten years until the end of July 2022.

From 2006 to 2011 Barenboim was principal guest conductor at La Scala in Milan and was subsequently appointed music director of the opera house.

From June 1967 until her death in 1987 Barenboim was married to the cellist Jacqueline du Pré . He has been married to the pianist Jelena Bashkirowa since 1988 for the second time . They have two sons together, Michael Barenboim , classical violinist , and producer and songwriter David Barenboim (stage name: KD-Supier ). 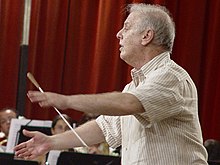 Daniel Barenboim rehearsing with the West-Eastern Divan Orchestra in Seville, 2005

In 1990, after the death of Herbert von Karajan , Barenboim conducted the Berliner Philharmoniker on their first-ever Israel tour, which received international attention and was initiated and organized by their longstanding first violinist and orchestra director Hellmut Stern . In 2001, however, Barenboim received heavy criticism from audiences, artists and cultural workers and politicians in Israel when he performed an orchestral excerpt from Wagner's Tristan und Isolde as an encore during a guest performance by the Staatskapelle Berlin . According to the unwritten law, music by Richard Wagner is  not publicly performed in Israel because of the composer's anti-Semitic attitude and the use of his music under National Socialism . Some members of the Knesset's education committee wanted Barenboim to be declared a cultural persona non grata , which ultimately did not find a majority.

Together with the Palestinian literary scholar Edward Said and the German cultural manager Bernd Kauffmann , he founded the West-Eastern Divan Orchestra in 1999 . Barenboim is committed to bringing the hostile ethnic groups closer together in the Middle East conflict. Half of the orchestra is made up of young musicians from Israel and the other half from the Palestinian territories, Lebanon, Egypt, Syria, Jordan and Spain. In August 2005, the orchestra gave a highly regarded concert in Ramallah , which was broadcast live on television in many countries.

On May 10, 2004 Daniel Barenboim was awarded the Wolf Prize for friendly relations among the peoples in the Knesset, the Israeli parliament . In his acceptance speech, Barenboim quoted from the Israeli declaration of independence and others. a. following passage. “The State of Israel ... will guarantee all its citizens, regardless of religion, race or gender, social and political equality.” He then said: “With deep concern I ask today whether the occupation and control of another people with Israel's declaration of independence will result Can be reconciled. What about the independence of a people if the price for it is a blow to the fundamental rights of another people? ”This led to a scandal when the Israeli Minister of Education, Limor Livnat Barenboim, replied that she had abused Parliament as a stage to attack Israel. Barenboim donated the $ 50,000 prize money for the musical education of Israeli and Palestinian children.

Between February and April 2006, Barenboim gave lectures in various locations (London, Chicago, Berlin, East Jerusalem and West Jerusalem) for the BBC series of Reith Lectures aimed at demonstrating “that music is at the center of what we are to be called human ".

At the 2007 Salzburg Festival , Barenboim conducted the opera Eugen Onegin (directed by Andrea Breth ). He also worked with the West-Eastern Divan Orchestra in Salzburg and performed with this orchestra at the festival. In 2008 Barenboim received honorary citizenship from the Palestinian Authority for his commitment. In 2009 he conducted the New Year's Concert of the Vienna Philharmonic . On April 16, 2009 Barenboim performed for the first time in Egypt. At the Opera House in Cairo, he led the Cairo Symphony Orchestra , on the program, the 5th Symphony by Ludwig van Beethoven . His appearance was highly controversial in advance for political reasons.

On the occasion of his 70th birthday in 2012, Barenboim founded an academy for young musicians from the Middle East in Berlin, the Barenboim-Said-Akademie (Managing Director Michael Naumann ), which opened at the end of 2015 and began teaching in the 2016/2017 winter semester. Frank Gehry designed a separate concert hall for this academy in the magazine building of the Berlin State Opera (built in 1953/1954 by the architect Richard Paulick ). The federal government supported the intercultural project with 20 million euros . Several donors raised a sum of 17.7 million euros for the expansion and the state of Berlin is making the building available for a symbolic lease of one euro per year for a total of 99 years. The academy's concert hall, named after the composer, conductor and musicologist Pierre Boulez , opened in March 2017.

In 2014, Barenboim again conducted the New Year's Concert of the Vienna Philharmonic . It stood in memory of the First World War and was broadcast to 92 countries.

A concert of the Berlin Staatskapelle under the auspices of the Federal Foreign Minister Frank-Walter Steinmeier under Barenboim's direction in Iran failed in August 2015 because his government “does not recognize the Zionist regime and will not work with artists from this regime”. . The Israeli culture minister Miri Regev had previously sharply criticized Barenboim's performance plans, as Barenboim pursued an anti-Israeli line and abused culture to assert political views.

As a reaction to the awarding of the echo to Farid Bang and Kollegah , whose texts he criticized as misogynistic, homophobic, anti-Semitic and inhumane, Barenboim returned his classical echoes in coordination with the Staatskapelle Berlin and the West-Eastern Divan Orchestra .

Barenboim played the restored grand piano by the composer Franz Liszt in Siena in 2011. This gave him the idea of ​​developing a grand piano according to his ideas with the help of the Belgian piano maker Chris Maene and the Steinway & Sons company . All the strings are stretched in parallel and the grain of the wooden soundboard runs in a different direction, which, according to Barenboim, leads to a more transparent, clearer sound. There are only 2 copies of this grand piano. It was presented on June 16, 2015 at the Ruhr Piano Festival in the Düsseldorf Tonhalle and bears his name in gold letters.

Winner of the Robert Schumann Prize