The Tonhalle Düsseldorf (also New Tonhalle to distinguish it from the war-torn old Tonhalle on Tonhallenstrasse / corner of Schadowstrasse ), formerly Rheinhalle , is a concert hall in Düsseldorf . It is located north of the old town in the Pempelfort district at the beginning of the Rhine promenade and forms the southern end of the Ehrenhof cultural forum . Your foyer, the Green Vault , is one of the most beautiful examples of Expressionist architecture today .

History of the structure

Interior view of the planetarium, before 1928

As early as the 1902 industrial and trade exhibition in Düsseldorf , the location was the southern end of a trade fair and exhibition site. In this special urban development location - on the east ramp of the Oberkassel Bridge , built between 1896 and 1898 - there was a rotunda for the panorama painting Blücher's Rhine crossing at Caub 1814 , a 1800 m² round picture (15 × 120 m) by the Düsseldorf painters Hugo Ungewitter , Gustav Wendling and his assistant Max Clarenbach had created for the industrial, commercial and art exhibition.

The current building was built in 1925/1926 as a multi-purpose hall for the GeSoLei exhibition under the name Rheinhalle and was originally designed so that it could be used as a planetarium . The gold-plated star at the top of the dome and the pairs of sculptures on the staircase to the main courtyard , which symbolize the planets Mars and Jupiter as well as Venus and Saturn , as well as the statue of Pallas Athene , created by Johannes Knubel , as the protector of science and art, point to this , at the driveway to the Oberkasseler Bridge. In the large round hall of the inside of the rotunda, the outer walkway of the foyer, today nine of the eleven gusset pictures created in 1926 hang clockwise from the main entrance: Jankel Adler , Bernhard Gobiet , Arthur Kaufmann , Adolf Uzarski , Heinz May , Carl Cürten , Fritz Burmann , Josef Bell (1891–1935) and Werner Heuser .

The multi-purpose hall was built by the architect Wilhelm Kreis , who for this monumental architecture could have been based on the original Hadrianeum in Rome and on the Projet d'Opéra by Étienne-Louis Boullée . The brick facade of the rotunda, sculpted by buttresses and protruding layers of bricks, which rises on a wide basement floor that can be accessed on a terrace roof, shows a unique expressionistic scale ornament at the top , which contributes to the serious and bulky building an artistically and technically refined overall appearance to give.

After the partial destruction of the Rheinhalle in the Second World War , it was again expanded into a multi-purpose hall during the repairs. From 1976 to 1978 an almost hemispherical concert hall was built under the dome, which had been reconstructed in its original form, by the architecture firm HPP , a replacement for the hall of the old concert hall that was destroyed in the war. The program of events ranges from classical to jazz, chanson and soul to cabaret.

In 2005, when a fire protection and asbestos removal was necessary, a complete redesign was carried out, again by the HPP architecture office . The painting of the large concert hall in the style of the 1970s gave way to a modern ambience in metallic blue. The spatial character of the concert hall is shaped by the round shape of the building, which is also planned as a planetarium, but after intensive model tests behind the now sound-permeable inner dome, sound deflectors were installed that break up the focal point echo of the hemispherical dome , which was previously notorious as a knocking spirit and one of critics and musicians as cause very good acoustics .

The Rheinhalle, then also known as the planetarium and after the renovation by the architects Hentrich-Petschnigg between 1975 and 1977, is now mostly called the Tonhalle, is axially exactly related to the longitudinal axis of the courtyard. The basement floor, which is square in plan, has a roof plateau and is connected to the bridge ramp on its south side. The side length is about 85 meters. The northern main entrance opens up to the longitudinal axis of the entire complex with a two-flight staircase ramp. The inner round building has a diameter of 36 meters and a clear height of 30 meters. The dome, clad on the outside with sheet copper, is supported on the inside by 16 “thin disk” concrete supports. The concrete-iron construction has an iron dome under which a shell-shaped shell was hung. A second, canvas-covered inner dome could be pulled up 4 meters. This meant that the Rheinlandhalle could not only be used as a meeting room, but also as a planetarium. The building was clad with a system of 48 brick buttresses. There are high lancet windows between the struts used. The wall surface of the rotunda shows a strong formation of details, broken down into various diamond-shaped patterns, protruding and recessed brick layers and graduations. In the design of these facade details, Wilhelm Kreis' mastery in the use of brick becomes very clear and this quality remains unique in Düsseldorf. The pillar structure of the dome building is taken up by the square basement. The wall surface is broken up by the narrow buttresses. A “temple-like pavilion” with three-axis rectangular openings made of tuff stone adjoins the courtyard to the left and right of the outer corners of the base building.

Tonhalle of the Oberkassel Bridge seen from

The Tonhalle comprises a large hall with 1854 seats, a chamber music hall with 300 seats and a rotunda in the foyer with 200 to 400 seats depending on the event.

The large concert hall is located directly under the dome. At its zenith is the ceiling object with 21 concave mirrors by Adolf Luther . Light works of art with light emitting diodes and a special lighting concept are intended to symbolize the Tonhalle as a “music planetarium”.

In the center of the rotunda is located Stalaktitenfeld by Günther Uecker , a light sculpture, which moves slowly up and down.

Around 300 concerts with over 300,000 visitors take place every year. In the "Green Vault", the former foyer of the Rheinhalle , glass works of art etc. a. from the collection of the architect Helmut Hentrich shown as a permanent exhibition.

The Tonhalle is connected to the light rail and thus to the Düsseldorf local transport network via the Tonhalle / Ehrenhof underground station named after it . A roof terrace and a staircase on the north side of the Tonhalle connect the northern pedestrian crossing of the Oberkasseler Bridge with the courtyard and the courtyard garden . A pedestrian tunnel under the Joseph-Beuys-Ufer street creates a direct connection between the entrance in the corner pavilion of the Tonhalle and the parking lot at the Untere Werft on the banks of the Rhine.

The organ was built in 1978/79 by the organ builder Johannes Klais (Bonn) . The slider chests -instrument has 28 registers on two manuals and pedal. The game actions are mechanical, the stop actions are electric. 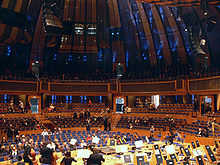 Formerly the Great Hall, since 2014 the Mendelssohn Hall

Dome over the Mendelssohn Hall 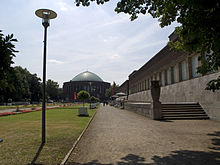 Tonhalle and Forum NRW at the Ehrenhof

After Düsseldorf's musical culture first flourished under the Electors Philipp Wilhelm and Johann Wilhelm , who brought the best musicians of their time such as Arcangelo Corelli and Georg Friedrich Handel to the Düsseldorf court, after the death of Johann Wilhelm in 1716, the city's musical life came to a standstill.

With the emergence of bourgeois music culture at the beginning of the 19th century, music-loving citizens in Düsseldorf came together to form the municipal music association and particularly cultivated oratorical music. In 1818 the first sound hall with excellent acoustics was built on Flinger Straße (today the location of the Karstadt department store on the corner of Schadowstraße and Tonhallenstraße). In 1863 the city of Düsseldorf decided to buy the “Tonhalle” in order to give its citizens an attractive and representative concert hall. A year later, the city hired the musicians who had previously been loosely engaged and founded the Düsseldorf Symphony Orchestra . This made Düsseldorf the second German city after Aachen to have a permanent orchestra. Names like Felix Mendelssohn Bartholdy , Robert Schumann , Johannes Brahms , Gustav Mahler , Richard Wagner and Richard Strauss are associated with the Tonhalle and its orchestra. From 1880 to 1892 the Tonhalle was rebuilt under the same name and at the same location; the Kaisersaal offered 3,000 seats and in 1912 provided the setting for the second performance of Gustav Mahler's 8th Symphony .

The Second World War seemed to put an end to this tradition. In 1942 the old concert hall was destroyed by bombs. In 1944 the orchestra was disbanded and the musicians were sent to war-important operations. After the war, concerts were resumed in July 1945 with 45 musicians. The number of general music directors who have headed the Symphoniker since 1945 includes well-known conductors such as Eugen Szenkar , Jean Martinon , Rafael Frühbeck de Burgos and, with the 2000/2001 season, music director (GMD) John Fiore . Andrey Boreyko has been GMD of the Düsseldorfer Symphoniker since the 2009/2010 season. Michael Becker has been the artistic director of the Tonhalle Düsseldorf and the Düsseldorfer Symphoniker since 2007 .

It was not until 1979 that the city was able to keep its promise of a center for concert music. Among other things, this was thanks to the architect Helmut Hentrich, who brought the conversion of the Rheinhalle into discussion.

Many famous musicians made the Tonhalle sound, such as B. Yo-Yo Ma and Lang Lang . But famous orchestras such as the London Symphony Orchestra are also regular guests in the Tonhalle.

On the occasion of the 150th anniversary of the Düsseldorf Symphony Orchestra, the Great Hall of the Tonhalle was renamed the Mendelssohn Hall as part of a concert ceremony on February 7, 2014 in honor of the former city music director Felix Mendelssohn Bartholdy .