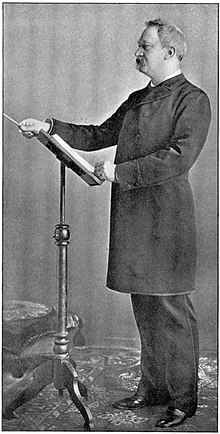 Theodore Thomas was a son of Johann August Thomas, who worked as a town musician in Esens, and was taught how to play the violin by his father from an early age. He showed an extraordinary talent for this, so that he was able to perform publicly as a violinist for the first time at the age of five. At the age of nine he was even invited to audition for the King of Hanover. In 1845 he moved with his parents to the United States and obtained his education mainly self-taught.

Together with his father, Thomas played violin pieces at concerts in New York City for two years . Both then worked as horn players on a warship for about a year. Thomas joined an Italian opera company and toured several major US cities. In 1850 he studied the art of conducting in New York with Karl Anton Eckert and Louis-Antoine Jullien . He then became first violinist in the orchestra that accompanied Jenny Lind in the same year , Henriette Sontag in 1852 and Giulia Grisi and Giuseppe Mario in 1854 . He also directed the orchestras that went on tour through the country with Anna de La Grange , Marietta Piccolomini and Sigismund Thalberg .

From 1855 Thomas belonged to the Mason Thomas Quintet , of which he was the youngest member. William Mason acted as pianist, while Thomas as first violinist, Joseph Mosenthal as second violinist, George Matzka as viola player and Carl Bergmann as cello player formed a string quartet. The musicians held chamber music soirées at Dodworth Hall in New York until 1868 . At their first appearance in November 1855 they played a. a. Schubert's string quartet Death and the Maiden and Brahms' Piano Trio No. 1, Op. 8. Their high level of playing and their repertoire aroused admiration in Europe and America; and this made Thomas better known.

In 1864 Thomas married Minna L. Rhodes and had three sons and two daughters with her. From 1864-78 he performed a series of symphony concerts at Irving Hall, New York City. In 1866 he began his summer night concerts in Terrace Garden, which then continued in Central Park . 1869–91 he undertook many concert tours through American cities with the Theodore Thomas Orchestra, which he founded . He popularized Richard Wagner's music in the United States and founded the New York Wagner Union in 1872 . He also organized the choir society that gave a Wagner memorial concert after the composer's death (1883). For more than 30 years, namely from 1873 to 1904, he conducted the biennial May Festival in Cincinnati . In 1877 he was director of the New York Philharmonic , 1878/79 director of the newly established Cincinnati College of Music and then from 1879 to 1891 again music director of the New York Philharmonic, which he helped to flourish. The Yale University appointed him in 1880 an honorary doctorate of music. In 1882 he began a much-noticed choral orchestra project in New York, in which 3,000 choir members sang to the accompaniment of a 300-piece orchestra; all seven concerts were attended by around 8,000 listeners. 1886-87 he conducted the American opera company.

After the death of his first wife (1889) Thomas went on May 7, 1890 in Chicago a second marriage with the writer Rose Emily Fay (1853-1929). In 1891 he enthusiastically agreed to the proposal of the businessman Charles Norman Fay to found a permanent orchestra in Chicago. Here he was able to rely on the support of Chicago business people. From 1891 until his death in early 1905 he was the first music director of the Chicago Symphony Orchestra . He never returned to his homeland and, having premiered hundreds of works by 146 composers with his orchestras in America, died on January 4, 1905 at the age of 69 in Chicago.

A street and a school auditorium were named in his honor in the town of Esens. In the Theodor-Thomas-Straße there is a memorial plaque at the location of his birthplace.