Kurt Masur at the desk of the Dresden Philharmonic (December 2012)

Kurt Masur (born July 18, 1927 in Brieg , Lower Silesia , † December 19, 2015 in Greenwich , Connecticut ) was a German conductor . From 1970 to 1996 he was Gewandhauskapellmeister in Leipzig, from 1991 to 2002 music director of the New York Philharmonic and from 2000 to 2007 chief conductor of the London Philharmonic Orchestra . In addition to his musical work, he is also known for his political commitment, particularly during the Peaceful Revolution in Leipzig - as one of the Six in Leipzig on October 9, 1989.

Kurt Masur was the son of an electrical engineer who ran a specialist electrical shop. Kurt Masur completed his training as an electrician; at times he worked in his father's company. He said of himself that he enjoyed practical work very much.

His older sister's piano lessons aroused his interest in playing the piano. At the age of 10 he received piano lessons from the second organist of the Brieger Church, and he began to play the organ. From 1942 he studied piano and cello for two years at the Landesmusikschule Breslau . At the age of 16, he received the medical diagnosis that the little finger of his right hand could no longer be stretched, which ruled out a career as a pianist. So the decision matured to conduct instead. In 1944/45 he was called up for military service with the paratroopers .

After his return he studied from 1946 to 1948 at the Leipzig University of Music - Mendelssohn Academy piano with Sigfrid Grundis , Fritz Weitzmann and Franz Langer , composition and orchestral direction with Heinz Bongartz and Kurt Soldan , but dropped out. That's why he later called himself an "amateur".

Masur was married to Brigitte Stütze for the first time until 1966. They had already met in Silesia and together they had three children, two sons and a daughter. In 1966 his daughter Carolin was born, whose mother, the dancer Irmgard Elsa Kaul (* 1938), he married in 1971. She died in 1972 in a car accident in which Masur was behind the wheel and which claimed two more lives. The exact circumstances of the accident remained unclear as there are different versions of what happened. In his third marriage, he was married to the Japanese violist and soprano Tomoko Sakurai since 1975 . The son Ken-David (* 1977), who is a conductor, comes from this marriage. Masur has a total of five children. 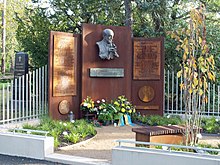 The grave of honor for Kurt Masur (November 2017)

On October 10, 2012, it was publicly announced that Kurt Masur had been suffering from Parkinson's disease for several years .

After several falls (April 2012 and February 2013) Masur only appeared rarely; most recently he conducted while sitting in a wheelchair. Kurt Masur died in hospital in Greenwich, Connecticut, USA on December 19, 2015 at the age of 88. After a public memorial service to the St. Thomas Boys Choir and 28 musicians from the Gewandhaus Orchestra under the direction of Gotthold Schwarz in Leipzig's St. Thomas Church Masur urn was on January 14, 2016 close family in the Division II of the Leipzig crematorium and the cemetary buried. A memorial concert took place in the Gewandhaus on April 16, 2016. In his memory, Kurt-Masur-Platz was named after him on September 8, 2017 in Leipzig . In November 2017, his family erected a tomb for him on an honorary grave site in Leipzig. The design of the tomb with a bust in the middle comes from Markus Gläser . The bust shows Masur in his typical hand position while conducting .

Kurt Masur shaped Leipzig's musical life as the Gewandhaus Kapellmeister for almost thirty years . After completing his studies, from 1948 to 1951 he was the solo repetitor and conductor at the Landestheater Halle an der Saale . After working as first conductor at the Erfurt Municipal Theaters (1951–1953) and the Leipzig Municipal Theaters (1953–1955), he became conductor of the Dresden Philharmonic in 1955 . From 1958 to 1960 he was musical director at the Mecklenburg State Theater in Schwerin and from 1960 to 1964 at the Komische Oper Berlin . From 1964 to 1967 he made guest appearances in various European countries and in Brazil ; from 1967 to 1972 he was chief conductor of the Dresden Philharmonic.

On October 9, 1989, the day of the Leipzig Monday demonstrations , Masur was one of the six prominent Leipzigers (alongside the secretaries of the SED district leadership Kurt Meyer, Jochen Pommert and Roland Wötzel , the cabaret artist Bernd-Lutz Lange and the theologian and Stasi employee Peter Zimmermann) who made the call No violence! composed. This appeal was broadcast several times over the loudspeakers of the Leipzig city radio during the demonstration and contributed significantly to its peaceful course. On December 27, 1989, Masur became the first honorary citizen of Leipzig after the fall of the Berlin Wall . In 2014, Masur received the Golden Hen in the “Politics” category for his involvement in the Peaceful Revolution .

From 2004 to 2013, Kurt Masur was CEO of the Beethoven House in Bonn. Here he introduced the annual master classes for young artists in 2006.

Honors were awarded to Masur at an early stage: the GDR awarded him the Leipzig Art Prize and three times the National Prize (1969/1970/1982). In 1975 he was appointed professor at the Leipzig University of Music "Felix Mendelssohn Bartholdy" . In 1984 he was awarded an honorary doctorate from the University of Leipzig . On January 26, 1990, Masur was one of the founders of the Leipzig Cultural Foundation and was elected its first President (until 1995). In 1994 he became a board member of the German National Foundation . Masur was a member of the Saxon Academy of Arts and the Academy of Arts Berlin . In 2003 he was made an honorary member of the " Beethoven House Association ". His legacy is administered by the International Kurt Masur Institute in Leipzig.

Masur's work included a rich repertoire; his best-known recordings include the works of Bruckner , Dvořák , Liszt , Mendelssohn , Prokofiev and Tchaikovsky, as well as the nine symphonies by Beethoven . He played the latter several times with the Gewandhaus Orchestra . There are also recordings of Bach , Brahms , Britten , Bruch , Cerha , Debussy , Mahler , Shostakovich , Schubert , Schumann and Sibelius of Masur ; but also by Gershwin , whose works he published on record in 1975 .

Together with Annerose Schmidt he recorded all of Mozart's piano concertos ; together with Emil Gilels and the State Symphony Orchestra of the USSR, Beethoven's piano concertos. He recorded the Brahms Violin Concerto with both Yehudi Menuhin and Anne-Sophie Mutter and also accompanied Mother in works by Beethoven and Mendelssohn. Masur also gave concerts with Cyprien Katsaris , Hélène Grimaud and Helen Huang.

He recorded Mussorgsky's pictures at an exhibition several times in the lesser-known orchestration by Sergei Gorchakov .

Under the direction of Masur and the operas Fidelio (Beethoven), Ariadne auf Naxos (Strauss) and Genoveva by Robert Schumann added. For the German Television also was Walter Felsenstein 's production of Giuseppe Verdi's Othello recorded in Masur as musical director held.

The International Kurt Masur Institute has been based in the Mendelssohn House in Leipzig since November 2017 .

Chief Conductor of the Dresden Philharmonic

Winner of the Robert Schumann Prize