pictures of an exhibition 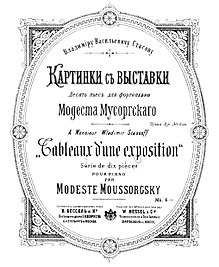 The piano cycle "Pictures at an Exhibition" - memories of Viktor Hartmann ( Russian "Картинки с выставки" - Воспоминание о Викторе Гартмане transcribed kartinki s wystawki - wospominanije o Wiktore Gartmane ) is a composition by Modest Mussorgsky in 1874, commonly referred to as a prime example of program music is seen. The individual sentences describe paintings and drawings by his friend Viktor Hartmann , who died the year before , which Mussorgsky had seen at a memorial exhibition. The work was created at the suggestion of a mutual friend, the art critic Vladimir Stasov . He was also involved in the naming of the pieces and the cycle was dedicated to him.

The richness of the timbres prompted other composers to work on the work for orchestras and other instrumental groups as well. The most famous arrangement is that of Maurice Ravel .

The original title is noted in the left column, next to it is the German title or the direct translation. In the right column there are alternative names for the sentences.

The work gives the impression of a tour of an exhibition of Hartmann's works.

Before the part Con mortuis in lingua mortua, there is the following note in the autograph by Mussorgsky: “The Latin text is: with the dead in a dead language. What does the Latin text mean? - The creative spirit of the late Hartmann leads me to the skulls and calls on them; the skulls light up gently. ”In the music, Mussorgsky himself seems to invoke the skulls: against the background of a shimmering tremolo in the treble, a minor variant of the promenade theme sounds alternately in the middle position (invocation) and in the dark bass region (answer from the realm of the dead). With seemingly mystical chords, the piece fades away, immersed in the ubiquitous tremolo that is left alone in the end and whose ever quieter fading - if it is to happen without holes and dynamic outliers - is also one of the pianistic problems with which the entire cycle is richly peppered is. 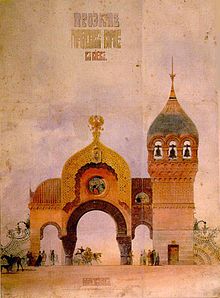 Architectural design by Viktor Hartmann for a Kiev city gate with a bell tower and a small church inside from 1869, which after his death was the inspiration for Modest Mussorgsky's 10th movement "The Heroes' Gate (in the old capital Kiev)" of the piano cycle Pictures from an exhibition from 1874 was.

The relationship to the original images

The main reason for Mussorgsky's composition was the memorial exhibition for Viktor Hartmann, which took place in February and March 1874 at the Academy of Arts in St. Petersburg. It is difficult to clarify, not least in view of the difficult source situation for Viktor Hartmann's pictures, many of which have been lost, whether there actually ever existed original images for all of the movements or whether some of the images perhaps sprang directly from Mussorgsky's imagination. There is no template for the connecting promenade ; Here Mussorgsky simply characterizes strolling through the exhibition in changing moods, in which the previous motif has an effect or the emerging one casts its shadow in advance.

Corresponding pictures by Hartmann have not been preserved for all of the sentences in “Pictures at an Exhibition”. Only three of the pictures that Mussorgsky set to music can be documented in the exhibition of 1874: the “Ballet of the unhatched chicks” (a costume design for the ballet Trilbi by the composer Julius Gerber and the choreographer Marius Petipa ), “The Hut on Chicken Feet (Baba-Jaga ) ” (A design drawing for a bronze clock) and “ The Great Gate of Kiev ” (an architectural design not carried out). However, since the exhibition was expanded to include loans even after it began, it is no longer possible to determine the exact size of the exhibition afterwards.

Two separate pencil drawings by two Jews that were in Mussorgski's private possession and have been lost, but of which one variant has been preserved as a watercolor , can be identified as a template for “'Samuel' Goldenberg and 'Schmuÿle'” . There is also a picture of Hartmann's catacombs in Paris . Whether this actually served as a template for the sentence Catacombae (sepulc [h] rum romanum) remains speculative. A Roman tomb, as indicated in the title, is not shown in Hartmann's picture.

Recording of the original manuscript

In 2014 the Russian pianist Andrej Hoteev released a new CD recording of “Pictures at an Exhibition” based on original manuscripts from the Russian National Library in St. Petersburg, which, according to his research, contains numerous significant deviations from other music editions. In the CD booklet, the most important deviations are clearly documented using illustrations from the manuscripts. The press describes the impression of the expressive power, the dynamism, the richness of colors and the intensity of the original.

Recording of the composer's manuscript version

In 2010 the German pianist Lars David Kellner published the piece “Gnomus” in the manuscript version of the composer on his Mussorgsky CD (first recording). The complete “Pictures at an Exhibition” was premiered in 2011 by Kellner in their original version. The differences between the first version and the final version concern “Gnomus” as well as “The Baba-Yaga Hut” and “The Great Gate of Kiev”.

It is often noted that this piano cycle calls for an orchestral version, and the versions are correspondingly diverse. As a result, other edits were not lacking.

Recordings of the orchestral versions (selection)

Instrumentation for the orchestral version by Maurice Ravel

Commons : Pictures at an Exhibition  - Album with pictures, videos and audio files