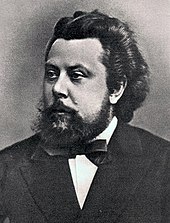 Modest Mussorgsky ( Russian Модест Петрович Мусоргский ., Scientific transliteration Modest Petrovich Mussorgsky ; emphasis: Modest Petrówitsch Mussorgsky ; * 9 . Jul / 21st March  1839 greg. In Karewo , Ujesd Toropets , Pskov Governorate , Russian Empire ; † 16 jul . / March 28,  1881 greg. In Saint Petersburg ) was a Russian composer. He was mainly known for his operas and the piano cycle Pictures at an Exhibition and is considered one of the most independent Russian composers of the 19th century . He died at the age of 42 as a result of years of alcohol addiction . Many works that had been started remained unfinished.

Born as the youngest son of a wealthy landowner, Modest Mussorgsky learned to play the piano from his mother and a German teacher. At the age of seven he had already mastered short pieces by Franz Liszt and at the age of nine he played a John Field concert in front of a large audience in his parents' house . In August 1849 he began piano lessons with Anton Herke, a student of Adolf Henselt , and was a student at the renowned Petri School . 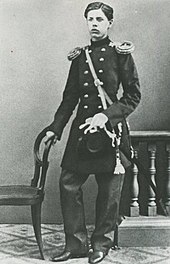 Mussorgsky during his time at the cadet school, around 1856

In 1852 he entered the cadet school in St. Petersburg, where he was particularly concerned with history and philosophy. He was also a member of the school choir there, and at the suggestion of his religion teacher, Father Krupski, he also dealt with Bortnianski and other Russian church music of the early 19th century. At this time his first composition appeared: "Porte-enseigne Polka", which was dedicated to his classmates and was printed at his father's expense. In 1856 he left the cadet school and joined the Preobrazhensky Guard Regiment . Through Dargomyschski and César Cui he got to know Mili Balakirew , from whom he received his first formal instruction in music theory, which was essentially based on the great works of Ludwig van Beethoven , Franz Schubert and Robert Schumann . After a crisis he left the regiment on July 17, 1858, but continued to work with Balakirev.

A visit to Moscow in the summer of 1859 moved him deeply and, in his own estimation, made him from a cosmopolitan to a Russian. The revocation of serfdom in 1861 led his family into trouble, so he spent the next two years in the country helping his two brothers manage the family estate in Karewo. However, financial difficulties soon forced him to place himself in the tsar's administrative service. In 1863 he was appointed to the engineering department of the Ministry of Communications. After a promotion in December 1866, he was released on May 10, 1867. After the publication of Chernyshevsky's novel What to do? new ideas had become popular in Russia, and during this time Mussorgsky lived in a " commune " with four other young men: Mili Balakirew , César Cui , Alexander Borodin and Nikolai Rimsky-Korsakov , where he enjoyed a lively exchange of ideas about art , Philosophy and politics involved. The group was ironically referred to as The Mighty Heap or the Group of Five .

Except for Balakirev, all were music lovers, not professional musicians. They fought against academic professionalism. They wanted to create something new out of the people of Russia, deliberately as amateurs. This movement broke up because the bourgeoisie showed no understanding for it. Apart from these external, social influences, Mussorgsky's mother died in 1865, which triggered a massive phase of alcohol abuse in him - his Buder Filaret took him out of the “commune” under duress and let him live with him in the country.

There Mussorgsky was particularly concerned with orchestral works. The first version of his symphonic poem, A Night on Bald Mountain, dates from this period . After returning to St. Petersburg, he began to compose the opera Boris Godunov based on a play by Pushkin . On January 2, 1869, he returned to the civil service, this time within the forestry department of the Ministry of State Property. In secure circumstances, he made rapid progress with the writing of the opera and completed the manuscript in December of the same year. Rejected by the Mariinsky Theater , he revised the play again drastically until July 1872, but this time too it was unsuccessful. However, three scenes of his work were presented with great success at a benefit event on the initiative of some singers. This ultimately led to the fact that the directorship of the Mariinsky Theater no longer stood up, so that on February 8, 1874, Boris Godunov could have its world premiere . At this time Mussorgsky began to drink heavily; he saw symptoms of dementia in himself. Nevertheless, he was promoted further in his ministry career for the time being.

In June 1874 he wrote the piano cycle Pictures at an Exhibition , which was inspired by an exhibition of drawings and stage designs by his late friend Viktor Hartmann . At the same time the song cycle Without Sun was created based on poems by Golenishchev-Kutuzov . 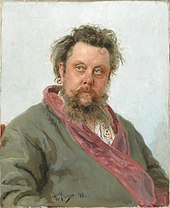 Portrait of Mussorgsky shortly before his death, painted by Ilya Repin in 1881

Between March and April 1877, another series of songs was written based on poems by Alexei Konstantinowitsch Tolstoy , which for the first time illustrated his new compositional technique, in which lyrical singing and a declamatory recitative-like language unite.

In 1878 Mussorgsky moved from the forestry department to the auditing department, where he found an understanding superior in T. Filipov, who among other things gave him room for a three-month concert tour with the contralto Daria Leonova to the Ukraine , the Crimea and cities on Don and left Volga .

On January 13, 1880, Mussorgsky had to leave the civil service because of his drunkenness, but was granted a pension of 100 rubles on the condition that he should finish his half-finished opera Khovanshchina . Both Khovanshchina and the comic opera The Sorochinsy Fair were not completed.

In the last year of his life he lived partly with Daria Leonowa on her estate. For her he worked as a companion and theory teacher in the music school she founded in St. Petersburg. On February 23, 1881, Mussorgsky visited Leonova again in a desperate mood. According to her, he believed that due to his desperate financial situation, there was nothing more he could do than beg. After a seizure that evening and three more the following day, he was admitted to Nikolayevsky Hospital on February 26th. After an apparent recovery in mid-March, during which Repin painted his famous portrait, Mussorgsky died on the 28th of the same month. He is buried in the Tikhvin cemetery of the Alexander Nevsky Monastery in St. Petersburg. The Mussorgsky Peaks , two mountains on Alexander I Island in Antarctica, have been named in his honor since 1961 .

In the last year of his life, Mussorgsky wrote an autobiographical sketch which, although it shows inaccuracies in many points, ends with a very clear statement on his artistic position:

Mussorgsky cannot be classified in any existing group of musicians, be it according to the character of his compositions or according to his musical views. The formula of his artistic "creed" can be explained by his view of the function of art: art is a means of communication with people, not an end in itself. This guiding principle defines all of his creative activity. Based on the conviction that human speech is strictly controlled by musical laws ( Virchow , Gervinus ), he sees the function of art in musical tones not so much in the generation of feelings, but primarily in human speech. In recognition of the fact that in the field of art only artist-reformers such as Palestrina, Bach, Gluck, Beethoven, Berlioz and Liszt created the laws of art, in his opinion these laws are not immutable, but can change and develop, like everything else in the inner world of man.

Most of Mussorgsky's works were unfinished at his death and were edited and "corrected" after his death by his friend Rimsky-Korsakov , according to the opera Khovanshchina . The important piano work Pictures at an Exhibition has been orchestrated by several other composers; the most famous version comes from Maurice Ravel .

Gravestone in the Tichwiner Friedhof

Mussorgsky was immortalized on a modern Russian coin (made of palladium ).

In 1987 the Saarländischer Rundfunk broadcast a staged film version of the song cycle “Kinderstube” with the singer Trudeliese Schmidt under the title “Tell me, Nanjuschka” . Director: Hans Emmerling, Producer: Peter Rocholl .

In 2011 the choreographer Wang Xinpeng and the dramaturge and writer Christian Baier designed the fairy tale ballet Fantasia - Awake in your dream (premier ballet Dortmund 2011) based on music by the composer.