Ilja Repin is a redirect to this article. For the ship of the same name, see Rugard (Schiff, 1927) . 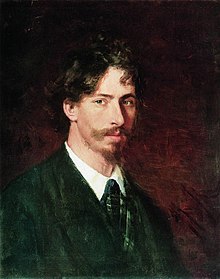 Repin was born the son of a military settler. After attending the military topography school, he trained as an icon painter from 1857 to 1863 . He then studied at the Academy of Arts in Saint Petersburg . During a trip to the Volga, which he made with painter friends in 1870, he found the motif for what is perhaps his most famous painting, The Volga Treidler . In the following year he graduated from the academy with flying colors and received a five-year scholarship abroad for his thesis . He made friends with the critic Vladimir Stassow and got to know the composers Modest Mussorgsky , Nikolai Rimski-Korsakow and Alexander Borodin in his salon . In 1872 he married Vera Schewzowa and joined the artist group of Peredwischniki (German hikers ). 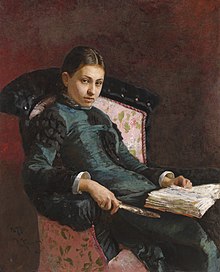 His scholarship took him to Paris via Vienna and Italy in 1873 . There he dealt with Impressionism and met Édouard Manet . However, his contribution to the Paris Salon of 1875, Pariser Café , received no attention. When he was unable to achieve success the following year either, he returned to Russia disappointed two years before his scholarship expired and decided to devote himself to Russian topics from now on.

In the following years he dealt with the subjects of Russian history, but also with contemporary topics. In 1879 he painted, for example, The Arrest of the Propagandist . One year later, the first large-format version of The Zaporozhian Cossacks are writing a letter to the Turkish sultan . Repin got to know and appreciate Leo Tolstoy , whom he also painted several times. In 1881 he created several portraits of important contemporaries (including the dying Modest Mussorgsky). First studies of his monumental works The Cross Procession in the Kursk Governorate and Ivan the Terrible and his son on November 16, 1581 were created during this time.

The patron Pawel Michailowitsch Tretyakov , collector and namesake of today's Tretyakov Gallery in Moscow , was one of Repin's clients for portraits. After moving from Moscow to St. Petersburg, Repin separated from his wife Wera in 1882, but the two remained on friendly terms.

Between 1882 and 1899 Ilya Repin made several trips through Europe, deep into Siberia , the Crimea and the Orient . In 1896 he received a small gold medal at the International Art Exhibition in Berlin . He was considered a leading Russian painter of his time and was by Tsar Alexander III. commissioned to reform the academy in St. Petersburg, where he also taught as a professor from 1892 . He portrayed Maxim Gorky and became a member of the French Legion of Honor in 1901.

In 1900 he entered into a civil marriage with the Russian writer Natalia Nordman . In 1903 he settled on his wife's country estate in Kuokkala, Finland . In her Villa Penaten ( Repino ) she had a studio set up for him, and there he found his new center of life. Nordman died in 1914 and bequeathed the Penates to him .

Under the influence of Tolstoy, Repin had been a vegetarian since around 1891. During his marriage to Natalia Nordman, his vegetarianism became even stricter, so that he avoided almost all foods of animal origin. He kept this way of life, at least for the most part, even after her death.

On behalf of the government, together with his students Boris Kustodijew and Iwan Kulikow, he painted the historical painting Festival of the Council of State on May 7, 1901, the centenary of its foundation in 1903 . The 40 or so portrait studies that Repin created in this context form an outstanding group within his work. At that time the artist was plagued by a right hand that was almost paralyzed by rheumatism . He therefore often emphasized that he had painted the entire Council of State with the left.

After the Russian defeat in the Russo-Japanese War in 1905, riots broke out in Russia. The brutal suppression of a peaceful demonstration on Petersburg Bloody Sunday (9 jul. / January 22, 1905 greg. ) Inspired Repin to paint critical pictures Bloody Sunday and Red funeral . Repin withdrew from teaching and worked together with Tolstoy against the death penalty. He visited Rome again in 1911 and Marianne von Werefkin and Alexej Jawlensky in Munich . He then wrote his memoirs in Kuokkala. With the First World War and the Russian Revolution , the borders changed and Kuokkala belonged to independent Finland. Repin was a Finnish citizen from 1918 . His interest as a painter turned to biblical subjects. He enjoyed a great reputation even after the establishment of the Soviet Union . On September 29, 1930 Ilya Repin died on his country estate and was buried there. After the winter war of 1940, the area became Russian and is now part of Leningrad Oblast .

In his pictures Repin mainly depicts the life of the Ukrainian and Russian people and denounces social grievances. His later works are devoted to historical representations and portraits of famous Russian composers such as Michail Glinka and Modest Mussorgsky , writers such as Ivan Turgenew and fellow Russian painters.

His works are considered a model of Soviet socialist realism , in which, however, Repin's mastery was hardly ever achieved. His snapshots combine psychological moments, such as the surprise of faces when an exile returns unexpectedly with the virtuoso play and the colors of light that Repin brought to Russian painting from his exploration of impressionism.