A night on the bare mountain 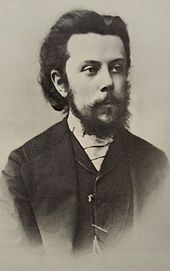 A night on Bald Mountain , played by the Skidmore College Orchestra

Mussorgsky describes the dance of the witches in the St. John's Night (from 23 to 24 June), on the Lyssaja gora ( "Bald Mountain"), a place of Slavic mythology, similar to the Blocksberg as a gathering of witches is true. There are several mountains in the Slavic-speaking area called Lyssaja gora / Lysá hora / Łysa Góra ; it is not known, however, that Mussorgsky was referring to a specific mountain in his composition. In the score of the original version of 1867 Mussorgsky listed several programmatic subheadings: Сбор ведьм, их толки и сплетни ( "gathering of witches and their chatter") - Поезд Сатаны ( "Satan train") - Чёрная служба ( Messe noire ) ( "glorification of Satans ") - Шабаш (" (witch) sabbath ").

The adaptation of Rimsky-Korsakov (cf. Genesis ) deviates from Mussorgsky's original program in that the final Witches' Sabbath is greatly shortened, but at the height of the Sabbath celebration the bell of a village church sounds in the distance, which drives away the spirits of darkness.

The work has a multi-level and confusing genesis, which led to some misunderstandings in the reception.

None of these versions were performed publicly during the composer's lifetime.

After Mussorgsky's death it took Nikolai Rimsky-Korsakov, the St. John's Eve to bring as well as other works Mussorgsky into a sideshow mature form. Rimsky-Korsakov stated, however, that this work was particularly difficult; For two years he had not found a satisfactory form. He finally described his version as “completed and orchestrated”, which is misleading inasmuch as the 1867 version was a complete and orchestrated score by the composer. Rimsky-Korsakov based his adaptation mainly on Mussorgsky's final version from The Sorochintsy Fair . He shortened Mussorgsky's end of the Witches' Sabbath and added the following scene from the fair instead , which rings in the end of the haunted with a bell and brings the work to a peaceful morning mood. Thus, Rimsky-Korsakov's version ultimately represents an independent work, which is compiled as a pasticcio from several works by Mussorgsky and has only partially to do with his conception.

Rimsky-Korsakov's version was premiered under his direction on October 27, 1886 with great success in Saint Petersburg. On June 28, 1889, he presented his version at the Paris World Exhibition , which also began the international success of the work.

Mussorgski's original score was rediscovered in the 1920s and premiered on February 3, 1932 in London under the direction of Nikolai Malko . In 1968 the original score also appeared in print. Although this version has since been recorded by important conductors such as Claudio Abbado and Valeri Gergijew , and Rimsky-Korsakov's version is viewed by many musicologists as a “falsification”, the latter version continues to prevail on international concert stages to this day.

Later arrangements for orchestra by Leopold Stokowski , Gottfried von Eine and Wissarion Schebalin appeared . The entire piece was adapted by Isao Tomita in 1974 on the Firebird Suite album . The star combo Meißen recorded an adaptation for keyboard and percussion in 1977. The progressive metal - band Mekong Delta played the piece for her album Dances of Death (and Other Walking Shadows) in a rock band , a duty system. In 2014, the Austrian music publisher Doblinger published an organ arrangement by the Danish organist Erik Kolind.

Reception in film and games

Even Walt Disney has the music of this work in the processing of Leopold Stokowski as part of its animated film Fantasia implemented in concise scenes. The work is also quoted several times in the feature film Jabberwocky by the two former Monty Python members Terry Gilliam and Michael Palin . An adaptation of the piece can be heard in the English horror film Asylum - Maze of Schreckens (1972). It was also used, along with other works by Mussorgsky, as background music for the computer game Frontier: Elite 2 .

A shortened version of the piece was used for the boss character Chernabog in the action role-playing game series Kingdom Hearts at the end of the world. The song was later used again in Kingdom Hearts 3D: Dream Drop Distance . The music is a slightly modified version from the movie Fantasia .

The beginning of the piece is played in the prison massacre in the film Natural Born Killers .

Commons : A Night on Bald Mountain  - Collection of Pictures, Videos and Audio Files