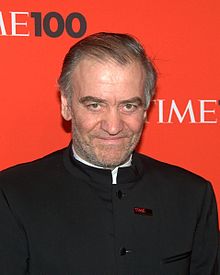 Valery Gergiev ( Russian Валерий Абисалович Гергиев ., Scientific transliteration Valery Gergiev Abisalovič , Ossetian Гергиты Абисалы фырт Валери Gergity Abisaly fýrt Valeri ; * 2. May 1953 in Moscow ) is a Russian conductor and artistic director . He comes from a family from the then North Ossetian Autonomous Soviet Socialist Republic , today's Caucasus Republic of North Ossetia-Alania . He has been chief conductor of the Munich Philharmonic since 2015 .

Gergiev grew up in the Caucasus and received his first piano lessons in Vladikavkaz , then Ordzhonikidze. As a gifted youngster, he studied conducting with Ilya Mussin at the Rimsky-Korsakov Conservatory in Leningrad . As a student at the Conservatory, he won the Herbert von Karajan Conducting Competition in Berlin in 1977 .

From 1977 he worked as a conductor at the Kirov Theater in Leningrad. From 1981 to 1985 he was director of the Armenian State Orchestra and in 1988 he became artistic director of the Kirov Opera. Since 1996 he has been director of the theater, which has been renamed the Mariinsky Theater again since the political change .

Under his directorship, contacts were established with the world's leading opera houses, and the Mariinsky Theater became one of the most renowned representatives of Russian culture. Gergiev's work is primarily focused on promoting Russian operas abroad. His international success began in 1989 at the Schleswig-Holstein Music Festival and with the Rotterdam Philharmonic Orchestra, of which he became chief conductor in 1995. Since 1997 he has conducted regularly at the Metropolitan Opera in New York. His many activities include the establishment of various festivals in Finland, Rotterdam and St. Petersburg.

With the ensemble of the Mariinski Theater he has made guest appearances at major festivals, such as the 2004 Salzburg Festival or, from 2003, in the Festspielhaus Baden-Baden , where he performed Richard Wagner's Der Ring des Nibelungen . In October 2008 he made a guest appearance with the Mariinsky Ensemble at the Dortmund Konzerthaus , including a concert performance of the opera Turandot by Puccini. From 2007 to 2015 Gergiev was chief conductor of the London Symphony Orchestra .

In autumn 2013 Gergijew founded the Russian-German Music Academy together with the musicologist Tatjana Rexroth , which aims to intensify the exchange between young talents from both countries. On July 10th and 11th, 2014, the academy's first appearance with young musicians from the Mariinsky Theater St. Petersburg, the Berlin University of the Arts and the “Hanns Eisler” University of Music in St. Petersburg took place under his direction .

Through his work, Gergiev not only brought Russian operas closer to an international audience, but also protagonists of his theater such as the soprano Anna Netrebko , with whom he recorded her CD The Russian Album on the stage of the Mariinsky Theater in 2006 .

In January 2013, the Munich city council designated Gergijew as the successor of Lorin Maazel, who died in July 2014, as chief conductor of the Munich Philharmonic. Gergijew took office on September 17th, 2015. On July 25th, 2019 he had his Bayreuth debut in the new production of Tannhauser by Tobias Kratzer . 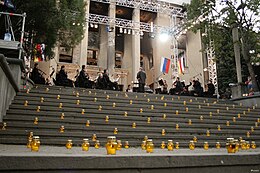 In the military conflict between Russia and Georgia , Gergiev sided with Russia. When the Russian army occupied the internationally unrecognized republic of South Ossetia, Gergiev, who is himself Ossetian, played on August 21, 2008 in the ruins of the South Ossetian capital Tskhinvali Shostakovich's Leningrad Symphony , which was composed in the fall of 1941 in besieged Leningrad. “We are here so that the world may know the truth. We are obliged to commemorate those who died tragically as a result of Georgian aggression, ”said Gergiev on the occasion of the memorial concert.

In 2012, Gergiev's advertising clip appeared on Russian television for the re-election of Vladimir Putin on March 4, 2012. About his “friend” Putin, Gergiev said in a 3sat interview: “Today the word 'democrat' is broadly defined. If you compare Putin with Yeltsin, he is a real democrat [...] Another friend of mine, Mikhail Gorbachev [...] wanted too many changes like complete freedom too quickly. "

On March 11, 2014, Gergiev signed the open letter from Russian cultural workers, in which President Vladimir Putin's position on Ukraine and Crimea is supported. In the letter, the “common history” and “the common roots, our culture and its spiritual origins, our basic values” and “language” are emphasized as the unifying element of both states and the desire for a “stable future” is expressed. The signatories of the letter were heavily criticized by Russian and Ukrainian artists. The Ministry of Culture of Ukraine then drew up a “black list” of the artists who, through their support for Putin's position, are classified as a threat to the “national security” of Ukraine. Gergiev was also heavily criticized in Germany for his signature and his contractually existing position as chief conductor of the Munich Philharmonic seemed to be endangered. Gergiev responded to the criticism with an open letter.

Chief Conductor of the Munich Philharmonic