Tannhäuser and the singer's war on Wartburg

Tannhäuser and the Singers 'War on Wartburg is a romantic opera in three acts by Richard Wagner , which builds on the traditional folk ballad Tannhauser and the Singers' War on the Wartburg . The opera addresses the dichotomy between sacred and profane love and redemption through love - a central theme that runs through many of Wagner's later works.

At the beginning of the work, Tannhäuser is inside the Venusberg (this is the Hörselberg near Eisenach ). The world of Venus is dedicated exclusively to sensuality. Tannhäuser found his way here as a mortal, but is visibly tired of the enjoyment ("If a god can always enjoy, I am subject to change"). Venus tries to persuade her knight to stay and prophesies that the people of Tannhauser would never forgive his stay with the pagan goddess of love: there he will never find his salvation. Tannhäuser, however, sticks to his decision: "My salvation rests in Maria!" When Mary invokes the world of Venus sinks, and Tannhäuser sees himself transferred to a lovely forest valley in Thuringia at the foot of the Wartburg. He is reconciled with the knights he had once left and wants to take part in a song festival that is set for the next day, also to win the heart of Elisabeth, the landgrave's niece.

In the second act, Tannhäuser and Elisabeth meet again for the first time. In a dialogue between the two of them and a conversation between Elisabeth and the Landgrave, the ideal connection between the two is barely covered. The song festival begins, with each of the participants singing about the essence of love. Tannhäuser gets more and more furious, even before his turn, because he notices that the other minstrels obviously have no idea of ​​the true sensuality that he experienced in Venusberg. This leads him, when he is supposed to sing praises of love, to the confession that he has been in the Venusberg, whereby he arouses disgust and general indignation according to the moral laws of the time and is condemned by the prince. The invocation of or staying with pagan gods was always idolatry and idolatry. Only at the intercession of Elisabeth is Tannhauser allowed to join the pilgrims who move to Rome to repent and ask for forgiveness.

In the third act we see Elisabeth waiting in vain for Tannhauser to return; he is not among the returning pilgrims who have found grace in Rome. Desperate, she withdraws; she silently refuses to escort Wolfram . In a sad song, Wolfram sings of the premonition of death that covers the land like twilight. Tannhäuser is approaching. He has been to Rome but has not found forgiveness (Roman story). The Pope (in the legend it is Urban IV. ) Said, pointing to his priest's staff: "As this staff in my hand never again adorns itself with fresh green, redemption from the hot fire of hell can never blossom into you." Tannhauser is desperate and now longs to return to the realm of Venus. This also appears, but Wolfram prevents Tannhäuser from taking the desperate step. He calls out Elisabeth's name, whose request to be allowed to die for Tannhauser's forgiveness has since been fulfilled. Venus disappeared instantly. Tannhäuser dies, with his last words asking Elisabeth for help from God. Pilgrims bring the wonderfully blossoming priest's staff from Rome: “He has adorned the dry staff in the priest's hand with fresh green” - a sign that God himself granted Tannhauser redemption. After the praise of God through the choir: "God is high above all the world, and his mercy is not mockery!" The work closes with the sentence: "The grace of salvation is granted to the penitent, he now enters into the blessed peace!" 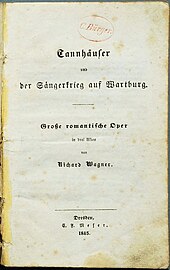 Tannhäuser is Wagner's fifth completed opera and was written from 1842. It is based on two originally independent sagas, that of Heinrich von Ofterdingen and the singer's war on the Wartburg at the time of Landgrave Hermann I of Thuringia (died 1217) on the one hand, and that of Tannhäuser , who for his lingering in Venusberg sought forgiveness from Pope Urban IV (Pope 1261-1264). In Ludwig Bechstein's collection Die Sagen von Eisenach and the Wartburg, Hörselberge and Reinhardsbrunn from 1835, these two events - at least 50 years apart, but very likely fictional - are reported very closely together, which probably gave Wagner the idea of ​​turning them into a plot and to merge the figures of Heinrich von Ofterdingen and Tannhauser into one figure. Incidentally, Bechstein was not the discoverer of fabrics either. Both can already be found in the German sagas of the Brothers Grimm , and that of Tannhäuser in Des Knaben Wunderhorn . According to Wagner's testimony in his autobiography Mein Leben , he also knew at least two literary versions of the sagas: Ludwig Tieck's story Der getreue Eckart and Tannhäuser and ETA Hoffmann's novella The Struggle of the Singers from Die Serapionsbrüder .

The libretto and score were written with interruptions within three years; the premiere took place on October 19, 1845 in the Royal Saxon Court Theater in Dresden .

The version of the world premiere represents stage 1 in the Wagner work directory (WWV). Immediately afterwards Wagner made the first changes: he shortened the introduction to the III. Act ( Tannhäuser's pilgrimage ) and at the end let Venus appear again and stage the funeral procession of Elisabeth. He also allowed various cuts, mainly for two reasons: on the one hand, because the title role is (still) one of the most strenuous and difficult in the tenor repertoire and, on the other, to shorten scenes with silent play, which the singers of the 19th century rarely performed to the satisfaction of the composer. Wagner explains the changes and possible shortening in detail in 1852 in his work On the performance of Tannhäuser . In 1860 he succeeded in having the score re-engraved by Breitkopf & Härtel with the changes and variants that had been valid until then. This has reached stage 2 of the WWV. This version (not that of the world premiere) is usually referred to as the stage version or the Dresden version .

In 1861 Wagner had the opportunity to perform Tannhäuser at the Paris Opéra . For this purpose, Charles Nuitter and others worked closely with the composer on a French text version. In addition, a ballet was compulsory for the second act, which Wagner initially categorically rejected. However, he soon decided to have the Venusberg scene preceded by a bacchanal (by the standards of that time it could hardly be called a ballet) and, above all, to redesign the subsequent duet musically. The new version shows clear influences of the work on Tristan und Isolde in terms of harmony and instrumentation . He also added to the choir at the end of the III. Acts strings and harp added. The Paris performances in French form stage 3 on WWV. The fact that the Paris performances did not help Wagner achieve a breakthrough in France was only to a small extent due to the fact that there was no ballet in Act II, but much more to the altogether unfamiliar and novel structure of the work.

For model performances in Munich in 1867 and Vienna in 1875, the composer only made one major change: from now on the first scene was to follow the overture immediately , with it being shortened by a few bars in Munich and the second half in Vienna. The strokes made in Paris by local circumstances were opened again. Stage 4 of the WWV thus reached is generally referred to as the Paris version (the correct version would actually be the Vienna version or the final version ).

Even during his lifetime Wagner planned to include the Tannhäuser in the repertoire of the Bayreuth Festival , although he was undecided whether he should give preference to the Dresden or the Vienna version or a new one that again approximated the Dresden version ( cf.Cosima's diary entries 6 November 1877, March 13, 1881 and January 23, 1883). Tannhäuser was first played in Bayreuth in 1891.

Duration (using the example of the Bayreuth Festival) 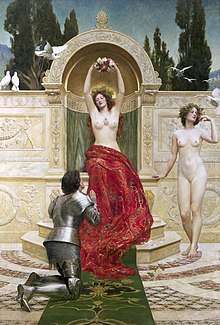 Image for the opera by John Collier

At the Bayreuth Festival it was customary to document the length of the individual lifts, but not all years were recorded there. The type of voice and the temperament of the singers also influenced the duration. In the case of Tannhauser, different versions led to greater time differences than usual between performances by different conductors.

* Not always representative due to the staging of different versions. Percentages refer to the shortest duration.

Reception going beyond the music

In a more recent reception, Wagner's opera is viewed against the background of game theory . Within an economic study, an analysis of "Tannhauser's dilemma" as a problem of rational decision-making is carried out. The hero faces a dilemma in the singing war: if he loses in the competition, he loses his beloved Elisabeth; but if he wins and marries Elisabeth, he takes the opportunity to repent and thus makes his sins worse. The apparently irrational, because self-damaging commitment to Venus is therefore still the best (utility-maximizing) way out.