The title of this article is ambiguous. Further meanings are listed under tenor (disambiguation) . 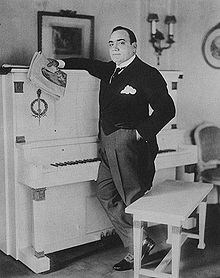 As Tenor (. Stress on the second syllable, Pl tenors ) both the high male is singing - Register (formerly: as well as a singer tenor ) designated by this voice. The name was formed with the beginning of polyphony out as one voice that the Cantus firmus held , tenor (from Latin tenere "hold") called while circulating around dissenting votes countertenor were called.

The notation of the tenor part is usually in the downward octaving treble clef . The tenor voice shares a grading system with the bass line, for example when SATB -Chorsätzen which are listed on two staves, they will untransposed in the bass clef notes.

The pitch range of the tenor voice ranges from c (also B) to a '(also c "). The center of the tenoral tessitur lies in most parts between f and g', the entire range of common parts between c and a ' Belcanto are the top notes above the a '(the proverbial "high C") as a particularly emotional means of expression and also as a tenoral record of performance. In ancient music , however, the penetrating sound of the tenoral top note was not desired. There notes above the a' are rarely closed Find.

In the opera Mitridate, re di Ponto by 14-year-old Wolfgang Amadeus Mozart, the tenor is played in the full range from c to c '', both as a through note and as an exposed top note. The highest note that occurs in operatic literature for a tenor is f '' (another fourth above the high C), for example in ensemble passages in the opera La Cenerentola by Gioacchino Rossini and in the aria of Arturo in the opera I puritani by Vincenzo Bellini . This very high tenor voice, which was mainly used by Rossini at the beginning of the 19th century, is also known as "tenore contraltino". It is doubtful whether these parts were actually sung with a chest voice throughout .

Another high variant of the tenor voice that is very similar or identical to the “tenore contraltino” is the “haute-contre”, which, unlike the countertenor, is not sung in falsetto but, like the “tenore contraltino”, in the chest voice. It occurs mainly in French baroque music . One example is the role of the platée in the lyrical comedy of the same name by Jean-Philippe Rameau . The vocal range of the "haute-contre" goes from d or e to d ''.

Approximate pitches of the different voices

The pitch of the tenor can be roughly divided into vocal subjects , which characterize the voice with regard to its quality, its range, its volume and with regard to the singing and performance requirements. This classification resulted mainly from practical stage habits in order to assign suitable roles to singers:

Hardly any singer has sung parts from one vocal subject during his career. Fritz Wunderlich, for example, was originally a purely lyrical tenor who, towards the end of his life, sang more and more roles from the field of tenore lirico spinto and even the teenage heroic tenor . Francisco Araiza , a lyric tenor who, together with Fritz Wunderlich, forms one of the last two references as a Mozart tenor, has roles in all categories, from the Count (The Barber of Seville, Tenore di Grazia) to Rodolfo, (La Boheme, Tenore Spinto) , Lohengrin and Stolzing (youthful heroic tenor) through to Siegmund (Die Walküre, heroic tenor). Plácido Domingo , actually a tenore spinto , has sung roles from all other categories during his career: from Nemorino (love potion, tenore di grazia ) to Don Ottavio (Don Giovanni, lyrical tenor), Max (Freischütz) and Lohengrin (youthful heroic tenor) to Parsifal and Tannhauser (Heldentenor).