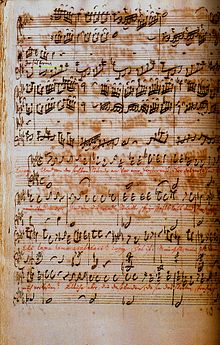 Beginning of a recitative of the St. Matthew Passion, the words of the Bible written in red

The evangelist in an oratorio or passion is usually a tenor who reads the text from the Bible verbatim in recitative . In the oratorio, the evangelist, as the narrator, provides the plot guide. He presents the general plot to the audience in recitatives.

In the works of Johann Sebastian Bach , this voice is mainly found in the St. John Passion , the St. Matthew Passion , the Christmas Oratorio and also the Ascension Oratorio Praise God in His Reichen , BWV 11.

In contrast, the Vox Christi (Latin for Christ's voice ) in Bach's works, including some cantatas , is almost always occupied by a bass .

The games of other individuals who are involved with interjections are called soliloquents . The direct speech of groups such as the disciples of Jesus , the soldiers or the people will, mostly in so-called Turba choirs played.

Various tenors are best known for their design of the evangelist in Bach's works, including: