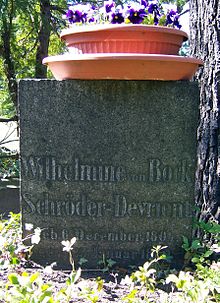 Wilhelmine Schröder-Devrient's grave in the Trinity Cemetery in Dresden

Wilhelmine Henriette Friederike Marie Schröder-Devrient b. Schröder (born December 6, 1804 in Hamburg , †  January 26, 1860 in Coburg ) was a German opera singer ( soprano ). She is considered the greatest German vocal trumpeter of the 19th century.

Wilhelmine Schröder-Devrient was the daughter of the Hanover-born actor and singer Ernst Friedrich Ludwig Schröder and his wife, the actress Sophie Schröder , born Bürger. As a five-year-old she performed in Hamburg as the dancing " Amorine ". At the age of ten she became a member of the Horschelt Children's Ballet in Vienna , then switched from ballet to drama and, at the age of 15, first appeared as Aricia in Racine's Phaedra .

She made her debut as an actress at the Burgtheater in Vienna and then studied singing . In 1821 she sang Pamina in Mozart's Magic Flute in Vienna and, at the age of 17, the title role in Beethoven's Fidelio . In 1823 she went to Dresden with her mother , where Johann Aloys Miksch's pupil first sang Cordelia in Conradin Kreutzer 's monodrama of the same name, as in Vienna , Emmeline in Joseph Weigl's opera Die Schweizer Familie at the Theater auf dem Lincke'schen Bade , and one engagement accepted at the court opera . She stayed there as a court opera singer until 1847. She was married to Carl Devrient from 1823 and lost their four children in the divorce in 1828.

On August 29, 1847, she married the Saxon officer David Oskar von Döring, a cheater, and took her leave of the stage because she was not allowed to appear as an officer's wife. This was followed by a financial collapse and a divorce in late 1848. In 1849 she took part in the Dresden May Uprising and was temporarily arrested. On March 14, 1850, in Gotha , she married the 14 years younger Livonian landowner Heinrich Anton Hermann von Bock , the brother of the publicist and composer Woldemar von Bock , whom she followed to his homeland. In 1852 she returned with him to Germany and lived alternately in Berlin and Dresden.

In 1856 she returned to the public as a concert singer with songs by Schubert , Beethoven and Felix Mendelssohn Bartholdy . In 1859 she finally said goodbye to the stage after suffering from cancer . She lived in Coburg for the last five months, where she was looked after by her sister Auguste Schröder-Gerlach and finally succumbed to her ailment in 1860. She was buried in the Trinity Cemetery in Dresden.

On April 7, 2019, an episode of the NDR's Lieb & Teuer program was broadcast, moderated by Janin Ullmann and filmed in Reinbek Castle . In it, a lacquer picture on tinplate was discussed with the art historian Wilhelm Hornbostel , which was painted around 1840 by a painter from the Braunschweig Manufactory by Heinrich Wilhelm Stockmann based on a lost portrait of Adolf Henning showing Wilhelmine Schröder-Devrient.

"Dresden has the two greatest women of today, the Sistine Madonna and the Schröder-Devrient."

“That something like the representation of this Swiss girl cannot be recognized and handed down as a monument to all times, I must now recognize as one of the most sublime sacrificial conditions under which wonderful dramatic art only reveals itself, which is why this, as soon as such phenomena announce oneself, cannot be held high and holy enough. "

"She had no voice at all, but she knew how to handle her breath so beautifully and to let a truly feminine soul flow through it so wonderfully that one thought neither of singing nor of voice."

“I also believe that the last actress Leonore died with Schröder-Devrient. She had known Beethoven and perhaps had heard words from him about the loyalty of women! " 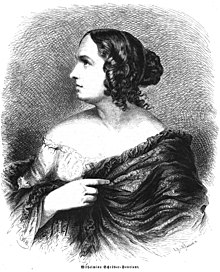