The title of this article is ambiguous. Further meanings are listed under The Flying Dutchman (disambiguation) .

The Flying Dutchman , "Romantic Opera in Three Acts" (that's the original name), is an opera by Richard Wagner , which was premiered in 1843.

The story of the Dutch captain Bernard Fokke provided the material for the plot (see the legend of the Flying Dutchman ). Unlike many other seafarers, this one did not succeed in circumnavigating the Cape of Good Hope . He tried to defy God and the forces of nature, but did not fight them because he cursed them, and has since been doomed to cruise the world's seas forever with his ghost ship . Anyone who met this ship with its black mast and blood-red sails was destined to be unhappy.

Richard Wagner wrote the opera under the impression of a stormy voyage and moved the plot from the Cape of Good Hope in the original version from 1841 to Scotland, and later to Norway. The piece is often seen as his breakthrough in his own style. The original version of the opera was completed in 1841 and premiered on January 2, 1843 with moderate success at the Royal Court Theater in Dresden . It was canceled after just four performances. In 1860 Wagner then revised the original version, musically in particular the overture and the ending were changed.

Richard Wagner took up the position of music director at the theater in Riga in August 1837 . There he was 1837/38 by the memoirs of Schnabelewopski of Heinrich Heine first time on the legend of the Flying Dutchman attention. In 1839 he lost his job and, for fear of his creditors whom he could not pay, was forced to cross the Russian - East Prussian border and flee. He booked a passage on the schooner / barque Thetis to London. The journey, which lasted more than two weeks, was delayed by stormy seas, and the ship was almost in distress. Wagner got to know some characteristic motifs and sailor customs both in the port of Pillau and on the crossing to England from the sailors. On the way, the ship called twice at Norwegian ports because of the raging storm, one of which, Sandvika near Tvedestrand , is quoted by name in the factory. For Wagner, everything he experienced was a lively color scheme for the later work.

Richard Wagner described in his autobiography Mein Leben how lastingly these two weeks at sea brought the mood and character of the saga before his eyes and became an inspiration for him. He initially relied on Heine's story, but made a decisive and essential change: He added the additional figure of Erik, so that his main female character, whom he then called Senta , was placed between this actual lover and the dreamed-of mystical figure of the Dutchman - and is torn. The longing for the eternal loyalty of a beloved woman is the central theme of this work.

After a short stay in London, Wagner traveled on to Paris, his real destination. In what was then the center of the music world, he was only able to earn a living with difficulty and through poorly paid writing and translation activities. In this emergency situation he also had to sell his draft for the Flying Dutchman to the Paris Opera (it was set to music under the title Le vaisseau fantôme - “Das Geisterschiff” by Pierre-Louis Dietsch ), as he did not succeed in commissioning a composition for it himself to get. From the beginning of 1841, however, he began to compose the work himself, the orchestral sketch of which he finished in August with the comment “In Noth und Sorge”; in November the work was completed along with the score. Attempts to have it premiered in Berlin were unsuccessful.

Richard Wagner left Paris in April 1842 for Dresden, where his work Rienzi had been accepted for the premiere. After the brilliant success of this work, nothing stood in the way of the world premiere of his Flying Dutchman , which took place on January 2, 1843, also at the Dresden Court Theater.

The Daland's ship gets caught in a heavy storm and anchors in a sheltered bay not far from the home port. While the crew is resting, the ship of the Dutchman appears there, as if out of nowhere, who once blasphemously swore that he would never cease to circumnavigate the Cape of Good Hope , and who was therefore actually condemned to do so for to be at sea forever. He is only allowed to go ashore every seven years. If he found a woman there who would remain loyal to him, he and his team would be redeemed. Seven years have just passed again ( the deadline has passed - and again seven years have passed. The sea throws me ashore tiredly ... ); the Dutch desperately hopes for the unreserved love of a woman so that he can regain his mortality and finally die:

“I should only have one hope, only one hope to
stand unshaken:
as long as the earth is sprouting,
it must perish.
Judgment Day! Judgment Day!
When do you start in my night
When does it boom, the destructive blow
with which the world collapses?
When all the dead rise,
then I will perish in nothing, in nothing ...
You worlds, your course ends!
Eternal destruction, receive me! "

Nevertheless, he woos Daland for the hand of his daughter Senta. Daland, impressed by the rich treasures the Dutchman has collected on his journey, agrees. After the storm subsided, the two ships sail towards Daland's home. 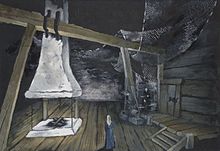 Singing and spinning, the girls await the return of their loved ones going to sea in a room. Only Senta refuses and instead performs the ballad of “The Flying Dutchman”, whose fate touches her. Senta is courted by the young hunter Erik, who is concerned about the dreams of his loved one, who always seems to forget everything else in front of the gloomy image of the seafarer. Senta feels called to redeem the “poor man”. Desperate Erik leaves the girl when Senta's father enters the room with the Dutchman. Senta now knows that she is destined to accomplish the work of redemption. An intimate understanding is established between her and the Dutchman, and the connection is being prepared.

In the third elevator the sailors prepare for the festival ( helmsman leave the watch ). They boldly try to invite the crew of the Dutch ship, but only frightening ghostly roar echoes from the ship, so that they flee in horror and fear. Erik asks Senta once again to remember her earlier familiarity and love, and reminds her that she has vowed eternal loyalty to him, which Senta denies with horror. The Dutchman who entered has overheard the conversation and is sure that Senta cannot and will not be faithful to him either. In order to save her from damnation, he tells her (what she has long known) about his curse ( experience the fate from which I save you ). He rushes to his ship in order to remain unsaved for ever. But Senta pursues him, announces again loudly that she will be faithful to him [...] until death , and throws herself from the rock into the sea. Immediately the Dutchman's ship sinks into the waters. The Dutchman is redeemed. - In a later correction of the ending (1860) you can see the Dutchman and Senta rising from the sea to the sky to the music with the “redemption motif”. 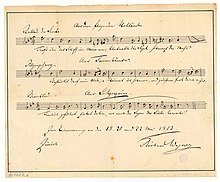 Wagner's Holländer, his fourth completed opera, is on the threshold of a well-composed musical drama . While one can speak of an "infinite melody" from Lohengrin onwards , the "number opera character" still prevails in the Dutch . Recitatives , ballads , arias , duets and choir numbers can still be clearly recognized. In order to underline the “ballad character” of the work, it should be played through without pauses, according to Wagner's intention, but this is not always practiced. At the center of the work is the ballad of Senta, which sums up the rather rugged character of the entire work well. The dark and impulsive tone is already struck by the stormy overture of the work. The Dutchman's aria is in this tone when he appears in the first act. The predominance of closed song forms extends over the first two pictures. The musically impressive representation of the forces of nature is characteristic of the entire opera. Strings make high waves thunder on the rugged Norwegian coast, storms and lightning are denoted by brass , especially trombones and trumpets, and concise musical motifs. The “Johohoe” of the sailors of the ghost ship seems almost eerie, while the world of Daland and his men is drawn more comfortably Biedermeier. As one of the most famous opera choirs, the sailors ' choir shows at the beginning of the third picture the incompatibility of reality and vision: the seemingly powerful song of Daland's sailors is slowly overlaid and almost absorbed by the unreal sounds from the Dutch ship.

It is remarkable that in 1880, three years before his death (1883), the composer was still thinking of revising and improving his work from 1841, which had long been successfully played everywhere. At the Bayreuth Festival , The Flying Dutchman was first performed in 1901 in a production by Siegfried Wagner and under the musical direction of Felix Mottl . This completed the “canon” of Wagner's works that have been performed in Bayreuth to this day.

At the Bayreuth Festival it was customary to document the length of the individual lifts, but not all years were recorded there. Even with the same conductor, the duration differed from year to year and performance to performance. The type of voice and the temperament of the singers also had an influence on the duration.

This was followed by productions in

From 1870 the opera was also played in translations:

On the performance history: