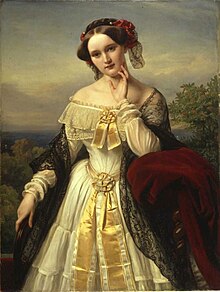 Mathilde Wesendonck, 1860, after a portrait by C. Dorner 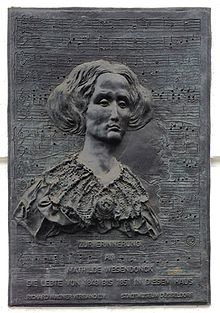 Bronze plaque by Bert Gerresheim at Schwanenmarkt 1: “ In memory of Mathilde Wesendonck. She lived in this house from 1848 to 1851. Richard Wagner Association eV Stadtmuseum Düsseldorf " 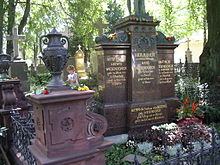 The grave of the Wesendonck family after a privately initiated gilding of the inscriptions and cleaning, August 31, 2012, in the Old Cemetery, Bonn

Agnes Mathilde Wesendonck , née Agnes Luckemeyer , (born December 23, 1828 in Elberfeld (now part of Wuppertal ); † August 31, 1902 in the Villa Traunblick in Altmünster , Austria ), was a German writer . She gained fame especially as the muse of the composer Richard Wagner .

Mathilde Wesendonck was born in Elberfeld as the daughter of the royal councilor Carl Luckemeyer (1801–1875) and his wife Johanna (1801–1862), née. Stein, born and spent her childhood and youth in Düsseldorf , where she attended a school for secondary daughters .

In 1848 she married the merchant Otto Wesendonck, who had become very wealthy through the silk trade . Out of love for her husband, the born Agnes Luckemeyer took the first name of Otto Wesendonck's first wife, Mathilde , who died early .

After their marriage, she lived with him in Düsseldorf on Schwanenmarkt , with a longer stay in New York in 1850, followed by moving to Zurich in 1851, where they initially lived in the Hotel Baur au Lac .

The couple met Richard Wagner in Zurich in 1852 , and developed a close friendship with him. Otto Wesendonck supported the political refugee Richard Wagner, who had participated in the uprisings in Dresden in 1848, extremely generously financially and enabled him to live and work in Zurich until 1858.

Since Wagner was heavily in debt throughout his life, but at the same time did not want to forego his costly lifestyle, there was a close material dependence on the Wesendonck couple, who also proved to be equally generous towards other artists. Wagner and his wife Minna were allowed to live in a simple half-timbered house in the garden of the newly built Villa Wesendonck .

Wagner was recognizable by the fact that he repeatedly dedicated compositions to the Wesendonck family. He composed the Zurich Vielliebchen Waltz for Mathilde's sister, Marie Luckemeyer (1838–1872) .

Not least because of the close proximity of the half-timbered house to the Villa Wesendonck, Mathilde Wesendonck and Richard Wagner developed a deep kinship: Mathilde became Wagner's muse. In her he found understanding for his artistry, which his own wife Minna could not give him.

In 1857 and 1858 Richard Wagner set five poems by Mathilde Wesendonck to music, initially referred to as five poems for female voice and piano , which later became famous as Wesendonck lieder . The titles “Angel”, “Stand Still”, “In the Greenhouse”, “Pain” and “Dreams” refer to death, longing, desire and eternal love in direct and hidden allusions.

The close platonic relationship between Wagner and Mathilde Wesendonck ended abruptly in the summer of 1858 when Wagner's wife Minna intercepted a misleading letter from her husband to Mathilde and provoked a scandal that led to the separation. Wagner left Zurich to deal with the conflict in Venice, now alone, and to continue composing the opera Tristan und Isolde .

It was precisely the triangular situation between him and the Wesendonck couple that inspired him to write the opera Tristan und Isolde - with unmatched forms of expression such as the Tristan chord . In this opera, the two lovers Tristan and Isolde cannot come together on earth, because they are both already obliged differently, namely King Brand. The lovers find refuge in the desire to meet to unite after the consciously longed-for death.

The highlight is the famous final aria “Mild und Leise” , also called “Isolde's love death ” , in which Isolde transfigured her love for Tristan. Both - Tristan and Isolde - unite spherically in the universe, carried by waves of love and music.

With this opera Wagner set a musical as well as a literary monument to his love for Mathilde Wesendonck.

Wagner's music was fundamentally changed by the opera Tristan und Isolde and thus by his deep bond with Mathilde Wesendonck. References to this can be found again and again in Wagner's later life. He dedicated the prelude to the Valkyrie with the initials GSM - "Blessed be Mathilde". His saying to a mutual confidante became famous: "She is and remains my first and only love."

Wagner's second wife, Cosima Wagner , daughter of Wagner's friend and composer Franz Liszt, tried to destroy the close relationship between Wagner and Mathilde Wesendonck. She burned all of Mathilde's letters to him, so that today only letters from Wagner to Mathilde Wesendonck have survived for posterity.

In 1872 Mathilde moved with her husband to Dresden and in 1882 to Berlin , where they initially lived in Thiergarten - opposite the later Wagner monument . Later they built a large villa in the immediate vicinity of the Reichstag (today near the Federal Chancellery).

Bonn plays a recurring role in the life of the Wesendonck family. Mathilde Wesendonck's brother-in-law, the brother of her husband Otto, later a member of the Paulskirche , Hugo Wesendonck , had studied law in Bonn from 1834 to 1837 and was one of the founders of the Corps Saxonia in Bonn.

Otto's long-standing business partner Wilhelm Loeschigk (1808–1887) bought the famous Palais Schaumburg after his return from the USA in 1860 , which is now the second official residence of the Federal Chancellor.

Mathilde's son Karl had also studied physics in Bonn. Daughter Myrrha (1851–1888) had been married to Moritz von Bissing since 1872 . He was stationed for a good 10 months as Rittmeister in the regiment of the Royal Hussars in Bonn and later became Colonel General Moritz Freiherr von Bissing.

When Otto and Mathilde Wesendonck and their daughter Myrrha were on a journey through Upper Egypt at the end of 1881 / beginning of 1882, Mathilde's son Hans died on February 28, 1882, who had only recently started studying law in Bonn. In the absence of the ignorant parents, the captain and son-in-law Moritz von Bissing, stationed in Bonn, arranged for the burial of young Hans in the old cemetery in Bonn .

Therefore, after their return, Otto and Mathilde Wesendonck built their family grave in Bonn. Mathilde, husband Otto and their two children Hans and Myrrha are buried here today. The son Paul, who died at the age of four months, is in Düsseldorf, Guido, who died at the age of three, is buried in Zurich next to the villa and the only child who survived his parents, son Karl, died in 1934 in Ticino at the age of 77.

“I dug a grave
And put my love in it
And all my hopes and longings
And all of my tears
And all of my bliss and pain.
And when I carefully bedded her -
I put myself in there. "
(Mathilde Wesendonck, July 3, 1863 in a letter to Wagner)

After being gilded in 2012, the Wesendonck family grave is considered one of the most beautiful graves in the listed Old Cemetery. The genius was created by Gustav Adolph Kietz , who u. a. had contributed to the famous Goethe-Schiller monument in Weimar, created as a unique piece. The exposed open location and the design of the grave complex show the prosperity of the Wesendonck family.

The grave, like the grave of Robert and Clara Schumann, which is only a few meters away, is fenced in with opium poppies - as a symbol of hope that death is just a long sleep from which one wakes up again. The tombstone itself is made of red granite.

It should be noted that Mathilde Wesendonck, in a letter to Johannes Brahms, spoke out in favor of cremation, which appeared in the 19th century. However, this was not permitted in the Bonn cemetery.

Although Mathilde Wesendonck never lived in Bonn herself, after the death of her parents, the heirs left the Wesendonck's impressive collection of paintings on loan to the city of Bonn for 99 years. The city of Bonn donated the family portraits of Mathilde, her husband Otto, as well as the pictures of their daughter Myrrha and their two sons Hans and Karl, as well as the painting by Richard Wagner to the then municipal museum Obernier - which later became the city ​​museum of Bonn . These paintings can still be viewed there today, especially the famous painting by Karl Ferdinand Sohn, which depicts the young Mathilde.

The rest of the collection, predominantly Dutch paintings, was given to the Provincial Museum , today's Rheinisches Landesmuseum Bonn . This collection was recognized as so large and important that the Provincial Museum at that time had to be structurally expanded by a good half, and was no longer a closed scholarly museum, but was open to the public.

The city of Bonn bought the collection in 1925, but pieces from it were sold only a few years later. Four of the pictures that remained in Bonn are still part of the permanent exhibition of the Rheinisches Landesmuseum Bonn.

In the western part of Bonn there has been a Wesendonck-Strasse since 1951, which ends in Richard-Wagner-Strasse, which was laid out in 1900. Bonn thus stands for the union longed for by Richard Wagner in the opera Tristan und Isolde - in death.

The Richard Wagner Association took over the greening of the grave.

On the initiative of the Mathilde Wesendonck Association, commemorations were held for the first time in 2013 and 2014 on August 31, the day Mathilde Wesendonck died, with well-known Bonn artist groups, to which more than 200 interested people attended.

In 2013/2014, the Bonn City Museum organized an exhibition on Wesendonck in Bonn , which was visited by over 1000 people. Were shown u. a. the family pictures of the Wesendoncks, including the painting by Karl Ferdinand Sohn.

In August 2014, on the initiative of Sibylle Wagner (coincidentally identical name), a great recital in honor of Mathilde Wesendonck took place in the "Grandhotel Petersberg", the guest house of the Federal Republic of Germany. In 2017, a good 800 listeners attended a concert on the theme of Beethoven's Dreams - to which the five Wesendonck songs were also performed.