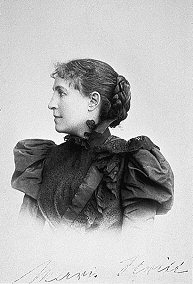 Marie Stritt (born February 18, 1855 in Schäßburg , Transylvania , Austrian Empire as Marie Bacon ; †  September 16, 1928 in Dresden ) was a German theater actress and women's rights activist who, as President of the Federation of German Women's Associations, campaigned for the abolition of Section 218 .

Marie Stritt was born as Marie Bacon on February 18, 1855 in Schäßburg. As the oldest of ten siblings - six of whom died in childhood - she came from a German family of lawyers in Transylvania. Her father, Josef Martin Bacon (1820–1885), was among other things a Hungarian member of the Reichstag . Stritt's brother, Josef Bacon (1857–1941), was a city physician and founder of the local history museum in her hometown.

The mother Therese Bacon was already involved in women's politics at a time when a larger women's movement did not even exist. It was also her mother who introduced Marie Stritt to the Dresden women's movement in the early 1890s.

In 1873 Marie Stritt left Schäßburg to become an actress. She attended the Vienna Conservatory and received her first engagement in Karlsruhe in 1876 . There she made her debut as " Käthchen von Heilbronn " and as "Marianne" in Die Geschwister . There she remained in the field of lovers until 1881. This was followed by Frankfurt am Main , where she soon canceled her contract and only worked as a guest, u. a. in Hamburg and Dresden .

Stritt married the opera singer Albert Stritt (1847-1908), with whom they had two children. In 1889 she said goodbye to the stage and settled in Dresden. From 1894 onwards she became increasingly involved in the women's movement - not least inspired by her mother.

The Berliner Illustrierte Zeitung brought 1904, the BDF-President Marie Fougere on its title page.

Marie Stritt is an important pioneer of the German women's movement. Thanks to her acting training, she was considered one of the best speakers in the women's movement. Between 1891 and 1896 Stritt was a member and temporarily chairwoman of the Reform women's association . In 1894 she founded the first legal protection association for women in Dresden . In 1896 she was co-initiator of the protest campaign Frauen-Landsturm against the draft of the Civil Code . From 1899 to 1910 she was chairwoman of the Federation of German Women's Associations . From 1900 to 1920 Marie Stritt was the editor of the BDF's publication organ. This publication appeared until 1913 under the title "Centralblatt", then it was renamed "Frauenfrage". Stritt exerted a great influence in the German women's suffrage movement . From 1911 to 1919 she chaired the German Association for women's suffrage moment and from 1913 to 1920 she was president of the World Alliance for Women's Suffrage (Engl. International Woman Suffrage Alliance ). In 1920 she was a delegate of the Reich government at the International Congress in Geneva , from 1899 to 1921 editor of the Zentralblatt des Bundes Deutscher Frauenvereine or the “Frauenfrage”, from 1919 to 1922 city councilor and 1920 to 1922 honorary councilor in Dresden. In 1919 she became a member of the extended federal executive board of the Federation of German Women's Associations and was chairwoman of the Dresden Women's Association from 1922 to 1927. In addition, Stritt was a co-founder of the Association for Women's Studies (later the Association for the Study of Women and Women).

A good 100 years ago, her portrait photo graced the first page of the largest mass illustrated newspaper , the “ Berliner Illustrirten Zeitung ”. That was in June 1904 - at the beginning of the international women's congress in Berlin, which she chaired as chairwoman of the Federation of German Women's Associations . In 1910, at the instigation of the conservative majority, Stritt was replaced as chairwoman by Gertrud Bäumer . The reason was Stritt's commitment in the federal government for maternity protection, which also campaigned for single mothers, as well as for a comprehensive sexual reform and their uncompromising advocacy against Section 218, which made abortion a punishable offense. Although Stritt belonged to the radical wing of the women's movement from her positions, she rejected any polarization and tried to mediate between the competing wings.

After Marie Stritt died in Dresden, she was buried in an urn grave in Schäßburg.

On the occasion of her resignation as chairwoman of the Federation of German Women's Associations, the Marie Stritt Foundation was set up. Your interest income should be available to Marie Stritt as income, but the capital should remain in the possession of the BDF. Due to inflation , the foundation had to be dissolved in 1923.